Turn-based strategy is something of an anomaly on mobile -it's one of the few genres which doesn't always need to be designed for super short sessions and speedy gameplay.

Tactical Monsters Rumble Arena has given short play sessions a try, however, with fast-paced, hex-based battles that feature just a handful of units on a relatively small board.

But while matches are quick to play through, and there's plenty of deck-building if that's your thing, it just isn't a whole lot of fun.

Tactical Monsters gives you a party of five monsters, a small area to place them around before battle, and then throws you into a fight against a similarly-sized squad.

You can either move or attack once per turn, or you can "wait" and store up two actions for your next turn. If you're in a tight spot, you can defend, and reduce your damage for the opponent's next turn. 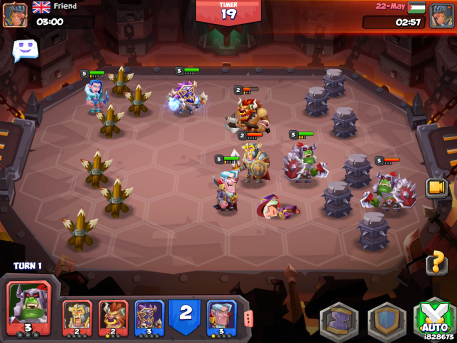 That's really about it for tactics, ironically. Beyond keeping ranged units back while your melee fighters lead the charge, there's not much else to take into account.

You can't flank your enemies - they'll counter-attack melee units no matter which side you're stood on. And there's no height bonuses, or anything else affected by the map, other than which routes you can take.

Rumble in the jungle

Once you make this realisation, it's a simple case of whacking the speed up to 4x, hitting the auto-play button, and watching the game play out without the need for your input.

You can honestly make it through the first two chapters of the campaign without even needing to try, so long as you keep your cards upgraded as you go.

The same can be said for the multiplayer. Hit a button and you'll be sent into battle against someone else from around the world who's the same rank as you. 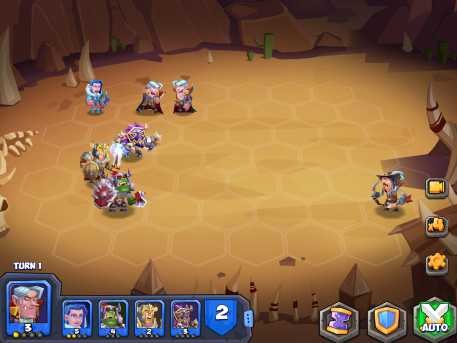 The wrinkle here is that you have three units to start with, but can summon a fourth right from the start, with no penalty, which seems slightly pointless.

And once again, if you really don't fancy playing properly, you can just hit auto-play and let the computer do the work for you.

Battles here are supposed to take no more than about three minutes, but with auto-play active, they don't seem to go on longer than a minute, and you don't even have to pay attention as it all goes down.

And that's Tactical Monsters Rumble Arena's problem. It threw out the majority of its tactics to make for a simpler experience, but then doesn't offer enough depth to make this experience compelling.

You can blaze through the competition in under a minute, sure, but when there's absolutely no reason for you to actually play the game to achieve anything, you'll question why you bothered.

It's all a bit too simple and a bit too quick, and unfortunately that stops it from being a fun, tactical experience and turns it into something shallow and joyless.

Is Machine Zone working on a huge new game?

Till the Dawn, Waiting is an emotive experience with a strong message, but this is why I won't play it

Tactical Monsters Rumble Arena is getting an iOS release