App Army Assemble: Out There Chronicles, Episode 2 - A narrative adventure worth taking?

It's a mixed bag

Out There Chronicles: Episode Two finally launched on iOS and Android, and we couldn't help but check it out. This Sci-Fi narrative gamebook won't suit everyone's tastes, but there's one sure-fire way of putting it to the test.

How will our App Army find this second installment? Let's have a look at what our team of eager gamers think of it.

I will say up front that I have never been a fan of interactive novels, so I'm reviewing from point of view of how the game, looks, feels, and plays.

I think the game sets the tone and the atmosphere quite well, helped by the music and the writing which complement each other. The graphics look to be hand-drawn and whilst there are too many of them, that is a plus as I would have thought the interactive novel aspect is better suited to you building your own image in your head based on the writing.

The game plays well and it achieves what it sets out to do with style. Would it make me change my mind and play it all the way through? Probably not. But, if you like interactive stories I expect you will enjoy this.

Deeming myself a linguist of sorts, I am used to laying special emphasis on a literary wealth of the text I am reading, and after spending 30 minutes of reading this graphic text adventure I couldn't carry on.

In the process I spotted a couple of grammar mistakes and came across some cringeworthy phrases like "The Gods want my hide", which made me reluctant to keep on reading this book. Something tells me that the text was initially written in French and then translated into English, which sometimes causes the original story to fade and lose some of its beauty.

Now I would like to point out the bright moments. First of all, you don't have to read the first episode to enjoy this one since the previous events are briskly recapped at the very beginning. Best of all, I adored the striking colourful visuals which add a lot of flavor to the story, and an enchanting, mysterious soundtrack is also worth mentioning.

I would certainly recommend this textbook app to all those, who appreciated the first part and/or are big fans of text adventures in general, which are a dime a dozen in the App Store nowadays. 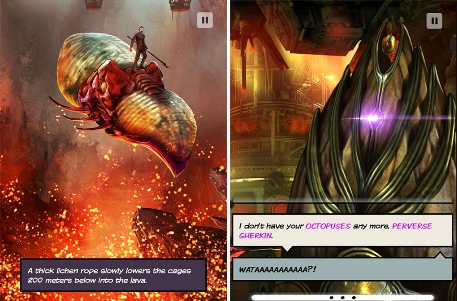 I've had the pleasure of playing a few games like this. Part of me enjoys the simplicity of calming music coupled with a storyline that feels engaging and pacey. I soon found out that you can't simply eat anything or do anything you want as these all have repercussions.

It offers a new challenge and forces you to imagine yourself in the world the devs have set for you. The artwork is pretty and can be quite creepy at times, but works well to create a game that is fun to play. This game won't be for the type of person that prefers to read less during their gaming experience, but rather for those text adventure veterans.

As Roman stated, there are a few grammar mistakes and since the developer is French I'm almost sure that is a translation problem.

The atmosphere is really well established on the game with some pretty scenary and great music. That is the core and the strongest part of the game for sure. So if you like Sci-Fi stories, like me, you'll enjoy this journey.

I like the Out There games, but for me that didn't translate to Out There Chronicles, Ep. 2. While it is a beautifully made game (music and graphics are top notch) the dialogue progression seems slow, tedious, and, well, boring. I'm sure there's a good story back there, but the slow trickle of questions and answers wasn't enough to hold my interest.

When the first real action appears you have three choices - attack, wait, and dodge to the side. To me that didn't seem to lend itself to a strategy to beat this alien monster, and I found my ten minutes of combat wasted as I was sent back to a checkpoint to start it all over again.

I think if I had been more invested in the situation before being handed what seemed a difficult combat episode, maybe I wouldn't mind. Especially if you're playing this without having played Out There Chronicles, Ep. 1, it's hard to care about the character or situation, and hard to justify restarting an early, challenging mission.

All in all, if this is typical of the genre, then it's probably a good choice for fans, but it's not something I see myself investing time in.

I'm not really into this narrative driven 'game book' genre. All of that reading drives me insane and it feels like I am doing some strange multiple choice exam. Coupled with the fact that inkle and Tin Man Games have set the bar so high with interactive story telling that for any new game to come even close to what they achieved will not be an easy task.

But back to this: it looked okay. There's lots of stuff to read and, every now and then, a choice to make. I never really got into the story as I was more interested in just tapping to get through it. The wailing woman on the sound track drove me to mute my iPhone and after about 30 minutes I called it a day.

I'm not saying this is bad, just that in my humble opinion there are much better ways to tell a story than this overused method.

Out There Chronicles Ep. 2 is billed as an interactive graphic novel and if you're a fan of that genre and enjoy science fiction this is definitely worth checking out. The art and music add a lot to the atmosphere, but there are some tedious bits.

Interactivity is limited to clicking on your desired action, but for some that might be a plus. My recommendation is to start with the first episode, it is a story after all, and continue from there. 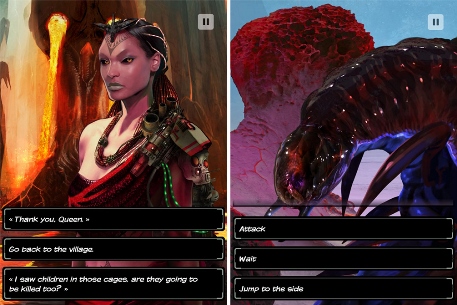 If you enjoyed the mysterious, slightly off-the-wall lore surrounding the universe of Out There Omega, chances are you'll enjoy the setting of Chronicles as both take place in the same galaxy.

The gameplay involves reading narrative and choosing from the options given to you, and as far as I can see differs little from the first Chronicles apart from in the number of opportunities the game gives you to die - something I like as the first installment felt quite easy.

Little niggles remain from the first game such as characters you were speaking to showing up for a second or two upon changing location and the odd English phasing in some of the text.

I'm a big fan of the Out There series so perhaps it's no surprise I enjoyed Chronicles. If you are as well or are just looking for a gamebook to scratch a Sci-Fi itch give Out There Chronicles a try.

I've never played the Out There games before, but I've got to say I'm enjoying this one. Nice visuals, great music, and an interesting story.

I could use more frequent save points as dying can send you back a long way, but it's not a major problem. It's a good game and I would recommend it.

I love graphic novel games and this one was quite enjoyable if a little flawed. The plot is a continuation from the original part one, but you don't have to read/play it because there is a brief explanation at the start. The graphics are great but the scrolling wasn't as smooth as others of the genre I've played.

The conversation was not as sharp as it could be and after going in one direction I died after about four minutes. The most annoying thing of all was the fact that every single 'f' in the script is in capitals, and this was a definite distraction. Still, I might try the first in the series and see if it makes more sense afterwards.

Every once in a while I can get into a game book or a heavily-narrative one, but this was not one of those times

I never really felt invested in the storyline or what was going on, as something about the game's progression system and its dialogue just didn't appeal to me.

I honestly can't say what exactly it was, but I was not impressed with it and have seen a lot better.

Out There Chronicles Ep. 2 revels in putting you in a tight spot and letting you sweat over every option, often presenting just a few limited and less-than-ideal choices. The scale of artwork and imagination does a lot to relieve the macabre nature of the game itself.
SEE COMMENTS

Out There Chronicles, episode 2, calls for iOS and Android beta testers

Out There Chronicles Ep 2. is finally coming to iOS and Android in January