Columnist Jon Jordan on a question of value

Welcome to the latest in our series of Pocket Gamer columns. We're taking the best games writers in the industry and giving them a platform. Veteran journalist Jon Jordan is here each week examining the trends shaping your mobile games scene. Today: his experience of premium vs F2P... My memories of playing The Room for the first time are very clear.

I was on holiday - and I don’t go on many - in rural Sweden. It was winter and weird reflections from the snow apart, dark and cold outside.

Bunkering down on the sofa in the gloom, I was taken into another mysterious world. This one was full of physical logic puzzles and even if I can’t remember much about their specifics, I certainly remember the excitement of an evening trying to solve them.

For me, The Room was a novel experience in every sense. First because of the content. Second because of my setting. And third because - then as now - I very rarely buy mobile games.

My own internal logic on this point is faultless.

So rarely do I finish paid games, it seems a waste to pay for an experience I know I won’t complete. Hence, I will only pay for games where the experience is so interesting even a short play session is guaranteed to provide sufficient enjoyment.

For me, those games have been The Room and Monument Valley, both of which I played, didn’t get close to finishing, and enjoyed.

In contrast, I’m always playing free-to-play mobile games. At the moment I have around 10 that I attempt to play daily and another dozen I’m don’t quite get around to playing weekly. And not to forget playing all the new interesting games released every week.

The result is I’ve never played more games, or spent so much time playing games, all the while playing individual titles for a relatively short daily cumulative time.

For example, it takes me about 10 minutes to complete the daily challenges in Star Wars: Galaxy of Heroes, a game I’ve now been playing for over two years. On that basis, we’ve clocked up over 100 hours together, and I haven’t spent on it anything either.

And that’s the funny thing. On a per game basis, it’s really not about the money, but about my perception of value, and that starts with time, not money.

I’m a busy man with a growing family and time is my most precious resource, especially time in discrete blocks of time.

Most new games I’ll play for maximum 10 minutes and then decide if I’m going to delete them (which accounts for 75% of them) or put them into the "Thinking About" folder. Eventually some will make it into my "Playing" folder. 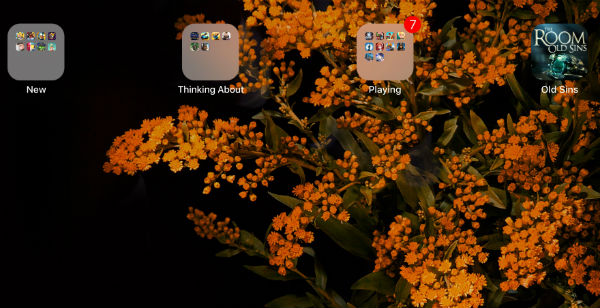 So my decision to buy a paid mobile game revolves as much about whether I have 20 to 30 minutes to devote to it right now, as the price, especially if it costs more than $3. If I don’t have that time, I’m not going to spent $3 just to have an unplayed game sitting on my iPad.

In fact, that situation is much worse, for not only would I have paid $3 for a game I haven’t played, I would have paid $3 for a game that is now reminding me I need to find 30 minutes to play it. The psychological impact of seeing the game over days, weeks and possibly months would be accumulate deeper than any enjoyment I could imagine from eventually playing it.

I’ll let you know if I got around to playing The Room: Old Sins (or given that I'm not on holiday in Sweden this time, have already deleted it in a fit of pique) next week! We'll be sharing more insight into the state of the industry next Monday and every week. Bookmark Jon Jordan's page now! And check out Susan Arendt's thoughtful dive into under-rated indie games.

Survive the snowy wilds in The Bonfire: Forsaken Lands this February

Is Machine Zone working on a huge new game?