Last week, we had a first look at strategy in Hearthstone's smash hit solo mode, the Dungeon Run. It was a run down on the best classes and their top card picks to maximise your chances to win.

That's only half the story when it comes to building your deck, however. Every other win, you get offered a special treasure as well as a new card bundle.

There's a lot of randomness in what you get offered all through the Dungeon Run. But just as with bundles, picking the right treasures can make all the difference.

The first treasure you're offered on your run is some kind of passive bonus. This is an important moment: these vary a lot in power and some are very situational. So if you get offered a duff selection, it's sometimes worth conceding the run at this early stage and starting over.

How, though, are you to judge whether the selection is any use? There are a large number of treasures, and how much they can help you is partly deck and class dependent. Here are some thoughts to help you choose. 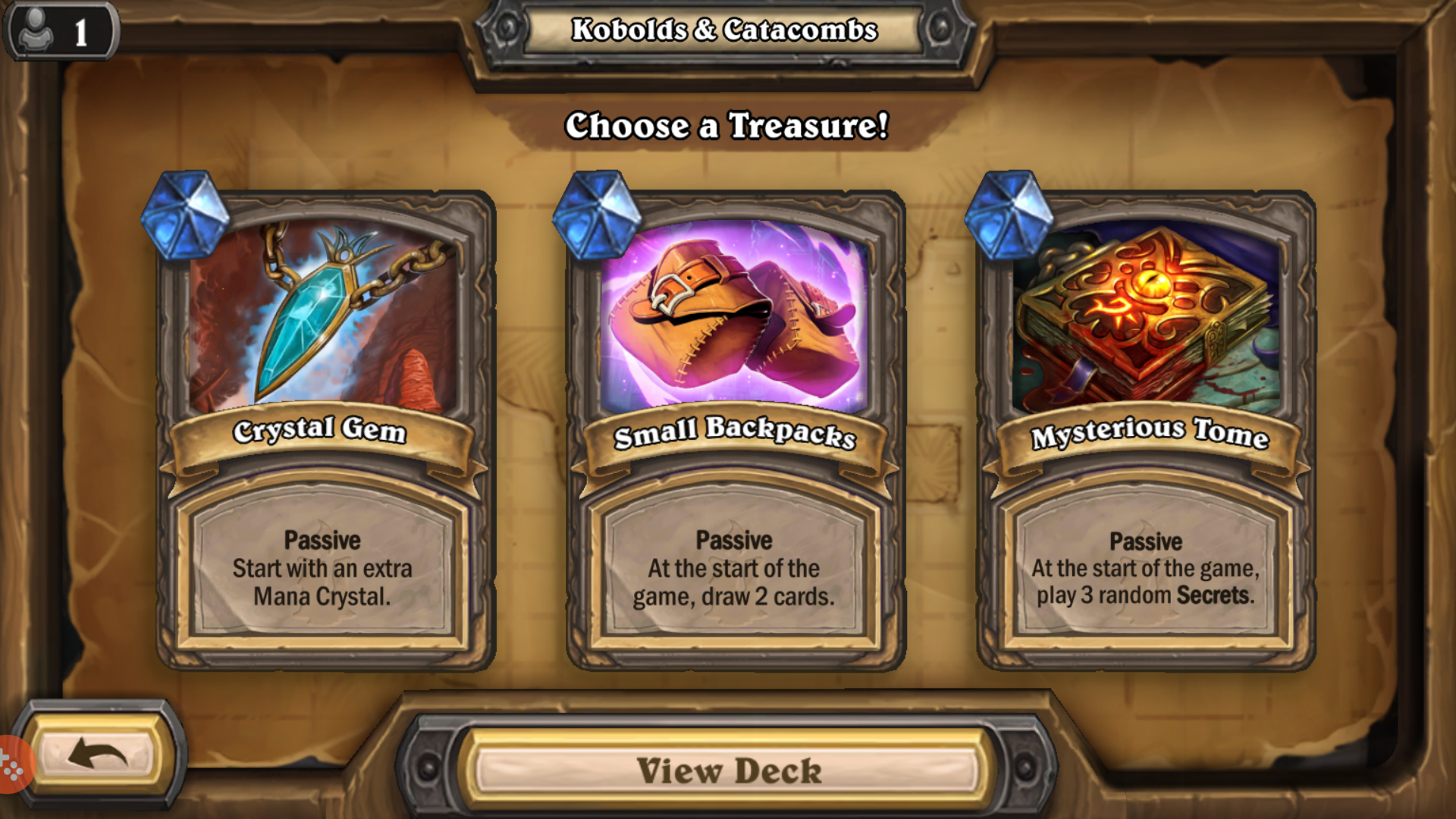 First, some of the powers on offer are applicable in any situation. The two best to watch out for are the Captured Flag and the Justicar's Ring. The former gives all your minions +1/+1 forever, and the latter boosts your hero power while reducing its cost to one.

Both are massive, because there is no game situation where they're not immediately and extremely useful. Captured Flag is normally the better choice but Shaman and Warrior decks especially may find the ring just as handy.

If you're not lucky enough to get one of these options, the next thing to consider with any kind of general buff is how often you can benefit from it. Take, for example, the three passive treasures that adjust mana.

Glyph of Warding makes enemy minions cost 1 more. Crystal Gem starts you off with an extra mana crystal. Finally, the Scrying Orb makes your cards cost one less. These three are probably the best picks after the Ring and the Flag, but which of them is better?

The answer is the Scrying Orb because, unless your hand is empty, it will provide a constant and powerful benefit. The next most useful is the Glyph of Warding because it's a perpetual millstone around your opponent's neck. Many bosses, though, have big hero powers to beat you with instead, so it plays second fiddle to the Orb.

The Crystal Gem, while still a very good treasure, is last because after nine turns, it's no longer helpful. It has a limited shelf-life compared to the other two.

Most of the other general passive buffs are less useful as they’re far more short term. The Cloak of Invisibility does need careful consideration, though. At first glance it looks super powerful: permanent Stealth means your minions will never, ever get attacked. And it can be, with the right cards.

However, it also means you can never benefit from Taunt and that your face will take massive damage. It looks like a general buff but is in fact quite specialised, only worth taking if your deck can make the most of it. 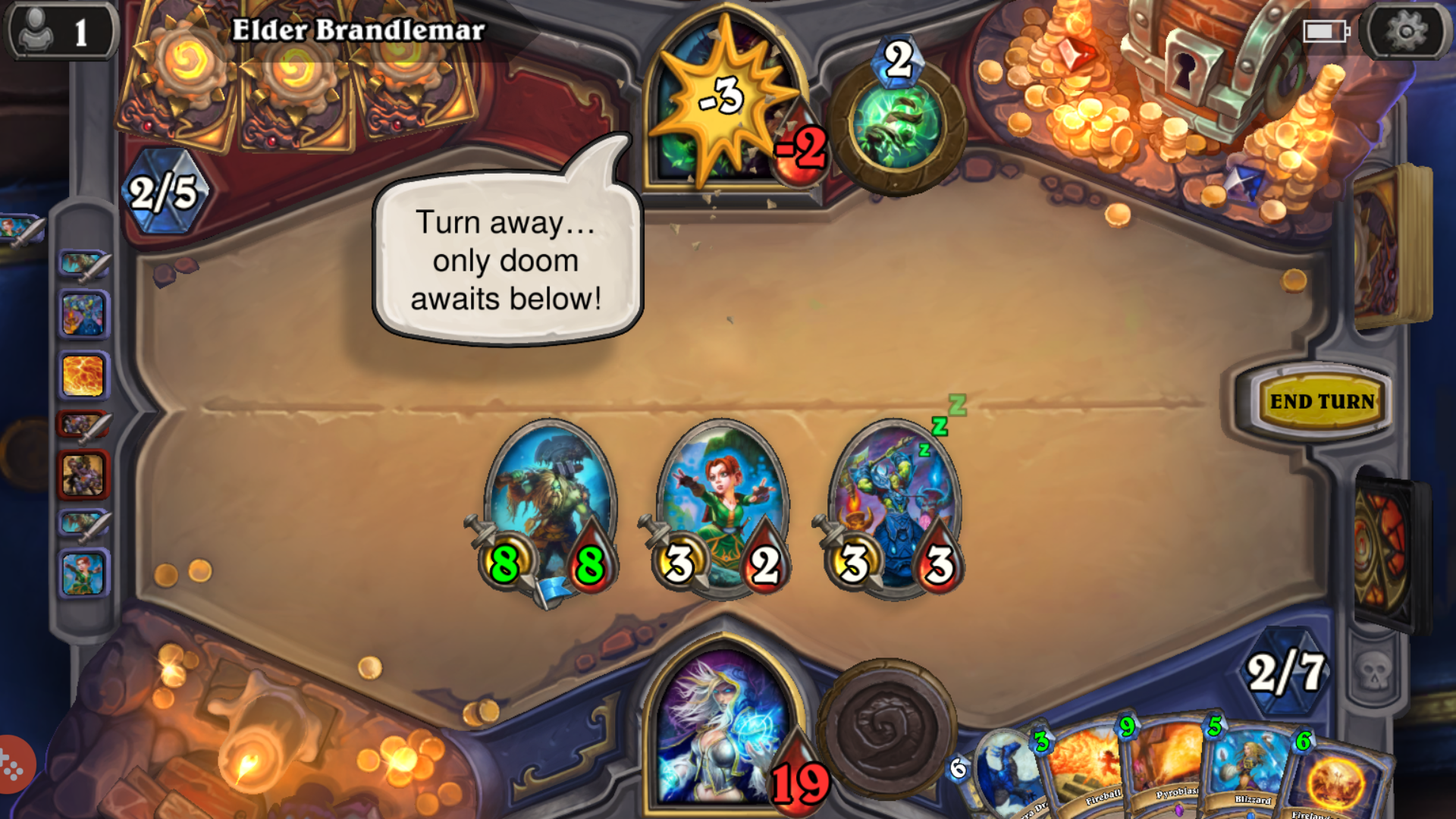 A lot of the other passive powers are also situational and specialist. The Battle Totem, for example, makes Battlecries trigger twice. This can be huge, if your deck is full of Battlecry cards. You'll get offered several treasures during your run and picking up a situational buff like this later on can be a great choice. The trouble is that at your first choice, you don't know how your deck will come together.

So, taking one of these specialist buffs as an early pick is a bad move. You might be able to make the most of it with your card choices. But even if you do, trying to do so might lead you into sub-optimal card picks to try and fit in with your buff.

The only one worth considering as a starting pick is the Scepter of Summoning. This caps minion cost at 5, and since big minions are a good idea in the Dungeon, it's almost certain to see some use.

As well as passive treasures, you'll also get offered a number of active ones. Instead of a permanent boost from the beginning, these take the form of super powerful cards that get added to your deck. And when we we say "super powerful", we mean it: some of these cards are nuts.

Take Wish, for example. It costs 10 mana, but it fully heals your hero and fills your entire board with random legendary minions. Playing it as a late-game card will win you the match in almost any situation. It is, as the name suggests, probably the most powerful of all the available card treasures.

Adventurers must beware, though, because some of these cards are far less powerful and can, in fact, be positively problematic. Another 10-cost card is the Rod of Roasting, which randomly pummels heroes until one of them is dead, ending the match. The trouble is that unless your health total is vastly higher than that of the opponent, it could well be you instead of them. Avoid. 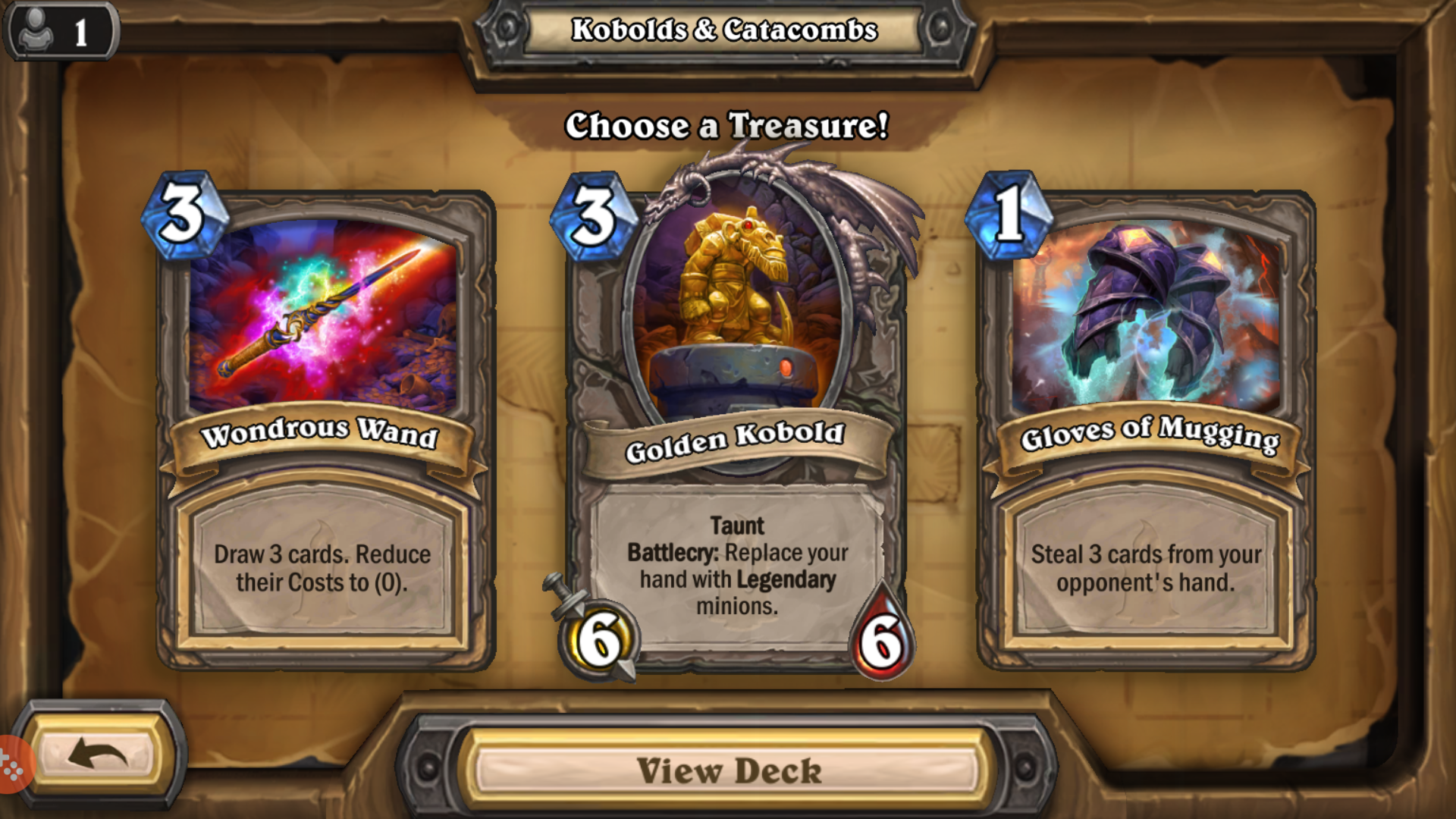 There are other cards which are obviously problematic, like the Aleatoric Cube. There are a lot more which are very helpful like Wax Rager and Wand of Disintegration. For the remainder, we need to apply a similar thought process to that used for passive bonuses.

Take the Horn of Cenarius, for example. This immediately summons three minions from your deck, providing a huge tempo swing. However, it's most helpful if those minions are big, expensive ones. If the summon causes them to miss out on good Battlecry effects, it's a sad loss.

And the horn is far less helpful if there are less than three minions left in the deck. So, although powerful, it's a little more situational than it first appears. A less situational card is a better pick, if there's one on offer.

Beyond that, you need to think ahead to see that some of those situation specific cards can actually hurt you. The poster children for this issue are cards like Boots of Haste and Bag of Coins. Both will let you develop your board very quickly, but you'll empty your hand at the same time.

Should the boss you're battling have a board clear effect, you'll be stuck without minions or cards to replace them and staring at a near-certain loss.

We're going to end on a minor spoiler for the run. So if you don't want to know about the fabled sword of Quel'Delar that's mentioned in the Dungeon loading screen, stop reading now.

Quel'Delar sounds very mysterious, but it is in fact a super rare treasure option. It comes in two parts, the Blade and the Hilt. The former is a solid weapon and the latter is a spell that buffs a minion. They're weaker choices than the vast majority of treasures, though. So why pick one?

Because, although it's a big risk, if you're lucky enough to get both Blade and Hilt in a single run, they combine into the most powerful card in the game. The finished sword is a 6/6 weapon that deals 6 damage to all enemies on the board each time it's used.

You may well never see it, but the chance is so tempting it's almost impossible to resist the lure of blade or hilt should either come up.

Can you spot government manipulation and censorship? Resist the system in Blackbar

Hearthstone's Ranked Play system is getting a tweak, but it's for a good reason