Skyfront is a fascinating VR FPS.

There are plenty of solutions out there for locomotion in VR. Physics based movement systems, on rails experiences and even traditional controller inputs have all been well tried and tested but getting the perfect amount of freedom of movement in a 3D VR space is still difficult. 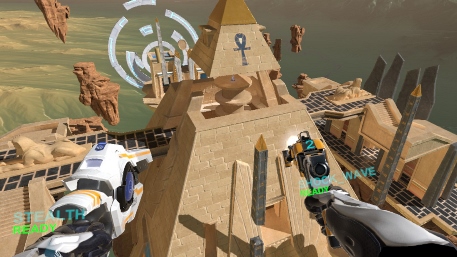 Skyfront's solution to this problem is guns. Guns are often heavily involved in many types of games and genres, so it's only natural it would be the movement solution, too. In Skyfront you simply aim your "weapon", fire, and your character will slowly but surely move in 3D space, in any direction.

It feels liberating to be able to move in any direction, and in this floaty first person shooter, it's important. Players can fly quickly around levels, ducking behind floating pieces of. Cover, or flying above all of the stage while watching other players move around, taking pop shots at them as they fly by.

Yes, that means you will actually be shooting other players, not simply flying about. You can keep your gun for locomotion in one hand, while using the other to shoot at enemies with rounds of bullet fire or homing missiles. This is still an online FPS after all, so it’s no surprise that it'll be familiar.

The Santorini-inspired design of the stage I played looked great and even just flying around shooting pots felt like an immersive and interesting experience. Then there's the enemies, which as moving targets are that much more interesting to fight. Of course, you should also keep moving yourself. It's difficult at first, but a fascinating experience we can't wait to see more from.

Harry Potter: Hogwarts Mystery just soft-launched on Android but we still don't know how to feel about it