These are the ships you'll want to sail in World of Warships Blitz.

So you’re starting up World of Warships Blitz and you want to know which warships are going to carry you to victory? You’re a wise one looking this up, and after reading you’re only going to become more enlightened thanks to some light reading about the high seas.

We’ve taken the survivability, maneuverability, guns and concealment stats, and put together a list of what we think the best ships are to earn in each stat, with a few high-tier rewards that’ll keep players sailing for a while, and a few lower-tier ones you’ll earn a bit more easily.

Take a look below and you’ll soon know which upgrade path you’ll want to take in World of Warships Blitz! 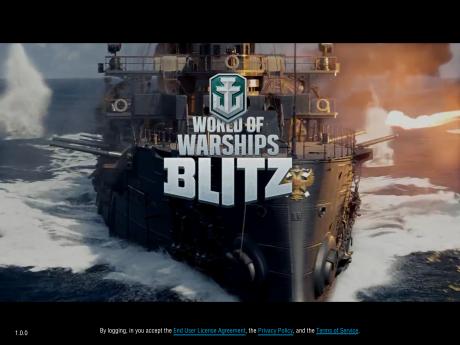 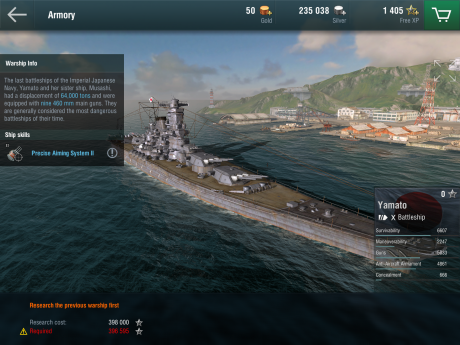 The Yamato is Tier X Japanese Battleship, and it’s nothing be to be sniffed at. It has the very best base survivability in the game, and it’s gun are incredibly powerful, too.

Not only that, but it’s ship skill Precise Aiming System II increases main gun accuracy by 35% for 20 seconds, making it deadly even in long-range encounters.

To acquire the Yamato, you’ll need to get tier 1 Hashidate, tier 2 Chikuma, tier 3 Kawachi, tier 4 Ichizuchi, and then follow the upgrade path from there. It’s a long way to go, but it’ll increase your odds of winning. 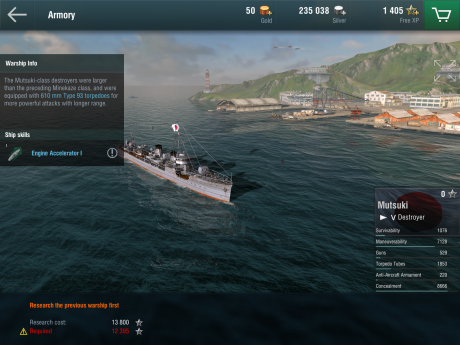 Yep, it’s one heck of a nimble ship. The Mutsuki has maneuverability that is only beaten by a premium ship in its base form, and with a couple of upgrades will outpace even that.

Not only that, but with a concealment level of 8666, it’s one of the hardest ships to hit in the game. Not bad at all. Add to that the ship skill Engine Accelerator I which increases max speed by 10%, and it’s a scary vehicle.

It’s only a tier 5 ship too, meaning it won’t be too hard to earn. Get the tier 1 Hashidate, tier 2 Umikaze, and then follow the upgrade path to tier 5 to get it. 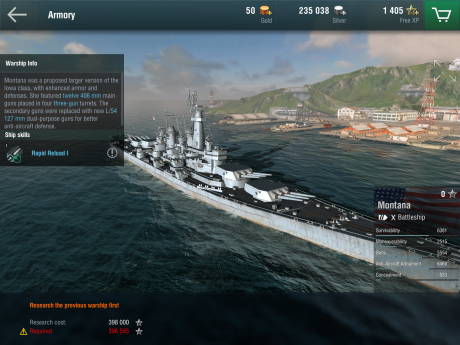 Huge guns, great survivability, anti-aircraft capabilities, what more could you want? Well, you’re not going to be able to conceal a beast of this size…

The Montana will blast away opponents unless they have massive survivability, and the Rapid Reload I skill can increase reload speed by 15%, allowing it to shoot barrage after barrage.

Getting to the Montana will be tough, you’ll need to earn the tier 1 Erie, tier 2 Chester, tier 3 South Carolina, tier 4 Wyoming, and then follow that upgrade path to the end. A weighty task, but it has a big reward at the end. 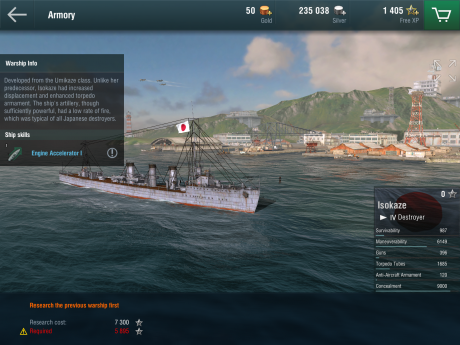 So it’s not quite the best concealment in the game, but it’s stats are more well rounded than some others, and it’s quite easy to get to for new players, making it an attractive proposition.

The Isokaze has excellent concealment, putting it into one of the very best in the game, and great maneuverability too, making it a nimble ship indeed. The Engine Accelerator I skill will help speed past opponents. Guns and survivability are low though, making it an awkward choice to stick with long term. Still, as a stop-gap, it’s a good choice.

To get the Isokaze, earn the Hashidate in tier 1, Umikaze in tier 2, and follow the upgrade path from there. It’s well worth it!