It's fair to say that there's a mixed bag of strategy titles on the App Store. Some of them are great, but some of them forget that one of the best parts of strategy gaming is figuring things out for yourself.

When you start playing Hero Academy 2 you might think that it falls into that latter category, but once the training wheels come off you'll realise you were mistaken. Horribly, wonderfully mistaken.

This is the sort of game that blossoms into something brilliant the more time you put into it. It's all about building your team, figuring out the best tactics, and raining death and vengeance down on your opponent.

The game takes a good chunk of its ideas from the likes of Clash Royale. Rather than playing out in real time though, here the action is turn-based.

Each turn you lay down some card-based units, move around the tight board, and try and smash some enemies into dust. The main aim of the game though is to destroy your opponent's crystals.

The fights play out with a decent rhythm. As well as your character cards you've got spells and equipment that you can throw into the mix. Everything costs mana though, and you've got a limited pool of that. 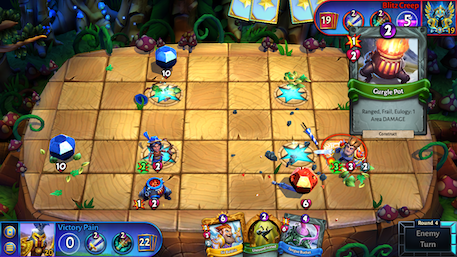 After you've bashed through 12 turns of the game, you enter sudden death. Here you get powers you can hurl at the crystals, which also give you extra mana to spend on the final onslaught. It keeps things moving, and can change the shape of the game in pretty dramatic ways.

But it's not just about the online duels. There are single player modes here as well that let you practice tactics and figure out how to take down tough opponents.

In other words, there's always something to do. The game is free to play, but it's kind with it. There are no pay walls here. You're just playing, learning, and trying to become the best hero you can.

I'm holding out for a hero

There's so much to like in Hero Academy 2 that it's hard to get it all down in one review. From the brilliant art style to the various layers of tactical ideas, everything here is polished to the sort of sheen we expect from the very best games on the App Store.

If you're looking for a fight, and you want to make sure that you're using your brain as well as your brawn, then this is the perfect game for you.

Night in the Woods is an emotive adventure about friendship, family, and deadly mysteries