After much anticipation, Team Meat's tough-as-nails platformer has finally hit the Switch. And everything seems to be as expected. Which is good, because we expected it to be good.

Players assume the role of a small red blob called Meat Boy, who must save his girlfriend, who's made of bandages, from the game's antagonist, Dr. Fetus.

The fundamentals of the game are still the same as they were on every other platform. You have to run, jump, and slosh your way through over 300 insane platforming levels, all with subtle nods towards classic franchises like Castlevania, Metroid and Street Fighter.

A fistful of flesh

Super Meat Boy just feels right as a handheld title. In fact, I would argue that the Switch is the platform that this game was made for. The controls feel as tight as ever, and 95% of the mistakes I made were my fault for being terrible, rather than issues with the game.

It does feel like an odd design choice to map the run and jump button to Y + B respectively, but the more I played, the more natural it felt. That said, the ability to remap the controls to match GBA Mario wouldn't have gone amiss.

The game looks as lovely as ever, but Super Meat Boy's graphical ambition was never astronomical. Its charm remains in its simplicity, and the portable nature of the Switch only compliments that.

One thing that holds the game back a tad is the sound design. While this is a great port of Team Meat's classic hardcore platformer, the absence of the game's original banging soundtrack is jarring. 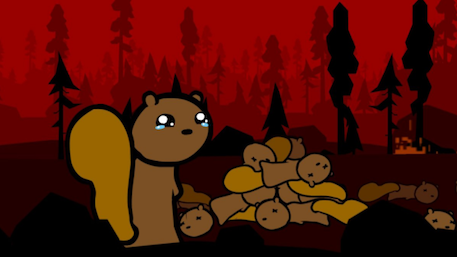 Sure, it can't be helped thanks to to copyright issues, but the new tunes just don't compare to those that accompanied the original 2010 version.

Super Meat Boy's Switch port introduces a race mode, where two players can go head-to-head in a split screen race through a number of levels. You can choose to do a particular chapter in order, or you can play through a series of randomly generated levels to spice things up a bit.

I had great fun craning over the Switch's 6.2 inch screen, yelling obscenities whilst being absolutely annihilated at the race mode. It's a fresh burst of brilliance that Super Meat Boy players have craved for a long time. 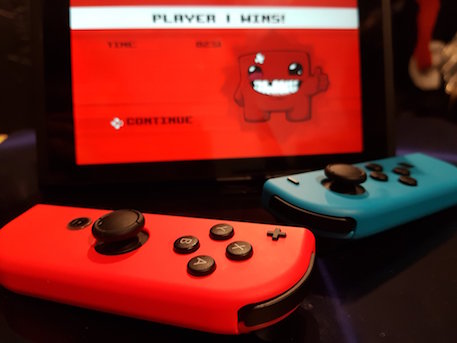 At $14.99, Super Meat Boy is a reasonable price for the heft and replayability that it offers, but that price may come in to play for those who have bought it on five other platforms already.

While the game may feel a little stagnant to old fans, the race mode is certainly a reason to pick it up again, and Team Meat has rewarded your commitment with some subtle changes elsewhere too.

Super Meat Boy is like an eldest child. While times have moved on and you don't think about him as much as you did, you still love him and embrace him every time he turns up on your doorstep asking for money.

And while it is still the same game, I've never felt this satisfied in all of my years of handling meat. Getting to do it with a friend only makes the whole experience richer.