Getting Over It review - Frustratingly hard yet weirdly compelling

Remember QWOP? Remember those tentative first steps (or rather those poorly coordinated leg spasms that were meant to be steps)?

How you kept trying and trying, inching, bouncing, dragging, tumbling your way forward, until you found a rhythm that worked and grasped the physics and timing needed to actually step consistently?

That spirit of QWOP lives on Bennett Foddy's newest game Getting Over It^he sprinter and track may be gone, replaced with cauldron and hammer, but the essence of gameplay lingers. Just be prepared to fail. A lot.

A man and his hammer

I'll be honest. I haven't finished Getting Over It yet. Much like QWOP, I imagine every normal human will reach a point that just seems impossible.

Be it due to not yet having mastered the timing or precision needed, or due to a frustrating loss of progress due to a poorly-planned move, success in Getting Over It can seem like a thing of legend.

And yet, I'm still compelled to keep playing, because behind the weird premise and challenge, Getting Over It is just a lot of fun. 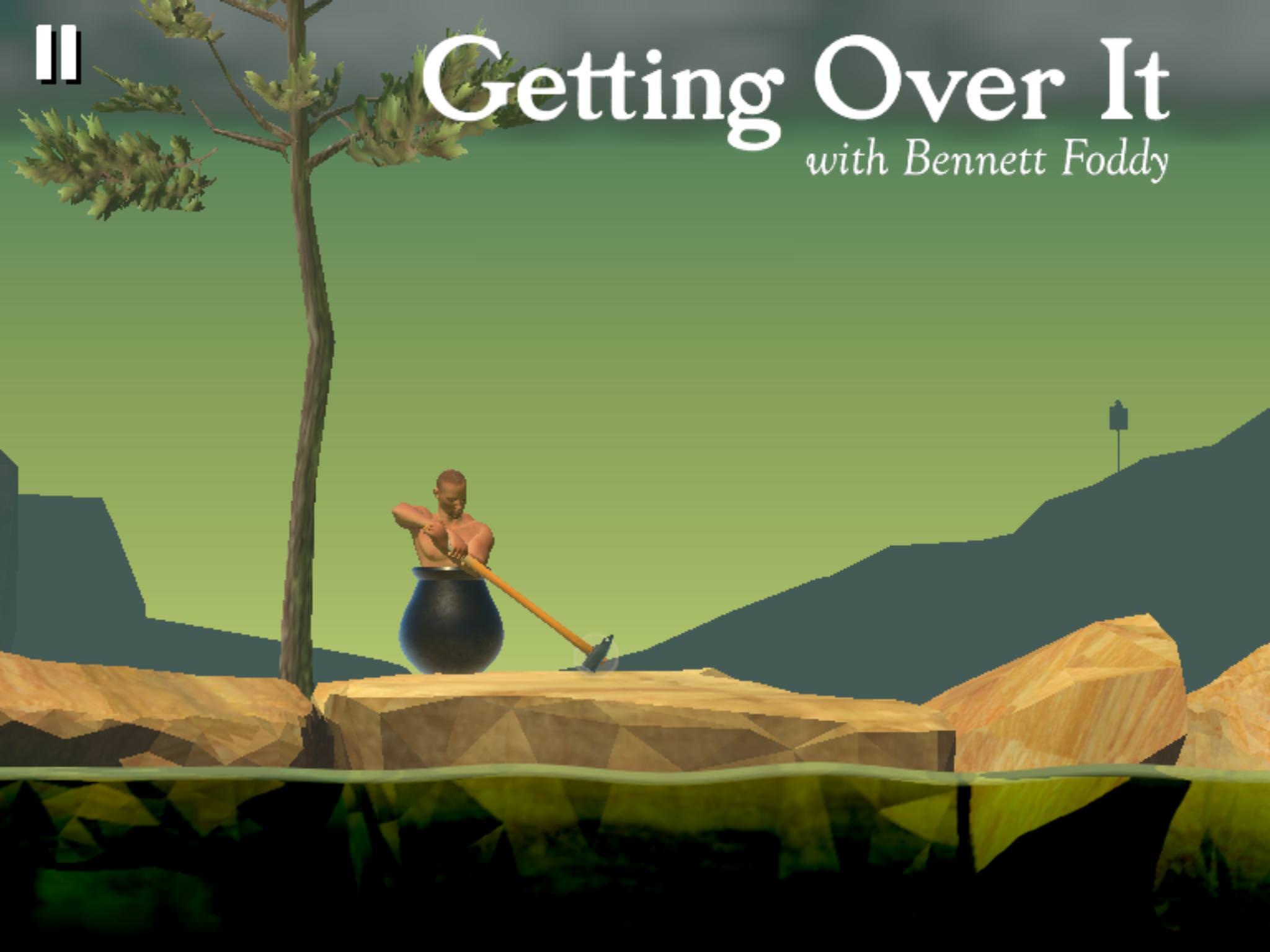 That premise is simple: you're a man, stuck in a cauldron, who moves by manipulating a sledgehammer. You'd never imagine a sledgehammer could be so versatile until you've played Getting Over It.

Through careful swipes and drags, you can drag and hook, and propel yourself upward with an explosive downward push.

There's a moveset to learn in Getting Over It, and like QWOP, you're the one designing that moveset through trial, error, and experimentation.

You start flailing your sledgehammer around, making progress through wild movements and swings, moving forward more through luck rather than precision.

But soon the mountain and the abstract structures you need to climb begin demanding more from you. Overhangs that need to be hooked and swung around, angled slopes that require a low angled hop.

Narrow passages that call for maintaining tension against the walls to keep from sliding back down. Rails to shimmy across, tiny platforms, towering climbs.

Slowly but surely, you improve. What once seemed impossible becomes surmountable. Certain movements and tricks become familiar and practiced.

Your actions become more careful and precise. The experimentation and gradual mastery over time is what imbues Getting Over It with its fun. 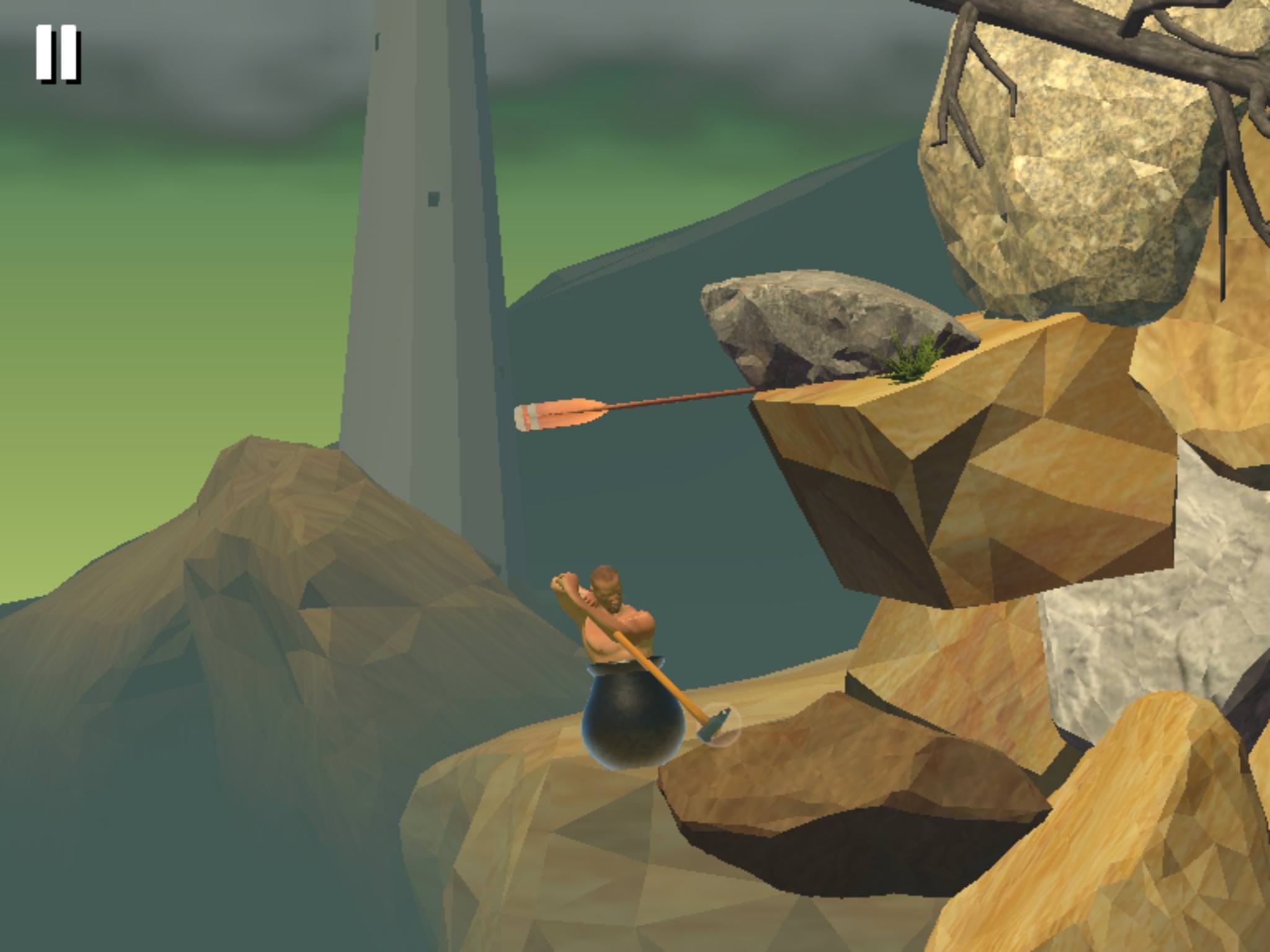 A single failure could send you tumbling back to the start of the game. Getting Over It has no checkpoints and no saving. It's as much a statement on challenge and frustration as it is well-designed and clever.

Getting Over It is a weird game in both aesthetic and concept. It's a frustrating experiment whether you're a fan of intentionally punishing games or you avoid such games like the plague.

But despite those frustrations and the ease of failure, Getting Over It's unique gameplay and rewarding sense of progress may win you over. I haven't finished Getting Over It yet, but I will. One day.

Frustration is common in Getting Over It, yet its sense of progression and improvement can be quite addictive
By Christian Valentin
| Dec 18, 2017 |
iOS
Find out more about Getting Over It
SEE COMMENTS

App Army Assemble: Getting Over It - Unnecessarily frustrating or strangely endearing?