There's a lot to be said for simple, highscore-chasing mobile games. They're often the ones you come back to time and time again, trying to get a little higher up the leaderboard or beat one of your friends.

Timber West definitely fits into that category. But it's not quite perfect, dallying more with frustration than it does with fun sometimes. It's good, but it's not the best time sink you're ever going to find.

The game is a shooter set in the old west. You're a cowboy, or girl, and you need to shoot bandits before they shoot you.

Push down on the screen and you'll raise your gun, which will send a crosshair rising up the screen. Release when it's over a bad 'un to fire.

The game is split into little levels, each of which have a set number of varmints to kill. Knock them all out and you'll move to the next stage. But your reticle moves quicker, and there are sneakier enemies to take down. 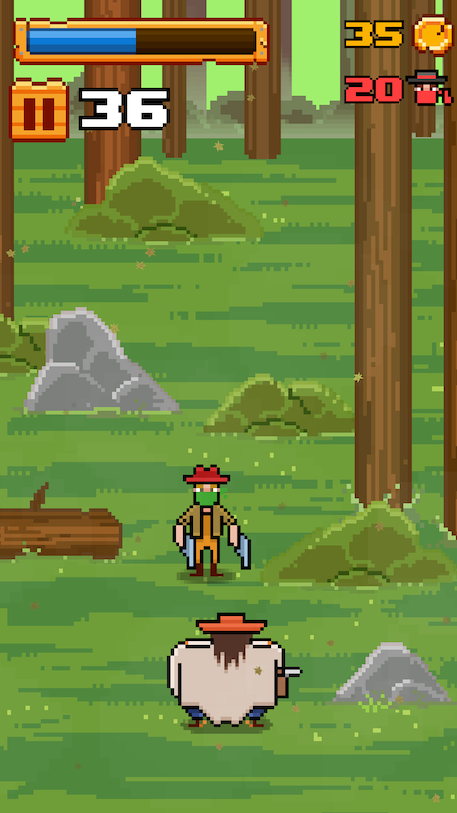 It's a pretty slick experience, although it can get pretty annoying when you keep missing a shot by a few pixels. The coins you earn from play can be spent on new gunslingers.

Not only do the new characters bring new weapons into the mix, with bigger crosshairs or multiple barrels, they also let you start the experience deeper in, skipping out the annoyingly simple first levels.

And that's about all there is to it. Chase your highscore, get some new cowpeople, rinse and repeat. It's fun, but it's not as fun as other games of the same ilk.

At the end of the day, Timber West is a fun distraction, but it's not the sort of game that's really going to get its bear claws into you.

There's fun to be had here, for sure, but in the end it's going to leave you feeling a little bit cold more often than warming the cockles of your gaming heart.

A decent enough wild west shooter, but there's not much here after the initial thrill
By Harry Slater
| Dec 8, 2017 |
iOS
Find out more about Timber West
SEE COMMENTS