3 reasons Reigns: Her Majesty is one of our most anticipated games of the year

Long may she reign

Reigns: Her Majesty is coming out on iOS, Android and Steam this week, and we're really rather excited about it.

Why's that, you ask? Allow us to explain.

The first Reigns was awesome

Though it's not called Reigns 2, Reigns: Her Majesty is a full-on sequel to - you guessed it - Reigns. Which turned out to be one of our favourite games of 2016.

You can read why that was so in our review.

Here was a quirky choose-your-own-adventure game that had you plotting your way through successive kingships using the control system from Tinder. It was as frivolous and yet simultaneously nuanced as that mish mash of elements would suggest. 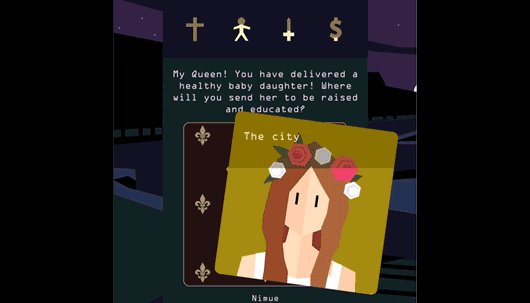 The writing was spot on, with just the right combination of silliness and black humour. From devil dogs to revolting peasants and scheming priests, it was essentially one big balancing act between four key factions.

Should one of those element gain too much power - or fall too low - then your reign would come to an end. Probably violently.

It's offering a different perspective

The headline twist with Reigns: Her Majesty is right there in the headline. This time you're playing the role of the queen rather than the king.

Switching to a female perspective would seem like a positive (if minor) move at the end of a tumultuous year for gender equality - and that's putting it mildly. But we're particularly excited to see what the writers of Reigns will do with the switch. 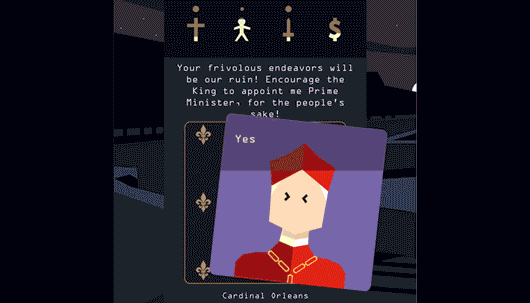 As we've already mentioned, the writing in the first game was much sharper and cleverer than most other games. Through all the zaniness and humour, Reigns managed to paint a vivid picture of the impossibility of power.

Hopefully the sequel will be able to say something interesting about women in power, both at the time of its Renaissance setting and today.

As we've just mentioned, Reigns: Her Majesty also brings things forward to Renaissance times. That in itself opens up a whole world of narrative possibilities.

With a new era of knowledge and enlightenment to draw from, we're hoping from an even more nuanced tale. 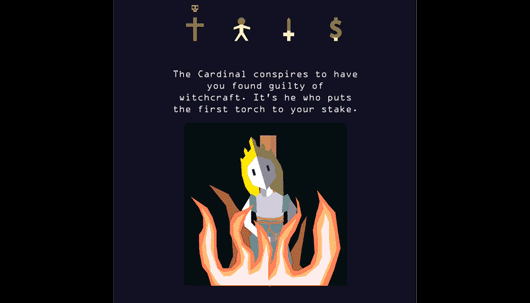 Publisher Devolver Digital is also promising a new inventory system, for which you must find and upgrade five special items. You can then use these powerful items on character cards in order to unlock special paths through the constantly evolving story.

Basically, while Reigns: Her Majesty seems to have an even more interesting plot, it also sounds like it's more gamey than the first one. This is a good thing, and could broaden the game's appeal further.

Want more? Check out our growing collection of Reigns: Her Majesty articles!