Meet the best Clash Royale player in the world

Think you're good at Clash Royale? A 16-year-old from Mexico scooped $150,000 in front of a London crowd [UPDATED]

The Clash Royale World Championship Finals demonstrated that mobile eSports is coming of age, with a phenomenal showcase. In the game's first-ever global eSports competition, more than 27 million players from around the world entered the qualifying in-game challenge, making the Crown Championship the biggest mobile esports competition ever. Then the lavish set transported the audience of 1,000+ fans, streamers and press into the game world with huge screens displaying the action, massive character installations, and a general production level that would put The X-Factor to shame.

The final embodied the old sporting adage, 'if you're old enough, you're good enough' as two 16-year-old players, both relatively fresh to the circuit, played out a thrilling finale for the largest prize in mobile eSports gaming to date. 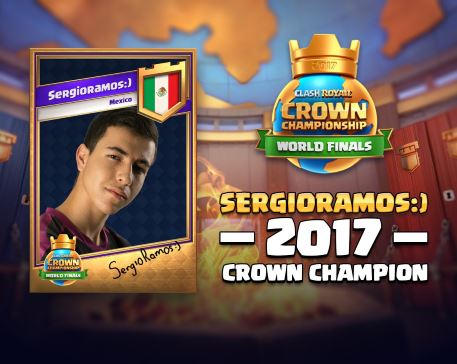 SergioRamos:), the youngest player in the competition, battled through four rounds against some of the world’s best players from Asia, Europe and the US, eventually winning the final three games to one against the second youngest player, US-based MusicMaster. You can read our blow-by-blow account of the afternoon's action here. All-in-all 16 pro players had qualified for the finals (representing nine countries), from an initial pool of 28 million Clash Royale players who tried their luck via an in-game challenge and then the regional qualifying events.

Speaking to a crowd of reporters later through an interpreter, a clearly emotional Sergioramos:) thanked his family, friends and clan-mates for their support.

"When I first started playing Clash Royale, I was just doing it for fun, and I never could have imagined making it to this level," said sergioramos:) later. "There were so many other amazing competitors at the World Finals, and it was an honour to have played with them this weekend."

He also claimed it showed Mexico was home to the best players (citing an earlier win of a fan-organised global trophy by a fellow Mexican player earlier in the year). But said he had no idea yet what he would be doing with so much money!