We spoke to Netmarble to learn more about the making of their MMORPG Lineage 2: Revolution

Discover the lineage behind Lineage

There aren’t too many mobile MMOs that can competently offer players a console-quality experience on the go, but released just last week for iOS and Android, Lineage 2: Revolution is looking to change that. Having already exploded in South Korean shores late last year, the revolution has headed West with competitive battles, in-depth real-time gameplay, and epic raids.

To discover more about what MMORPG newcomers and veterans can look forward to in Lineage 2: Revolution’s timely release, we took the time to catch up with the folks behind the game. Talking all things guilds, gear, and quest-related, here’s what Netmarble had to say.

After so many years of the franchise being exclusively for PC, what gave you the confidence that Lineage 2: Revolution would succeed as a mobile/iOS game?

"There are a lot of MMORPG games, but what gave us confidence as far as Lineage 2 doing well on mobile, was that Lineage 2 has the [Clans] feature. It is similar to the “Guild” feature found in many other games, but for Lineage 2: Revolution, Clans are the foundation of gameplay for its players and plays a crucial part in the thrill of the game. Through Clans, groups of different people come together to form a community, and in this community this virtual world exists. Therein lies its beauty.

"We believe that it has found success in the mobile sphere because the basis of Lineage 2’s social community is around Clans. Mobile phones can be accessed anytime, anywhere which is why we believe it is important to create a game based around community, and this is the reason why the fun of this game becomes compounded." 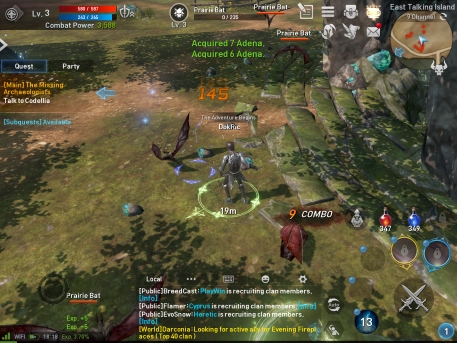 What is the most difficult part about developing this game for mobile? Have you changed a lot of things from the PC version?

"One thing we had to worry about when we ported this game to mobile was figuring out how to bring out the emotion of the PC game and still keep it mobile friendly. We had to keep the controls and the UI simple enough so that it would be easily accessible on a mobile device. We focused on making this game intuitive and simple, for instance by changing the original movement by mouse to using a virtual direction pad, by removing complicated UI, and by highlighting important things in red.

"Other than that, we also made it a point to bring PC quality graphics and gameplay to a mobile device as we felt that this was critical to the success of a mobile MMORPG." 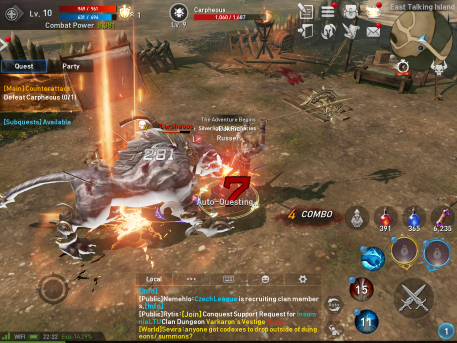 What aspects of the game do you feel will excite hardcore MMO fans the most, and do you think the game will appeal beyond this core fanbase to casual gamers as well?

"One of the biggest strong points of Lineage 2: Revolution is that it provides some of the most amazing graphics on a mobile device.

"We believe that even casual players may find this appealing. Casual players who may have been lured in because of the graphics will find that the various quests and UI/UX layouts will also make it intuitive for them to quickly adjust to the game. Overall, the game was developed so that anybody who has some experience playing an RPG on PC or console will be able to easily adjust to playing this game.

"Of course, we haven’t forgotten about the hardcore MMO users. For them, there is plenty of content, such as Fortress Sieges or Castle Sieges between clans to see which clan is among the best in each server. Other than that, players will be able to create unique characters by collecting various equipment, upgrading their stats, and learning multiple varying skills. They will be able to enter special dungeons and fight in PvP battles. Hardcore MMO fans will find plenty of things to do."

How does IAP work within Lineage 2? For example, what content/items are useable via IAP?

"Overall, the game is free, and can be played with currency found in-game (Red Diamonds). No areas, characters, or equipment is locked. Currency collected through gameplay (Red Diamonds) can be used to purchase character equipment, Soul Crystals, and other various items.

"What IAP provides, is the ability to acquire currency more quickly, and allows players to purchase specific items from the Trading Post. Players can easily play without having to pay, but can pay to get more currency faster.

"Currency will more often be spent to purchase equipment or to upgrade your characters."

GNOG review - A delightful puzzler that's anything but robotic