If you're a vehicular madman, Gear.Club Unlimited for the Switch might get you excited in all sorts of ways.

Mix classic racing with an intensely detailed upgrades and customisation system, and you've got a pretty decent game for the petrol-heads.

For the common folk, though? Well that's a bit of a harder sell.

Jump in my car

If you've played Gear.Club on iOS or Android, you probably have a decent idea what this is all about. 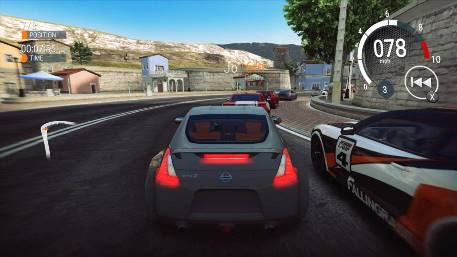 In its single player campaign, you race against opponents, increase your levels, unlock pieces of your workshop, and unlock different customisations for your kit.

These bits and pieces help get your car from being mediocre to totally killer, letting you boost speed, handling, grip, and more.

The racing is fluid, giving you more control over your play style by adding the option to turn on assisted modes, manual gears, and racing lines. Rewards are larger the harder you make it for yourself, so it pays to take the difficult road.

These campaign races are over in little more than a minute, offering up an experience that's quick and addictive at first, especially when grinding to get more points to level up your car.

If you're trying to beat your own record, or just beat out the competition, you can take advantage of the rewind feature which lets you correct any mistake you've made that spoils your run.

The graphics are decent enough for the platform, but like Rocket League it's taken a bit of a hit for the sake of performance. Or, at least it feels that way. In single player it's not so apparent, but it's the most noticeable in multiplayer.

I wanna take you home

Unfortunately, whatever way you look at the game it's hard to understand what makes it worth the $45 asking price, especially considering it started out life as a free to play mobile game.

Its mobile backbone is pretty clear when harvesting rewards for completing missions and getting achievements. Truthfully, it feels a little naff.

In local multiplayer mode things get a little wooden. It feels hashed together as you get to choose from a list of pre-selected cars and head straight into the race against your friend and a bunch of AI racers if you want the challenge.

It's also odd that there's no music in the selection or loading screen, and the audio often cuts out on one of the players' sides.

The campaign mode itself is also a little uninspiring and not unlike something we've seen before in the likes of CSR Racing.

Choose your car, work your way up the huge career chain by beating out the competition, dominate championships, and become the 'bestest racer to ever live', or something like that.

It's too far to walk on your own

Gear.Club Unlimited is a casual experience that will no doubt be enjoyable to those who have an interest in getting more hands-on with their car's design.

Though it looks promising, the reality of it is that there are parts of the game that feel a little rushed, especially when you delve into local multiplayer mode.

Given the asking price, there are better racers on the Switch for you to spend your money on.

Gear.Club Unlimited is a good racing game, but it seems to lack that sweet, satin finish on the Switch that's so apparent on mobile
By Emily Sowden
| Nov 30, 2017 |
Switch
Find out more about Gear.Club Unlimited
SEE COMMENTS

Gear.Club Unlimited's latest Switch trailer will get the petrol-heads excited