You will be mine

It's been a little quiet on Pokemon GO's end for a little while, but it turns out Niantic were cooking up a big event for us to enjoy: the Global Catch Challenge.

So? Why should you care?

It's Pokemon GO's biggest ask to date as Niantic's set the task for trainers to catch 3 billion Pokemon in seven days in order to get the very best rewards.

YouTubers IHasCupquake, Coisa de Nerd, and Rachel Quirico have travelled to Japan to host the challenge, which'll conclude on November 26th at the Pokemon GO Safari Zone event in Tottori, Japan.
Though there are smaller prizes to be gained while you work through the milestones (see below), the main prize is to make the Japan-exclusive Farfetch'd available worldwide, and to bring Kangaskhan to East Africa. 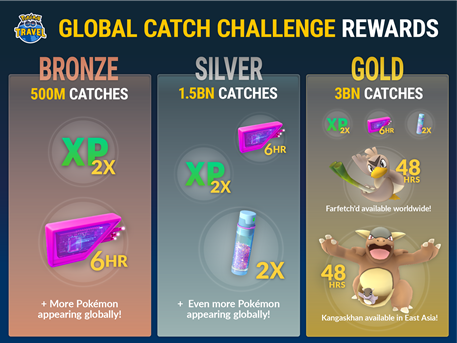