It's full to the brim with crass, offensive humour designed to appeal to one specific audience. And it's all wrapped up in a fairly straightforward card-based game.

Even if you are a huge fan of the series, you'll have to stick through some pretty basic gameplay to get to the meat of the story and humour.

South Park: Phone Destroyer sees you as the New Kid on the block, who is drafted in to play with all the other South Park characters.

You kick things off with a surprisingly in-depth character creation system, before being given a small deck of cards and starting your very first battle.

It plays a lot like Clash Royale – you drag cards onto the battlefield, and they automatically move forward and attack their closest enemy.

The main difference is that there's no lanes to play around in, with all the action muddling together in the centre as ten different characters throw themselves into the fray.

There's no real strategy to it all, beyond whether you choose to flood the field with weak, cheap units, or wait a few extra seconds for better cards to be available.

You can't influence character movement on the field either – no matter where you place them, they'll just take the shortest route to the nearest enemy.

It turns every battle into a confusing mess of bodies, and only supports an overwhelming force approach if you have any intention of winning.

Beyond that, it's all familiar ground. You unlock card packs, sort out your hand, enter battles, rinse and repeat.

There's an extensive single-player campaign to work through, with levels that increase in difficulty as you replay them, and the usual PvP mode if you want to battle online. 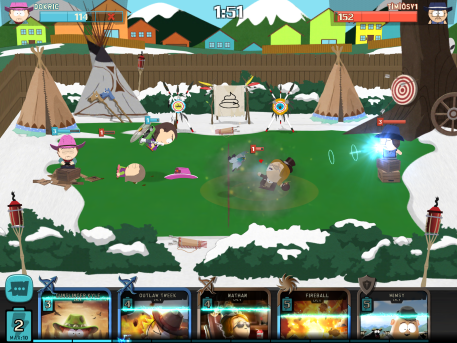 But there's also the Great Paywall of China – a dumb joke that restricts you from progressing further in the campaign until you complete certain objectives.

It's a clear jibe at free to play mobile games, but when it's doing the exact thing it's poking fun at, it feels like less of a joke and more of an annoyance.

And really, the humour is what most people will be here for. If you're a fan of the show's unique brand of offensive scatological jokes, then you'll be well-catered for. Otherwise, don't expect any laughs.

Overall, this ticks all the boxes you'd expect from a game that bears the South Park name.

But that's really all it does. It makes some crass jokes, pokes fun at mobile games, and presents it all up in a fairly underwhelming package.

Fans of the series will likely get a kick out of the jokes and characters, but it's ultimately just not a lot of fun for anyone else.

Fans of the show will enjoy the characters and humour, but everything else Phone Destroyer has to offer is done better elsewhere
By Ric Cowley
| Nov 13, 2017 |
iOS + Android
Find out more about South Park: Phone Destroyer
SEE COMMENTS