Splasher review - Another generic 2D platformer or something with more colour?

Splasher doesn't have a particularly original storyline, but its gameplay makes up for that, and then some.

It's a 2D platformer with a twist, that sees you racing through levels, taking on enemies, and enjoying some classic, arcade-style action gameplay.

You play as a determined, purple-haired worker who has to take down the paint factory's evil boss, Le Docteur.

You have to get from the beginning to the end of each level, and also save workers on the way. These workers each have their own letter. Collect them all, and spell 'Splasher' to get full marks. 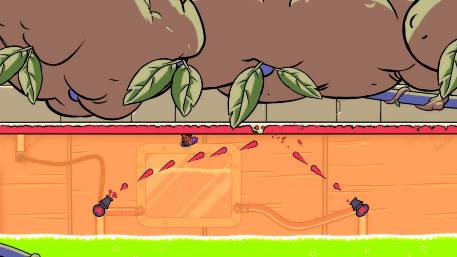 There's no definite tutorial but the controls are easy to pick up - you're running, jumping, and eventually shooting. Standard.

The interesting part is when the inks are introduced. Red lets you climb walls and run across ceilings, yellow makes you jump super far, and water washes the ink away.

It'll take you a few tries to get used to the speed of things, but the fluidity of the levels give the game a wonderful sense of urgency, especially in the jumping sections. These always feel so perfectly planned out, but it's not afraid to trip you up.

Each area is brilliantly constructed and can be completed once you've figured out the correct method. It doesn't feel impossible, just challenging.

Most enemies can be killed in one shot and it's easy to figure out that certain enemies need to be used for certain objectives, like drowning a bull-like creature to release one of your fellow workers in the bonus areas.

The game centres around a hub which you can progress through and unlock more levels as the game goes on. The difference between this one and games like Battleblock Theatre is that the layout isn't so linear.

You use water lifts and various platforms to move throughout the hub, but this might not be for everyone. 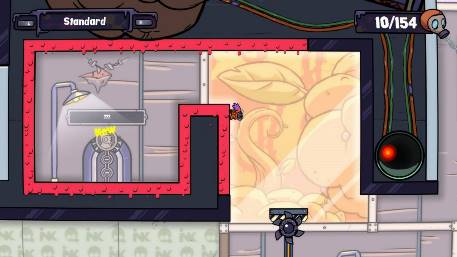 Story-wise, you're best not to go looking too deep here. It's a generic tale about a generic bad guy with a generic cause, but it's not a huge deterrent.

The soundtrack also falls a little limp in comparison to the fast-paced action of the gameplay and doesn't match up to the quirky, colourful design of the game.

Platformers are hardly a new thing, but in Splasher's case the introduction of small, interesting elements make it truly shine out from the crowd.

It may be lacking in some areas and might not offer up a lot of replayability once you've fully completed it. But you're going to enjoy the ride just the same, and for the money it's well worth it.

Splasher is an excellent platformer with interesting mechanics and beautiful level design
By Emily Sowden
| Nov 6, 2017 |
Switch
Find out more about Splasher

Paint the world red in challenging platformer Splasher, coming to Nintendo Switch on the 26th