(Animal) Crossing over to mobile

It's the moment we've all been waiting for - Nintendo finally pulled back the curtain on Animal Crossing mobile last night in a special Direct.

It's called Animal Crossing Pocket Camp, and on first appearance it looks like it'll be more than worth the wait.

So without further ado, let's go through everything we know about Animal Crossing Pocket Camp to get you up to speed.

Start by breathing a big sigh of relief, as Animal Crossing Pocket Camp looks every bit like a typical Animal Crossing. That means lots of colour, anthropomorphic characters with oversized heads, and a gameplay focus on making friends, exploring, gathering stuff, and crafting.

It shouldn't really come as a surprise, as Super Mario Run and, to a lesser extent, Fire Emblem Heroes have both played very much like the real thing. It just looks like Nintendo has really pushed the boat out this time to reproduce the experience in its entirety on mobile.

Exploring the countryside and gathering resources is the stuff Animal Crossing is founded on, so it's wonderful to see it playing a massive part in Pocket Camp.

In the trailer, we see a character wandering through a forest collecting fruit, fishing at the seaside, and catching bugs. The seasons also seem to regularly change, so perhaps we'll see seasonal resources making an appearance too.

This isn't just for kicks, as each item you collect can be used elsewhere, but we'll come back to that.

You have to build a campsite

Animal Crossing has never been an aimless experience - you're always driving towards a primary goal. This time around it's building a campsite back to its former glory.

That's where those resources come in handy. Gather enough of them, and you can craft amenities that provide fun for any visiting campers. We saw a swimming pool, a stage for a band, and a skatepark in the trailer.

The more amenities you own, the more visitors will want to come back. It sounds like a nice little project that's perfect for dipping back into when you get a spare moment. That's perfect for mobile.

It wouldn't be Animal Crossing without being nice and making animal friends, and Pocket Camp has that in abundance. 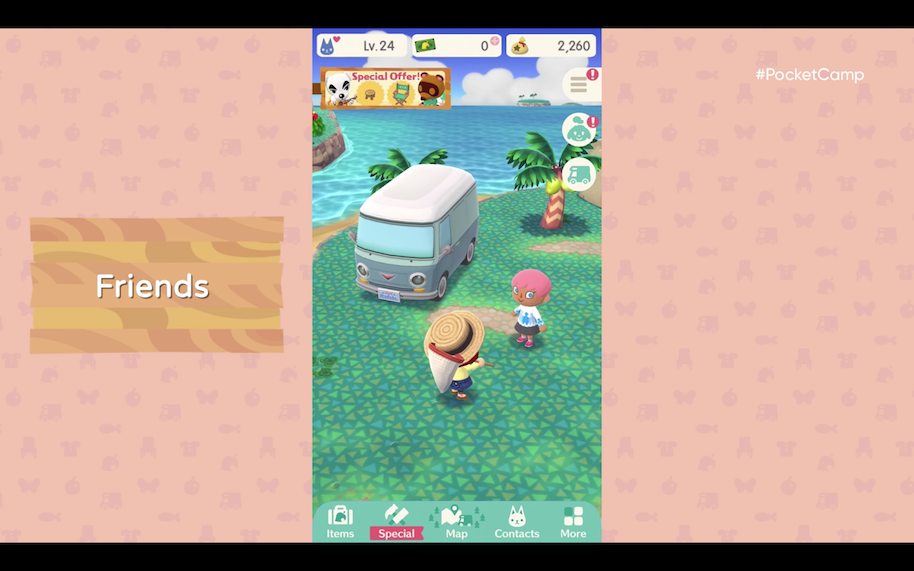 If you want to make sure your friendly animal visitors return to your camp, you can greet them and perform tasks for them. In typical Animal Crossing fashion, that mostly involves collecting or making stuff for them.

Do this often, and you'll grow your friendship with them. That's the secret to having a healthy and active camp.

You can furnish and decorate your own camper van

It's not just your camp that you'll spruce up though, there's also your home as well. This time around it's a camper van, which fits the theme nicely.

You'll craft furniture and decorate it to make it nice and cosy. That also counts for its outside appearance too. You can fully customise that, as well as increase the size of it overall.

I imagine you'll use the van to get around the various different explorable areas as well. That would be nice.

You can play dress up

Finally, there's your very own character to dress up and customise. According to the official site, there'll be 163 items of clothing at launch. I don't even want to try and count how many possible combinations that leads to. 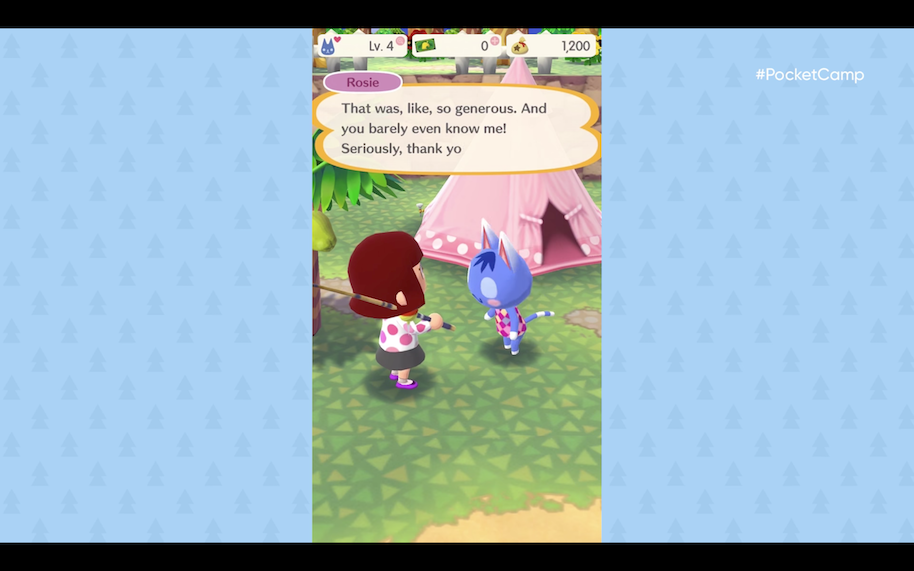 Suffice to say that character customisation is deep. Real deep. Not only will it be fun to play dress up, but collecting all of the pieces will likely be too.

Judging from the trailer, you can change your top, bottoms, shoes, and throw on a hat and sunglasses.

Yay! Animal Crossing characters! It wouldn't be the same without them, and they're in abundance here.

Isabelle appears to be your main helper, but we also spotted a bunch of other recognisable characters. Yes, that includes your favourite guitar playing pooch, KK Slider.

For a complete list of characters that will appear at launch, check out this handy page on the official site.

It seems to sync up with Animal Crossing: New Leaf

We're not sure exactly how this will work, but on the official site Nintendo claims that "If you have played Animal Crossing: New Leaf - Welcome amiibo, you might reconnect with more than a few old friends!" 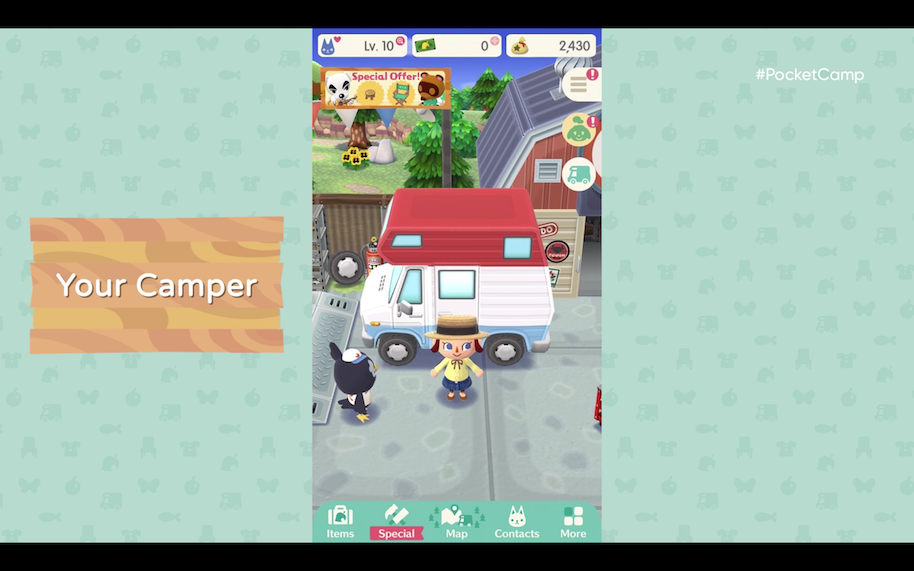 We can only assume that means if you've played New Leaf with the Welcome amiibo patch, and synced up your NNID on your 3DS and your mobile, you'll get extra goodies? Perhaps a few characters will leap right over?

Your guess is as good as ours! Let us know your thoughts in the comments.

It's free to play

Just like Fire Emblem Heroes before it, Nintendo has opted for a freemium model for Pocket Camp.

Again, we're not entirely sure how this will work in practice, but given that it seems to revolve around making stuff, you can probably safely assume the free to play elements will speed all that up.

There'll also likely be exclusive cosmetics as well, like clothes, and maybe even exclusive furniture and amenities.

Whatever it is, Nintendo has been pretty fair with its freemium mechanics so far, so you can safely expect to enjoy the full experience even if you don't plan on paying a dime. 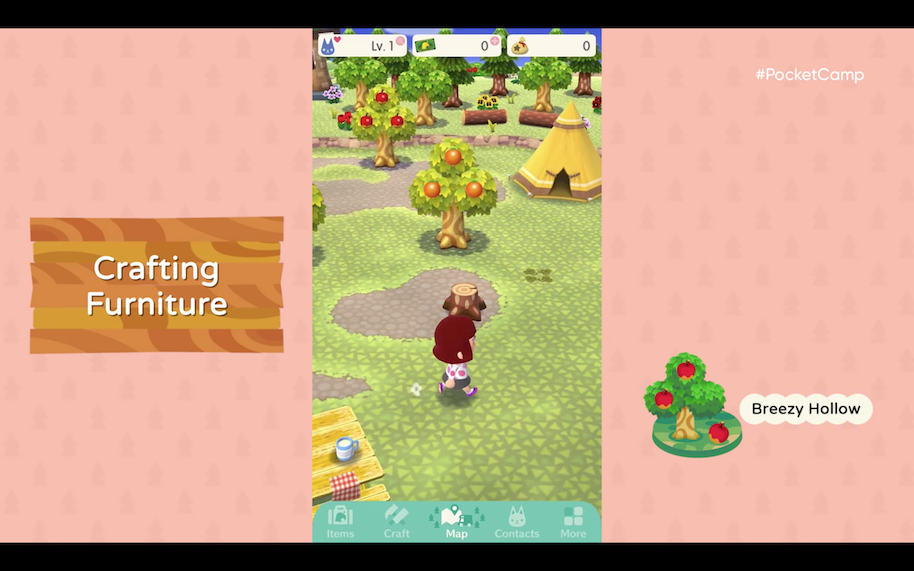 It will launch in November and you can pre-register now

Finally, Animal Crossing Pocket Camp will launch at the tail end of November, right in time for Christmas. Thanks Nintendo!

In the meantime, you can pre-register right now to grab it as soon as it officially lands.

Those lucky enough to live in Australia can grab it right now though, as it's just soft launched over there. Lucky people.