Smash Up is a card game. But it's not a deck-builder like you might be used to. Instead you choose two different factions, and their cards are shuffled together to create the deck you play with.

You might think that means you end up with a game lacking in strategy, but that's not the case at all. It just means that the strategy comes from a different place.

There's definitely a lot to like here. And while there are a few niggles, namely with the controls the game offers, you're still going to have a great time playing it.

The factions you're choosing from all have their own set of skills. Dinosaurs are giant damage dealers. Ninjas are sneaky. Pirates are, well, piratical.

You make your choice at the start of every game, and from there you need to earn victory points. You do that by smashing up the bases that make up the play area.

Each base has a set number of hit points. Your minion cards each have a strength score. When the total amount of strength on a base is higher than its hit points, the victory points are handed out. 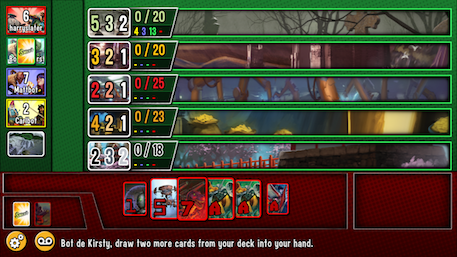 Some bases add different elements to proceedings, and some of the factions have cards they can play after that hit point limit has been reached. Figuring out how to use everything you've got at your disposal is key to victory.

The controls here are the only real problem. You're not dragging and dropping cards, and since that's such a familiar thing to do it'll sometimes catch you out. Some of the buttons you need to push are often a little small when you're playing on an iPhone too.

But those are pretty small niggles, and the game underneath them still manages to shine through pretty darn brightly.

Thrown in online and local play, and you're left with a decent adaptation of a really good game. It's one you're going to have to put some work into getting good at, but it's definitely worth it.

There's a thick and juicy thrill to smashing through the bases and messing up other player's plans, and while it might not be as deep as the likes of Hearthstone, there's still enough here to impress even the most devoted card playing fan.

A smart card game that's different enough from other games of its ilk to stand out
By Harry Slater
| Oct 16, 2017 |
iOS
Find out more about Smash Up

Smash Up is a new digital card game adaptation for iPhone, iPad, and Android