If you're looking for a fun, cooperative experience to play with your friends, Lovers in a Dangerous Spacetime does that with bells on.

It's colourful and bright, it's simple yet also not so simple, and it's just an all-over riot to play with friends if you've got the right number of controllers.

Playing single-player is still an option, but it's an entirely different experience.

Lovers in a Dangerous Spacetime is a 1-4 player shooter where you've got to save the universe from the threat of the Anti-Love and rescue poor space bunnies from their cages.

The overall goal is to rescue a certain number of space bunnies per level and collectively use them to unlock the next level with their love. 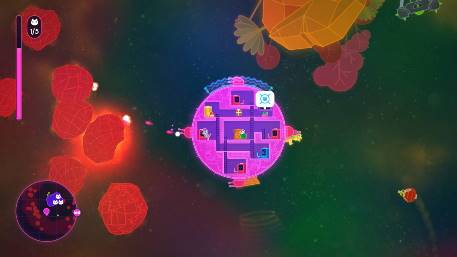 Levels are randomly generated, meaning each time you start the game you'll get a different experience.

Once you've brought a ship back to life you're thrust into the tutorial where you learn which of the seven consoles can be used for steering, shooting, using a map, and shielding your ship.

For one person alone it's too big of a task to go through the ship constantly changing between the consoles, but luckily if you do take it on alone you get a little AI pet to help you out.

This pet can be told where to go at any time and automatically starts shooting, mapping, piloting, or shielding like an absolute pro while you flail about a bit.

There are four major campaigns to work through, each consisting of four levels and a boss, and a ton of different enemies. Excitingly, the enemy types also differ in the way their attacks affect you.

It can be very hectic at times, especially when playing on your own and running around the ship like a headless chicken, but that's half the fun.

Plus, if you're finding things too difficult to beat you can always drop to a lower difficulty in the menu. There's no shame in it, just love.

As the game goes on you can find upgrades through the levels which can be added to your ship. These can be applied to your engine, shield, or guns to give them a little extra juice, so it's best to investigate each level fully before heading off. 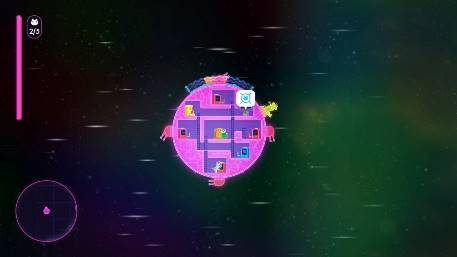 The experience does become a little repetitive despite it being a shortish game (about 6-8 hours), so if you're going solo it could be best played in snippets rather than a couple of longer campaigns.

It was also a bit irritating to get stuck on the ladders when coming off them, or trying to get back onto a console if you've accidentally exited them. Again, these are minor gripes.

Lovers in a Dangerous Spacetime is a fun game regardless of how you play.

Playing cooperatively, you'll shout at your friends and have to work together as a team to beat hordes of oncoming bug monsters. If you take on the task alone, you'll have a bigger challenge with more of a tactical theme.

Perhaps if you're not that bothered about shooters this won't be for you, but it's a cracking game to play with a bunch of friends or on your own.

Lovers in a Dangerous Spacetime