Eminence is an interesting one. It's a card game played out on a gridded board. You lay down your warriors to fight it out against an opponent for domination.

It's quick-fire, but it's wrapped up in some slick trappings that make the whole thing hum off the screen.

And despite the simplicity of the play on offer, there's actually a decent amount of strategy here if you're willing to dig a little deeper. And that's no bad thing at all.

The game sees you and an opponent facing off against each other across a 3x3 grid. You take it in turns to lay down cards. These cards have numbers on their four sides.

If you're in control of most of the board when all of the spaces are filled, then you win the round. You've got five cards each, but a 4-5 victory won't win you the bout. 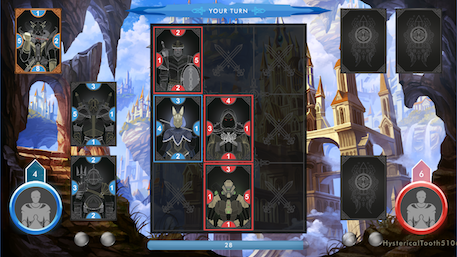 Tactical thinking is key to victory. If you've got a card that's weak on two sides but strong on the other, placing it in the middle of the grid is a bad idea. Plop it in the corner for maximum effectiveness.

Planning your moves is important too. With some clever play you can capture multiple cards at once, turning what might have looked like a defeat into a resounding victory.

There's a good reason to try and win as well. The defeated player will give up one of their cards to the victor. So you need to be on your toes or one of your hard-earned fighters could be lost forever.

Eminence is basically a midcore take on the deck builder, but don't let that put you off. It's every bit as smart as it needs to be, and it's polished to a super crisp sheen as well.

The brief play times make it perfect for gaming on the go, and you can sink as deep as you'd like into the deck-building chunk of the game. Sure, it might not challenge Hearthstone for its crown, but that's not what it's trying to do.

This is a game built to be enjoyed in brief, vigorous spurts. Coming back to it after a week won't leave you at a disadvantage, and for a good deal of us that's something pretty darn important in our mobile entertainment.

A clever and engaging card game that won't take up too much of your time
By Harry Slater
| Oct 6, 2017 |
iOS
Find out more about Eminence: Xander's Tales

The 6 best family board games to play this Christmas