Geostorm review - A movie tie-in game that GOes for broke

By Harry Slater
| Oct 5, 2017
iOS + Android
|
Geostorm
Get Geostorm on...
Find out more about Geostorm
Available on: iOS + Android + Steam

If you told me Geostorm the film was actually an elaborate practical joke, I wouldn't be surprised. It looks like a parody trailer, full of science nonsense and hammy acting.

By the same token if you told me that the Geostorm mobile tie-in game was actually pretty good, I would have to pinch myself to see if I was dreaming.

So get those pinching fingers ready, because the Geostorm mobile tie-in game is actually pretty good. In fact it's skirting the realms of being great.

Storm on the horizon

The game takes most of its cues from Square Enix's GO series. So you're in control of a character, making your way through a series of levels where you can move one square at a time.

In order to get through them you need to solve puzzles. There are blocks to push, switches to pull, and exits to clear.

It's pretty simple stuff, but the game plays really well. The controls are tight, the puzzles sometimes take a bit of thinking, and the levels are just the right size for mobile play. 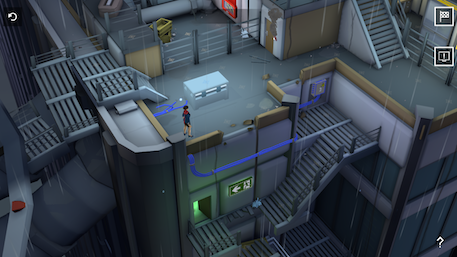 While it doesn't have the deep rooted spark of ingenuity that made the original GO games quite so exciting, there's still an awful lot to like here.

The graphics are slick, the challenge level ramps up just the way you want it to, and the game isn't afraid to chuck new ideas at you to keep things interesting.

It shouldn't be your first port of call for an experience like this, but if you've rinsed Deus Ex GO and it's ilk, then there's definitely cause to give this a try.

I realise it comes off a bit weird telling you to go and play a tie-in game. It's sort of against the ethos of what most of us have learned throughout our gaming careers, but trust me on this one.

It's not going to shake you to your very core, or make you rethink any prejudice, but it will keep you entertained.

This is content junk food, much like the movie seems set to be, and if you head in with that attitude you're not going to be disappointed.

Geostorm is better than it has any right to be, and it's well worth a look
By Harry Slater
| Oct 5, 2017 |
iOS + Android
Find out more about Geostorm
SEE COMMENTS

Dive into battle with Naval Storm TD on Android

Turn-based puzzler Geostorm is the official mobile game of the upcoming movie, out now on iOS and Android