Gilbert's at it again

Thimbleweed Park is the latest point and click creation by the prolific Ron Gilbert. It riffs on the classics of yesteryear, with gorgeous pixel visuals, an old school UI, and music that will give you 90s feels.

It's set in the eponymous fictional town of Thimbleweed Park, in which five people who have nothing in common end up. Thus begins an adventure to figure out some stuff.

At review, we gave Thimbleweed Park a Gold Award and said: "It may look like a normal point-and-click puzzler but Thimbleweed Park is complex, classic, hilarious, and will have you coming back for more".

We also asked the App Army what they think, and here's what they had to say.

I liked this game but for me it lacked excitement. That said it has plenty to offer. It brings out the detective in the player with to-do lists, character flashbacks, and plenty of interaction.

The gameplay is straightforward tap action and the dialogue is amusing but the music, as in so many games, is boring and bland. The to-do lists keep you on track so you know where to go next and the workload can be split between the two federal agents in charge of the case. 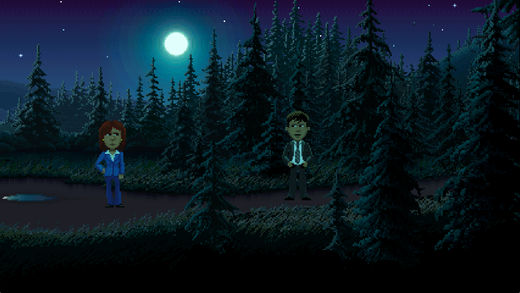 Not a bad game but not a brilliant one either.

I've never played the Monkey Island games that people are so fond of, but Maniac Mansion holds a special place in my heart. That's the game that made me love point and click adventures.

Thimbleweed Park feels like a return to form for the genre, what's not to love?

It's perfect for touchscreens and you'll feel right at home issuing commands. The characters really shine, and each has its own quirky charms. I absolutely love how the game goes out of it way to make fun of previous games by the developer.

The voice work is stellar and each puzzle makes a lot of sense. This game works hard to not waste your time from skipping dialogue with swipes to teleporting across the map later on.

I've loved every second and I'm not done yet. This might even change genre doubter's minds. 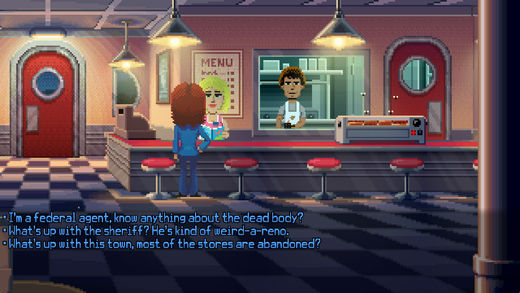 Unlike other interactive RPGs, Thimbleweed Park adds a new element to the genre. Rather than merely tapping on an object to interact with it, you have to pick a verb. This takes thought, as there are many combinations of words and objects to try in order to complete the tasks.

The voice acting is amusing at times and guides you through the game, giving you small clues as to what you're meant to do. There are a couple of options for difficulty in the game which dictate how much the game helps you, but even the casual setting will have you scratching your head.

I'm enjoying the game so far but do need to spend more time with it to really get into it as it isn’t for the casual mobile gamer.

If you're a fan of classics like Maniac Mansion, Day of the Tentacle, or Monkey Island there's one question I really need to ask you: why are you reading this when you could be playing Thimbleweed Park? Everyone else, please read on.

Taking aim at The X-Files, Twin Peaks, and small town America, the slightly surreal jokes come thick and fast. It's difficult to play without a smile on your face. An early example is Pigeon Brothers Plumbing, two guys dressed as birds trying to fix a burst pipe. Just thinking about it has brought on a silly grin.

The retro graphics are a great fit considering Thimbleweed Park's heritage, they suit the mood perfectly. If you're thinking of passing on this because of the graphics I implore you to reconsider, you'll miss out on something special. 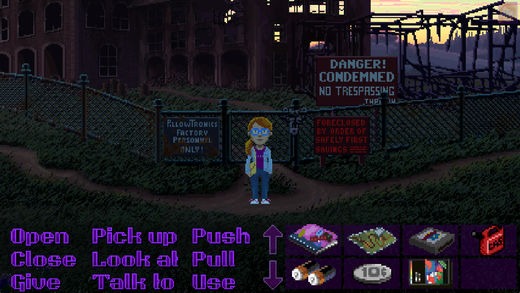 Puzzles are the bread and butter of the genre, and Thimbleweed Park doesn't disappoint. They're superb, and never leaving you wondering what you need to do but often clueless about how to do it.

I've never been a huge fan of retro point and clicks but this one is a slick, smart adventure that sucks you in with it's interesting characters, deep story, and plenty of nods to the era it's set in.

Some of the puzzles drove me insane but each character has a to-do list which helps, as you can come back to the more tricky areas later on.

The voice acting is okay and does the job. It's not up to Monkey Island's standards but at this price you can't have everything. If I had one gripe it's that it wasn't always obvious where to click but with so many characters to play (I've found five so far) you can just go and do something else. In fact, I've found on a couple of occasions that this was necessary as the puzzle required two characters to complete it.

It's a great game, and well worth your money. 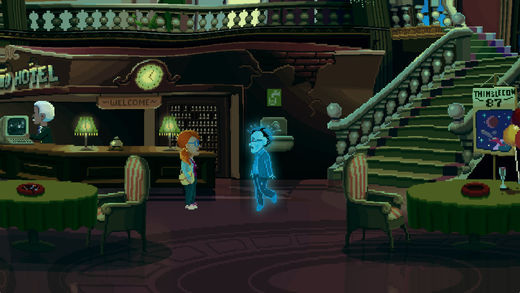 A murder case that riffs on Twin Peaks and The X-Files with classic point and click adventure gameplay. Veteran players will recognise Ron Gilbert's style, from the characters to the setting.

Most of the puzzles are based on a keen sense of observation as important clues are spread through the environment and dialogue.

There are loads of references to classics like Monkey Island and Maniac Mansion. It's a funny, catchy, and nostalgic experience but a good start for newcomers in the genre also.

The long lost love child of Monkey Island and The X-Files has finally been uncovered!

This game is exactly what I look for in a point and click adventure. From the nostalgic visuals to the quirky humour and references. If you've played similar games in the past, nothing is going to surprise you. But as they say, if it ain't broke...

The plot is both intriguing and comical, maintaining your interest and keeping you pressing on with the investigation. The devs have clearly worked hard to make this accessible on all devices and I had no issues clicking around the screen or choosing dialogue options. 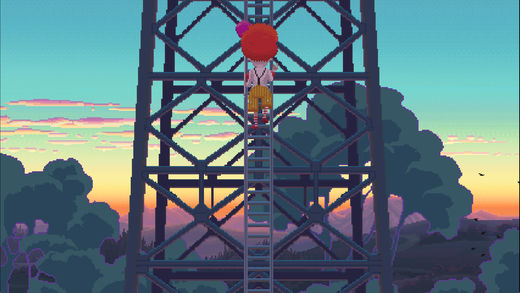 A highly polished and highly recommended game for fans of the genre.

Campfire Cooking is a stylish and relaxing cooking puzzler, coming to iOS in October