You can stand the heat

Cooking Fever is a time management simulation that takes place across a series of themed restaurants. Players will cook and serve a variety of dishes to walk-in customers, including cakes at a bakery, hamburgers at a fast food court, lobster at a seafood bistro, and plenty more. The latest update added a new location for digital chefs to master: Hell's Kitchen, which attracts diners with its pan-seared tuna, peach iced tea, and modern décor.

Hell's Kitchen is the most challenging restaurant yet, with minimal amounts of cooking utensils and surfaces available to start and high costs for upgrades. Our tips below will help you maximize what little you have to work with so you don't get trapped in kitchen purgatory. 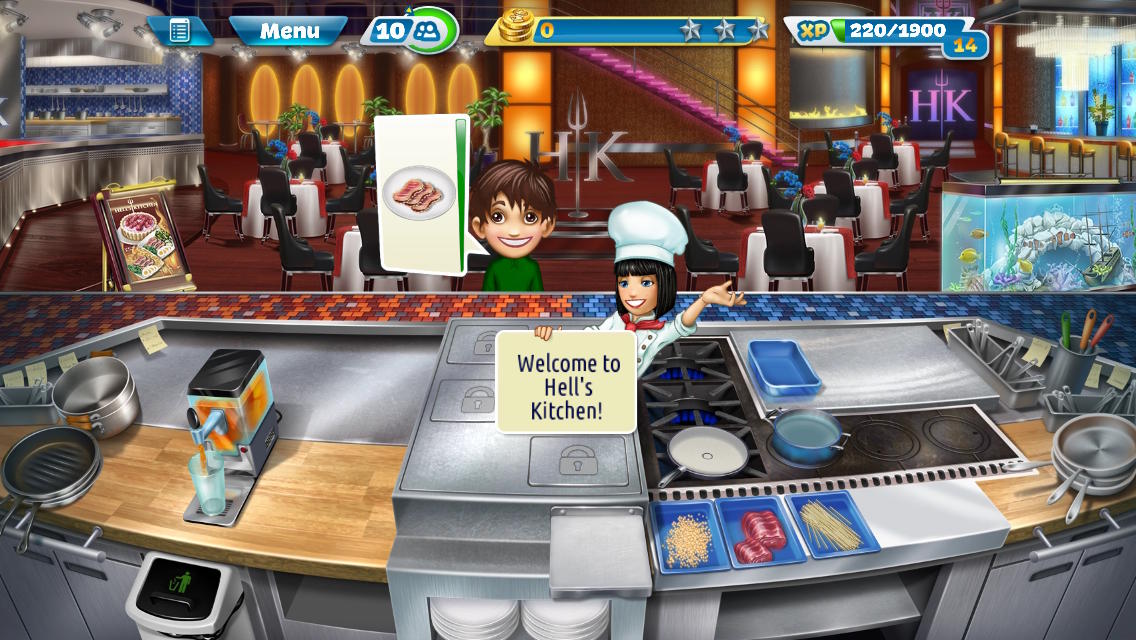 Be prepared to spend gems

Merely unlocking Hell's Kitchen has a significant upfront cost of 10,000 coins and 15 gems. However, if you want to actually complete all forty levels, you're going to have to shell out even more gems on upgrades: only one area of the Hell's Kitchen interior can be upgraded with coins alone, and nearly every kitchen upgrade will cost gems even at level one.

While "spend gems on upgrades" is an obvious way to improve your scores and progress through the levels, it's even more necessary in this location simply because of its high difficulty and cost. If you're low on gems, you can earn more by playing other restaurants you've unlocked and collecting their every-five-stages rewards, testing your luck on the slot machine, or replaying stages and completing achievements to earn EXP and level up. 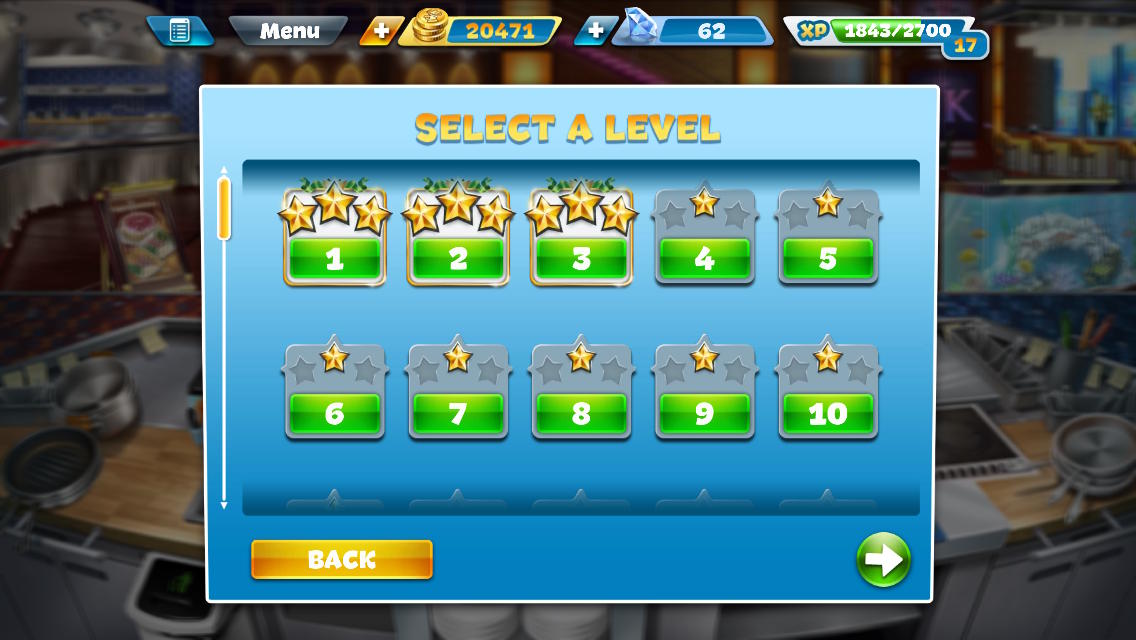 Win with one star

Remember that you don't have to earn three stars on a level right off the bat: you can always go back later—ideally after you've been able to afford more upgrades—and improve your score. You will beat a level and be able to move on as long as you reach the one star minimum.

You can usually tell if it's possible to beat a level with your current set of upgrades by the score you earn: if the score meter is close to the first star, you likely just need to improve your own efficiency. However, if you played well and the meter is only halfway to the minimum, you're likely at a point where you need to start buying upgrades to progress. 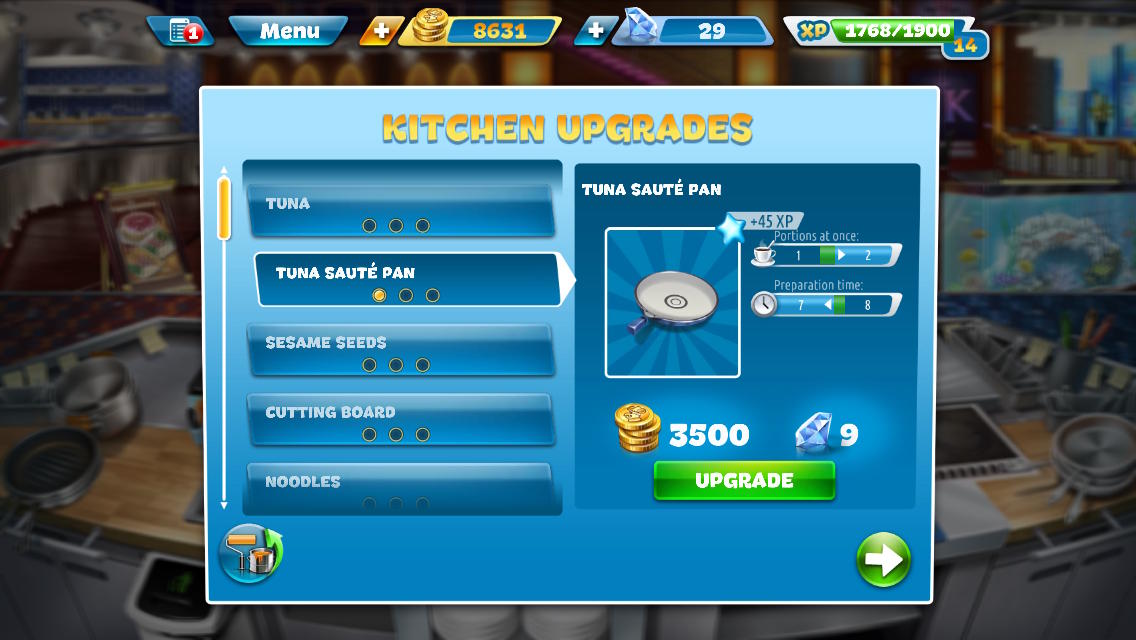 To make it through the first set of Hell's Kitchen levels, we recommend shelling out 1,000 coins and four gems for the first tuna sauté pan upgrade, which will reduce the tuna preparation time to eight seconds. Tuna is the primary ingredient in every dish and you'll need plenty of it: saving a couple of seconds on every piece of tuna will speed up your serving time considerably.

With this upgrade and efficient cooking, you should be able to make it through the first six levels. After level six, you'll unlock lettuce. This is the first kitchen item you can upgrade with only coins: we recommend upgrading it twice as soon as it's unlocked. 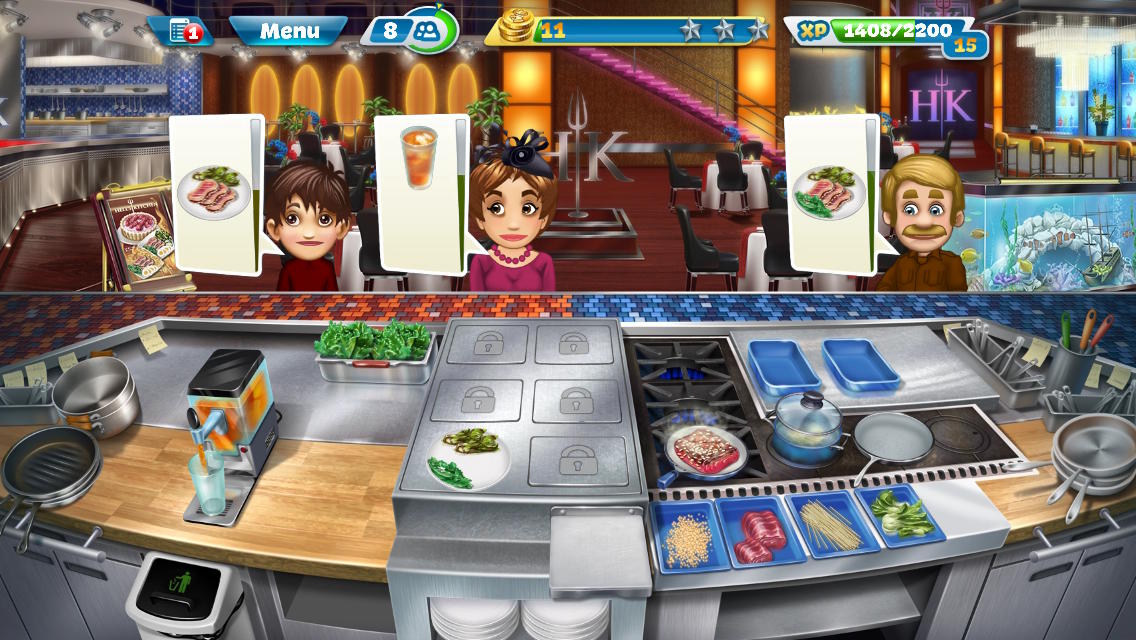 After this, prioritize any customers that request a meal with lettuce. You'll earn more from them thanks to the lettuce upgrade, as well as the fact that their meal is more complex. In the image above, we were originally making a bok choy meal for the customer on the left but then changed it to a lettuce meal when the customer on the right showed up.

Once you complete level eleven, you'll unlock the food warmer. This can also be upgraded with only coins. At level two, the food warmer can store two pieces of cooked, uncut tuna. Purchase this once it becomes available and then make sure you always have tuna cooking by swiping pieces into the warmers as soon as they're finished. Unlocking one more tabletop slot—which costs 1,000 coins and two gems—can also provide an additional storage space for any cooked food item. 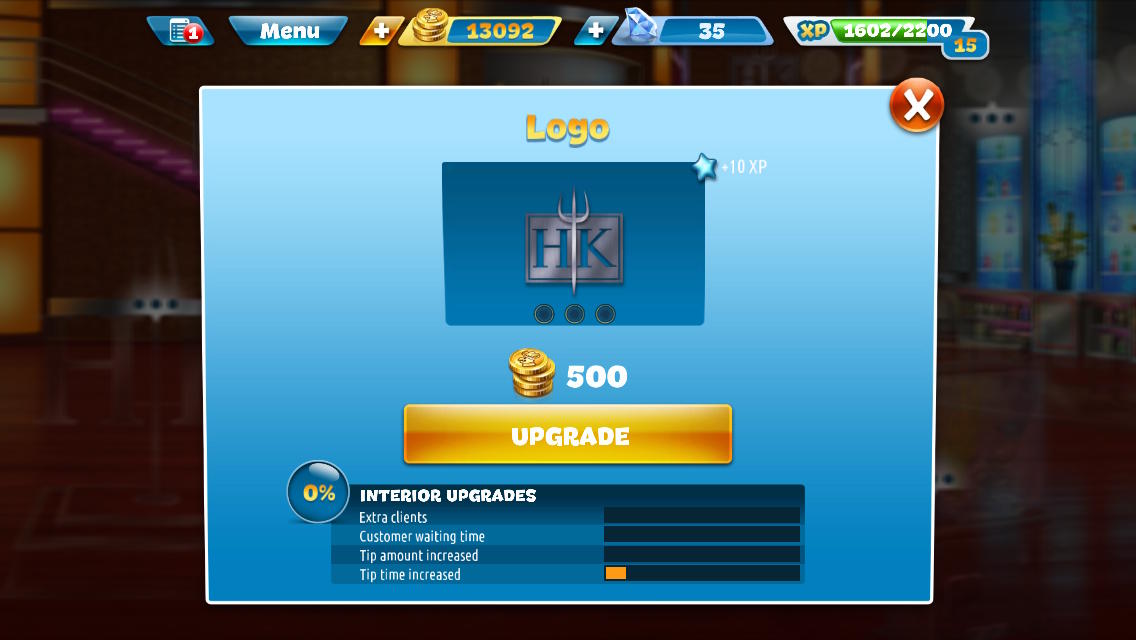 As for interior upgrades, the logo above the door can be upgraded without spending gems. It will boost your tip time a decent amount once upgraded twice. The menu, aquarium, and juice bar all cost a small number of gems (in addition to coins) to upgrade, but provide a solid improvement to customer waiting time, which is extremely short without any upgrades. Upgrading all three will only set you back six gems and 3,000 coins. 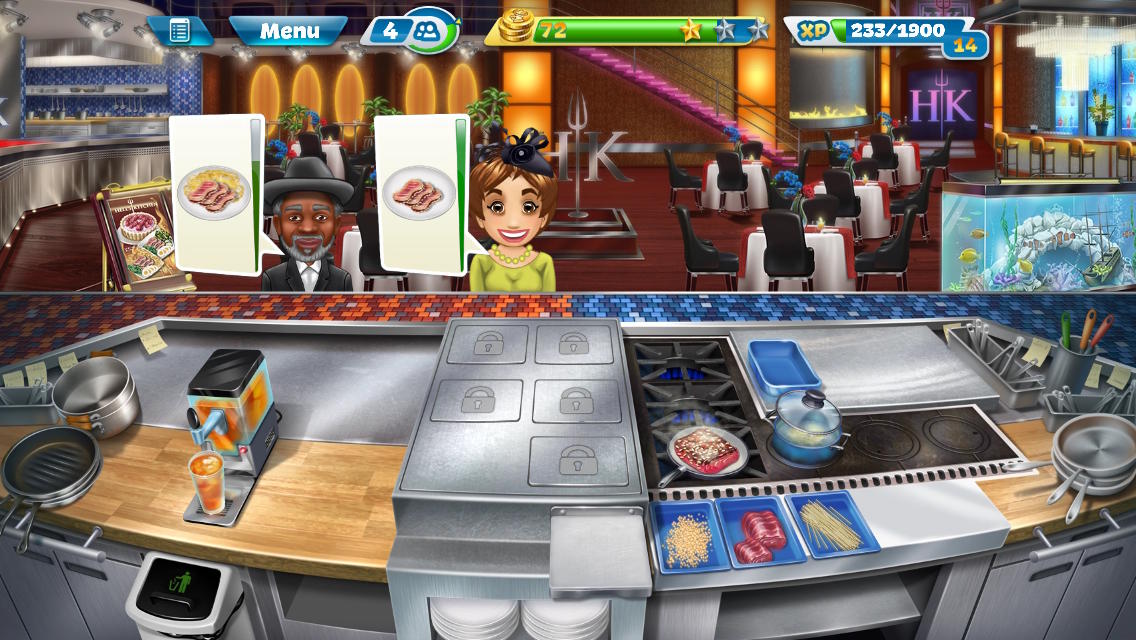 When preparing tuna for the sauté pan, you don't actually have to tap the tuna container. Just tap the sesame seeds twice and a piece of tuna will be dipped in seeds on the first tap and then placed in the frying pan on the second. Quickly double-tapping the sesame seed container should become a default habit in Hell's Kitchen.

The bok choy and noodles are both cooked with the lid on for a few seconds and the lid off at the end. When the lid flies off, they're still cooking: wait for the pan to actually flash red before you tap to remove the item.

Levels are the same every time you play them, so you can learn customers' orders by playing a level once and then be prepared on subsequent playthroughs. If you know a noodle request is coming up next, make sure noodles are cooking or already cooked. This won't be quite as important until you reach later levels with more complex orders, but memorizing orders can allow you to have plates ready before they're even requested. 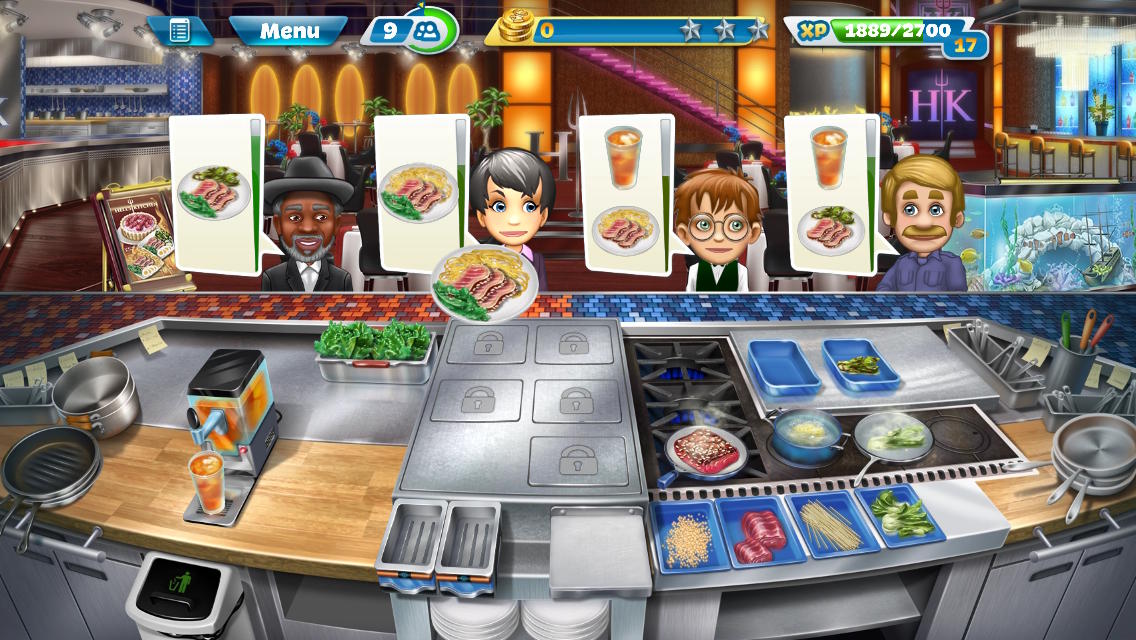 Remember that patrons with multi-item orders will regain some patience when given one of their items. If someone requests tea in addition to food, hold off on giving them their tea until their patience meter has dropped a bit so you actually benefit from the boost. In the image above, we're not too worried about the customer on the far right since we can just give him a peach tea to refill most of his patience.

Don't obsess over a lost customer. In Cooking Fever you don't lose points or money when a customer grows too impatient and leaves: you simply don't receive the money they would have given you otherwise. It's better to serve a newly arrived, happy customer quickly—and receive a tip—than to salvage a customer already on the brink of leaving. If you're preparing a tuna-and-noodle dish for an angry customer and someone new shows up and requests the same dish, give it to the new person instead.

Similarly, you don't lose points for leftover food, only items thrown in the trash. Continue preparing food you might need until the very end: anything remaining will not be counted against you, so keep on cookin'.