Iron Marines review - The mobile RTS we've all been waiting for?

When was the last time you played a mobile RTS that made you go "oh lordy, lordy, this is something a bit special"?

Even if you translate those words into things actual people think, I'm going to bet that it's been a good long while, if ever.

Well, let me introduce you to Iron Marines. It's a game that mixes together ideas from plenty of other mobile genres, and squishes them into something really rather good. And it's premium, so there are no wait-timers or ads, just fun.

The game is set in deep space, and sees you playing the commander of the titular marines.

You're tasked with saving human colonies from an invading alien army. And as the game goes on you'll get more tools to use to do just that.

Your main weapon in the scrap is your hero unit. They're tough, durable, and have special skills they can use to their advantage in skirmishes. Alongside them you have a variety of troops.

Rangers, snipers, giant stomping mechs that fire out gouts of deadly flame. You'll add to your army as you get deeper into the experience, and upgrade your hero as well.

There's definitely a tower defence feel to things here, as you might imagine from the dev behind Kingdom Rush. But don't let that put you off. There's far more going on here, and a greater slice of freedom too. 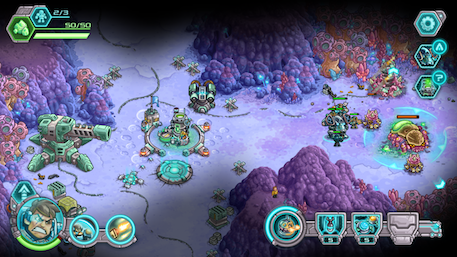 Missions involve traversing large levels, completing objectives. There are bases to defend, installations to protect, and enemies to blast into pieces. You build machine gun outposts, and draw your army from special transportation devices when you've got resources to spend.

Iron Marines takes the simplicity of the tower defence genre, but then layers a thick and difficult RTS on top of it. There's not much fiddling around here, and that makes the whole experience perfectly suited to mobile.

Sure, there are a few niggles, especially when your units are stood close to each other and you're trying to move them around, but it's rare that that happens.

There's a delicious heft to everything happening here, and even on the lowest difficulty setting, it's a tough nut to crack. In short, it's pretty much everything that you want from a mobile RTS.

It might not have the scope of more traditional RTS games, but that's not what Iron Marines is looking to do. It wants to take the meat of the genre, throw in a few mobile twists, and then plonk the whole kaboodle into the palm of your hand.

And it manages to do that with some real gusto. It's fun, it's deep, and it's almost certainly going to make you exclaim with joy. Iron Marines is the mobile RTS that we've been waiting for, and it's a little bit brilliant.