Is Klask really a board game? I mean, it's a game that you play on a board, but there are no dice, cards, or chits. But then, is Hungry, Hungry Hippos a board game? I think we all know the answer to that.

What is Klask? Well it's sort of like air hockey played on a wooden table, but with magnets, and sometimes you have to shout Klask, but I'm not entirely clear about the rules around that bit.

Essentially it's a one on one game that sees two players trying to score six points first. You score points by getting a ball in a goal, by sticking magnets to your opponent, if your opponent puts themselves into their own goal, or by grabbing their piece when they fall over. 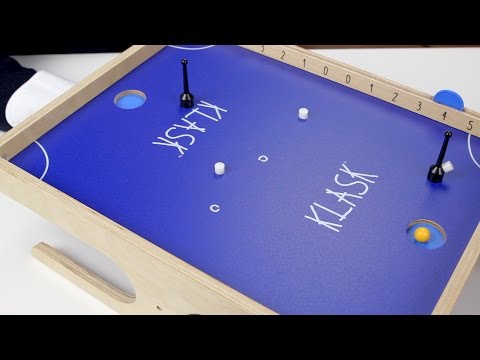 I know, that all sounds like the hottest sort of nonsense, but bear with me, because I think this is exactly the sort of thing that would work wonders on mobile. Obviously without the magnets, because that would just ruin your phone or tablet.

Well, probably just your tablet. This is the sort of game that needs a decent amount of real estate. But when it comes to same-device multiplayer on a tablet, it could well be the next big thing. You know, if it ever comes out.

There's a ludicrous pace to the whole thing. If you were to compare it to a videogame you might go for Slamjet Stadium or Ring Fling. Fast, slightly reckless, and insanely competitive.

But on top of that it's a crazy amount of fun, and proves that board games don't have to be musty fusty affairs. They can be quick, they can be exciting, they can involve shouting Klask at the top of your voice for reasons I still don't understand.

Digital board game Terra Mystica is getting a new expansion next week, and we've got the details right here

Here's how you can run your own digital board game night