A horned army encroaches from all sides, threatening to overwhelm your forces. Thankfully, the cleverly-designed Minos Strategos lets you fight back through smart strategy and its unique card-based tactics.

At its core, Minos Strategos is a mix of puzzle game and turn-based tactics, presenting you with a starting set of units, temple tiles that must be occupied to collect points, foes that relentlessly approach with each turn. Gather the necessary amount of points, and you succeed at that rank; et the minotaurs accrue points instead and you fail.

Early minotaurs only move forward turn-after-turn, but soon more appear: plague minotaurs threaten to spread their explosive capabilities to adjacent minotaurs, flaming variants that can move extra spaces, among others. 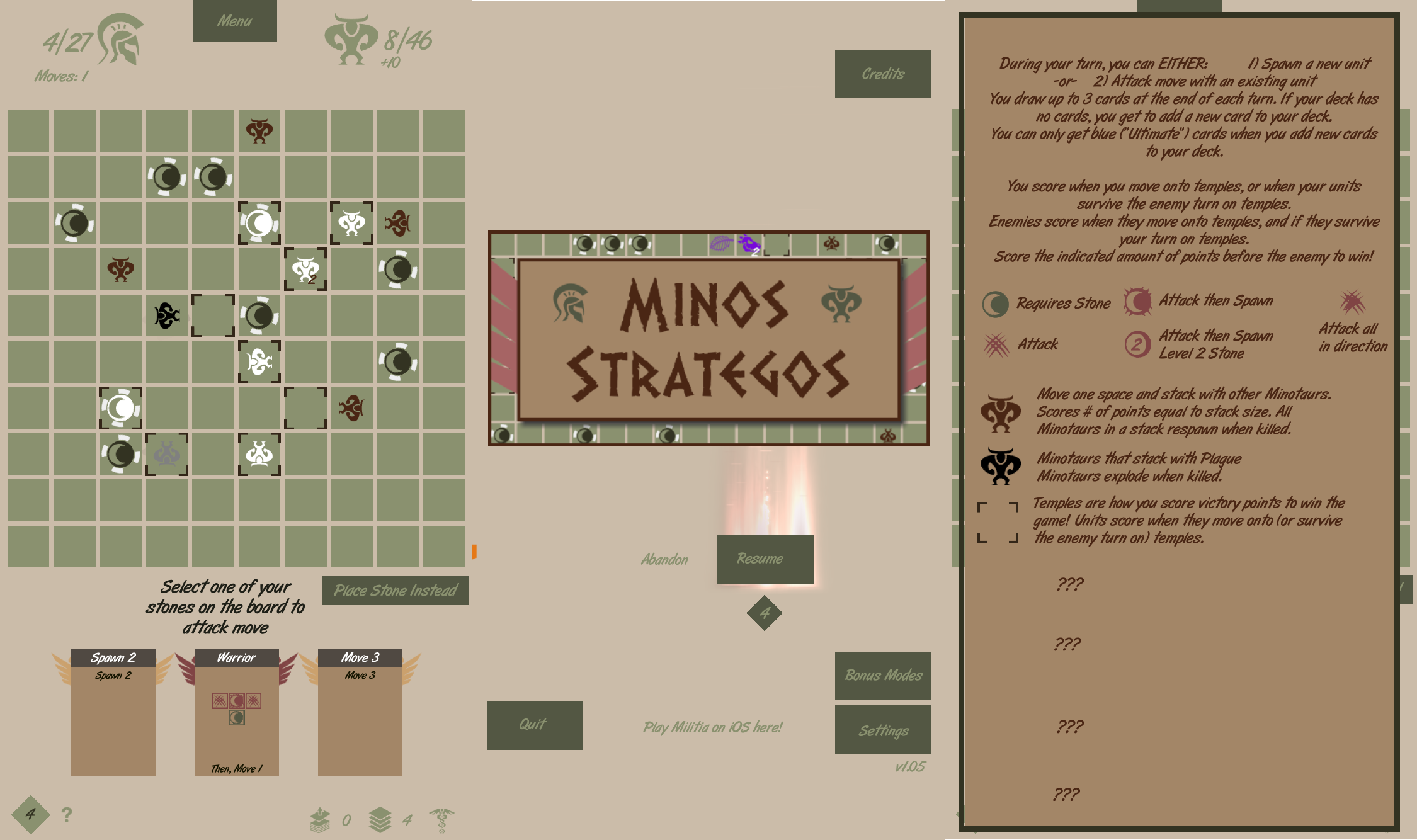 Each minotaur introduces another wrench in your planning, suddenly great strategies are thrown into disarray, and your captured temples face occupation. Minos Strategos is a constant evolution of tactics, every new element adding another variable to consider.

That evolution extends to how you play as well, since beside placing and moving units, you can draw from a hand of three cards each turn to unleash special maneuvers. These actions are often dependent on unit placement, and can range from spawning additional units in specific foundations to blasting cannon fire in all directions. Each successful rank rewards you with experience and new cards added to your deck upon levelling up.

This card system is the lynchpin of Minos Strategos' design. Placing units, grabbing temples and avoiding minotaurs is already an intense juggling act, and now you must also consider placement and position, formations and effects.

Do you place or move multiple units in a single turn, making up for the pieces that will be destroyed in the minotaur's turn? Perhaps sacrificing pieces is worthwhile if it means placing minotaurs in the crossfire of one of your card attacks. Which attack, which minotaurs, which direction to aim your attack, which card do you discard at the end of your turn, can you move units into position to activate your desired card?

This combination of card skills, units, and predictable movements by your enemies makes Minos Strategos feel more like an odd variant of Chess rather than a puzzle roguelike, where you can plan moves ahead, considering the future state of the grid, and moving pieces into position for traps and captures.

All these moving parts and introduction of new cards as you progress means Minos Strategos can have a substantial, perhaps frustrating, learning curve, even as the game eases you in with a tutorial and gradual adding of new minotaur types. But practice and learn from your losses, and you'll find a challenging and deeply strategic title in Minos Strategos.

It may take some time to master the game's complexities, but Minos Strategies offers clever design and deep strategy in spades
By Christian Valentin
| Sep 18, 2017 |
iOS
Find out more about Mino Strategos

Build the most efficient roads possible in Freeways, the new puzzle game from the creator of Desert Golfing