By Harry Slater
| Sep 8, 2017
iOS
|
Atomine
Get Atomine on...
Find out more about Atomine
Available on: iOS

Atomine is a fiendish twin-stick shooter that looks unlike anything you've ever played on your mobile before. It mixes glitchy cyberpunk graphics with super slick arcade gameplay.

And there's a level of polish here that makes the game fizz off the screen. It's the sort of game that makes you want to play more, while never pulling any punches.

If you're looking for the next premium game to stick onto your iOS device, then there's a very good argument to make it this one.

You're controlling a node, weaving through a series of levels and blasting red enemies into literal digital bits. Ostensibly you're hacking into a computer system, and the bad guys are the security you're trying to bypass.

The levels are thick and grey, made of towers that morph and change as you move through them. There's a chunkiness to the blasting that makes everything feel solid. You're a part of the world in a way that few mobile shooters can manage.

The controls feel just right, and you never miss a shot or fail to dodge a bullet because of them. But it's not the sort of game that just offers surface fun. 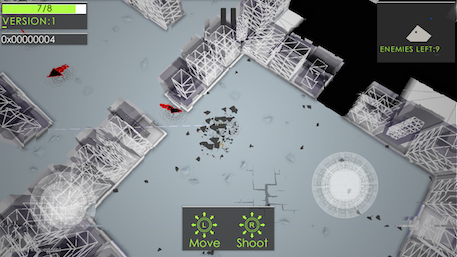 There's a depth to the game that unlocks as you play through. You'll change the loadout of your node, picking a style of blasting that suits the way you play.

Things aren't offered to you on a plate though. To get the most out at Atomine you need to discover things for yourself, finding the different mechanics and additions through exploration.

And that's key to the experience. This feels like a grown-up game, the sort of experience you're going to remember when you put it down.

Atomine is the kind of game we need to see more of on the App Store. It's not just polished, it's massively entertaining, and it sucks you in with smart play and no hand-holding.

Atomine does everything you want from a shooter, then a little bit more
By Harry Slater
| Sep 8, 2017 |
iOS
Find out more about Atomine
SEE COMMENTS

Cultist Simulator, the next game from Fallen London's creator, could make its way to mobile

New iOS, Android, and Nintendo Switch games out this week: The Binding of Isaac: Afterbirth+, The Guides Axiom, LEGO Worlds, and more