The Anker PowerCore+ 26800 PD makes a very bold claim: it can power the Nintendo Switch as fast as when docked, but when you're on the go.

If true, that's quite the prospect. It would solve the problem of the relatively poor battery length - one of the major concerns for Switch owners.

This isn't just a portable battery for Switch owners though. Given the USB-C charging port, and two USB ports, this is also perfect for those with a fancy new MacBook and iPhone.

It will also charge those at optimal speed as well. So what you're really getting for your money - potentially - is all of the benefits of charging at mains when you're on the go.

You're not buying a portable battery for its appearance, but it is worth mentioning that the PowerCore+ is a sleek and very premium looking product.

It's got a lovely matte metal finish and is very minimal, with a simple Anker logo and button the only distractions on its surface. The button even has a lovely set of LED lights that tell you how much battery you have left.

In short, you won't feel embarrassed about whipping this thing out in public at all. It holds its own against the MacBook, Switch, and iPhone and people might even think you're cool for owning one.

Again, you're not going to hold the Anker for prolonged periods of time so how it feels is irrelevant. However, it is worth mentioning that it's quite a hefty device at just over half a kilo.

That's twice the weight of the Switch itself, and at 18 cm long it isn't exactly small either. Again, that's nearly as long as the Switch with Joy-Cons. 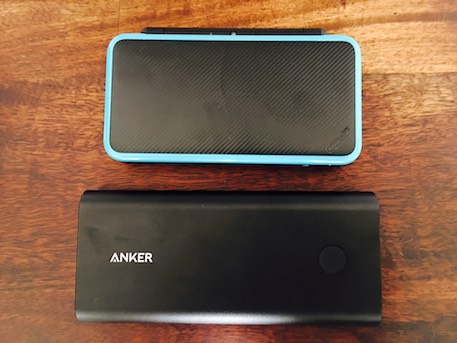 It will fit in your pocket, but not comfortably. It'll poke out a bit. You're really going to want to bring a bag with you, but I guess you're already used to that if you own a big old Switch.

Though if you're buying this primarily for mobile phone charging, it might make more sense to buy a smaller, more lightweight solution.

Most importantly though, how does it perform? Well, we can safely say that you won't have any problems at all in that regard. It does everything it says on the tin.

It absolutely charges your Switch as fast as when docked, so you can play Zelda for two hours and you won't have lost any battery.

At full battery, you can charge your Switch about three times. So if your Switch is fully charged too, you're looking at a whopping 12 hours of portably play. That long haul flight will fly by.

However, it also charges other devices super quickly as well. I used it plenty of times to keep my mobile topped up on the go, and was regularly surprised at how fast I could get to full battery.

In short, if you're buying the PowerCore+ 26800 PD primarily for using your Switch on the go, it won't let you down. It absolutely charges as fast as when docked, and when everything's fully charged you'll get up to 12 hours out of it.

As a nice bonus, it also charges your other devices super quickly. We tried a 3DS and iPhone during our tests, and both topped up rapidly.

If there are any downsides, it's that the device is quite heavy and bulky. But if you're bringing a bag to carry your Switch anyway, that won't be a problem.

It's only problematic for those that like to shove one in their pocket. That is possible here, but it won't be comfortable. Then again, it's not really designed for it.

So if you own a Switch and want to keep it topped up on the go, grab this. It performs perfectly, can keep your other devices topped up too, and even looks good while doing it.