If you've not heard of Full Throttle, it's one of the classics of the golden age of point and click adventures. Designed by Tim Schafer, some consider it the pinnacle of Lucas Art's work.

And now it's time for the mobile port. It comes packed with the charm, humour, and neat ideas that made the original such a blast.

But the translation to touchscreen is a little on the fiddly side. And that dulls the brilliance of the game that you're poking your way through.

Full Throttle tells the story of bike gang leader Ben. There's some preamble, a double cross, and then you're left on your own to try and save the rest of your motorbike brothers.

It's an interesting set up, and it allows the game to wander off in some more action orientated directions. You're not just solving puzzles here, there's bike combat too. 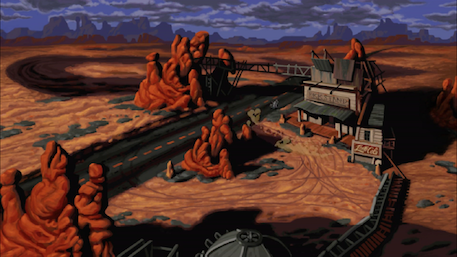 And that puzzle solving is pretty streamlined. You've got a few options when it comes to interacting with things in the world. My favourite is the kick one, because it lets you kick things. Mainly doors.

The puzzles themselves follow the slightly rocky logic that fans of the genre will love and everyone else will groan at. The formula is usually find a thing, use the thing in a way that maybe you weren't expecting.

Long pressing the screen brings up a wheel of choices. Dragging your finger around eventually highlights the objects that you can poke.

But you'll often find yourself swiping around just to figure out what you're supposed to be doing. And the controls aren't that slick. You'll be tapping and poking more than you should be just to move from A to B. 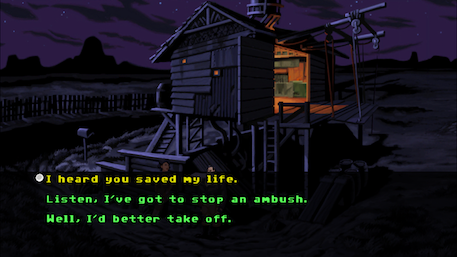 It's not the best put together port we've seen, and that's a shame. The extra complexity in the original acts as a buffer between you and the game. This isn't a game that was devised for touchscreen, and it shows.

But the game underneath is every bit as brilliant as it ever was. And it still feels like an outlier in terms of theme and style more than 20 years after it was first released.

It's just that the port is a little bit too clunky. I urge you to poke and prod your way past it, because the story here is one that deserves to be played by as many people as possible.

This isn't the best way to play Full Throttle, but if it's the only way you've got, then you should still pick it up and give it a bash.

There's still a wonderful game here, it's just a little hamstrung on a platform it was never designed for
By Harry Slater
| Jul 21, 2017 |
iOS
Find out more about Full Throttle Remastered
SEE COMMENTS

Full Throttle Remastered is on sale for the first time, can be yours for a mere £2.99