Leap On! review - A one-touch arcade game that gets a little one-note

There's a lot to like about Leap On. It's a clever one touch arcade experience that sees you bouncing around, hitting some white blobs, and trying to avoid getting smashed to bits on the black shapes.

But there's some frustration here too. It's just not as fun as you feel like it should be, and even when you get the hang of things you still won't be enjoying yourself as much as you should be.

There's fun to be had, but eventually the shine just sort of slips away and you'll find your attention wandering to other one-touch games.

The game sees you orbiting a central point on the screen. There are white circles around it, and you need to bounce on these to rack up your score.

To bounce you press down on the screen. Then you'll swoosh back down towards the centre of your pivot point. Release and you're free to bounce higher again.

It's a simple system, and it works reasonably well. There are twists too. Completing a full circuit of the central point ups your multiplayer, and hitting a black shape will kill you. 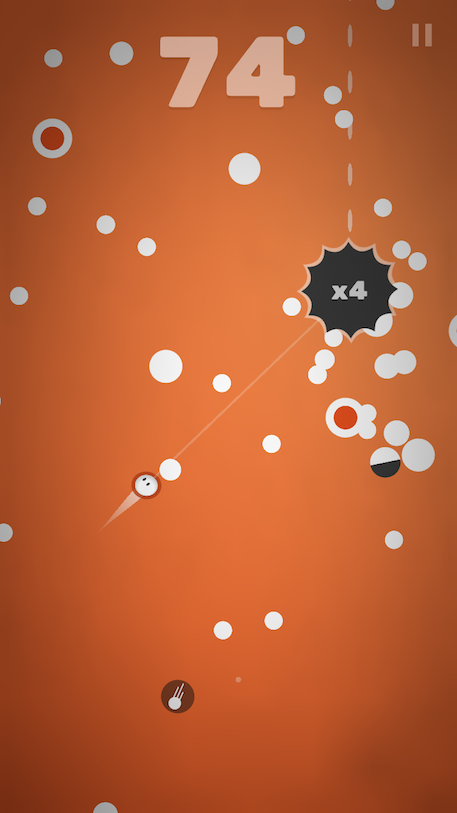 There are power-ups as well. Some of these give you an extra boost in your jumps, or draw blobs closer to you to make your progress easier. Then there's one that turns you into a circular saw killing machine.

Oh, and the very centre of your pivot point is a spiky death trap that'll kill you if you touch it. Bounce around, score some points, rinse and repeat once you've died. There are challenges that see you trying to jump as high as you can too.

But after a while it's all a bit samey. It's fun for an hour or so, but after a bit that compulsion to jump back in will fade away and you'll probably uninstall.

Shoes all in a line

There's nothing fundamentally wrong with Leap On, it's just not as intriguing or engaging as some other games out there. And when the App Store offers you so much to choose from, that's a pretty big black mark.

You might be able to suck some entertainment out of Leap On, but I'm not sure whether it's going to be enough to really warrant a download.

There are some neat ideas here, but they never come together to make something truly memorable
By Harry Slater
| Jul 20, 2017 |
iOS
Find out more about Leap On!
SEE COMMENTS