Shephy is a game that not everyone'll get. It's fast-paced, but for the wrong reasons, and a good example of how popular games in some parts of the world may not tickle the western gamers.

If you're looking for a card game that you can play for hours, understand straight away, and play without fear of frustration you may want to move along.

Baa baa black sheep, have you any wool?

Shephy is a Solitaire-like card game in which you start with one sheep on the board and play up until you get to 1000. 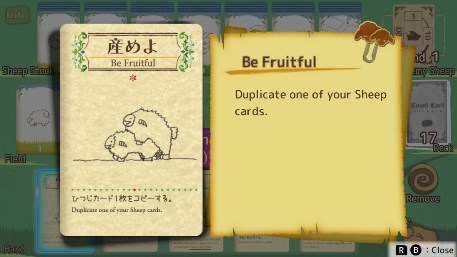 Cards like 'Multiply' and 'Be Fruitful' help you build your sheepy population up, whilst cards like 'Famine' and 'Meteor' kill them off.

It's a balancing act. Though it may seem a little overwhelming at first, the rules are pretty easy to pick up after a few games.

There are also a few modes to choose from. Play casually, get some practice in, or even follow a scripted story (which gets pretty dark).

The art style is simple but pleasant. The cards have a doodled and humorous look - or, however else you want to describe a couple of scribbled sheep doing the nasty.

You can also press the 'R' button to get information about the card you're hovered over, which definitely comes in useful.

While it's quite a difficult game, it's also addictive at first in that 'just one more try'-sort of way.

Unfortunately, that addiction quickly burns out as you realise that there are so many other things you could be doing with your time.

If you've got the patience to learn the ins and outs of Shephy you'll likely feel differently about it, but the experience began really grating after half an hour or so.

The number of negative cards (the ones that kill off your sheep) outweigh the positive cards, and that makes the whole experience feel a bit unfair. 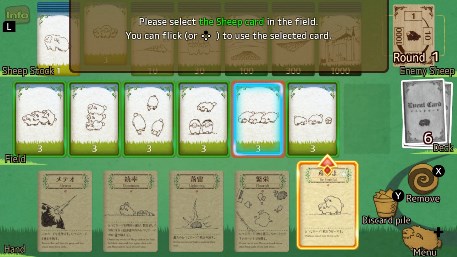 Just when you think you've progressed in the game, you'll likely find your hand will fill up with bad cards and BAM, your flock's quickly killed off.

While the interface is simple and clean, there are parts of it that are pretty confusing, like the buttons on the right-hand side.

Though you may originally think the 'Remove' and 'Discard' buttons worked in your favour, it only shows you what cards you've already gotten rid of.

Oh, wait. They're all dead

After seeing such good reviews for the mobile version, it's a little surprising to feel so disappointed by the game.

It's probably one for the determined Solitaire players looking for something fresh, or for those who really love a good challenge, but ultimately Shephy is unbalanced and a little clunky.

Shephy has a lot of promise, but ultimately lets itself down by unbalanced decks and somewhat messy rules
By Emily Sowden
| Jul 13, 2017 |
Switch
Find out more about Shephy

Shephy is a card game all about... sheep sex?

Shephy, the solitaire sheep game, is headed to the Nintendo Switch this week