Last October King announced that Candy Crush Saga would be getting its own real-life game show on CBS, and a couple of months later they named Mario Lopez as the show's host. Well, the actual mobile game will be getting a bit of love too, starting this week. 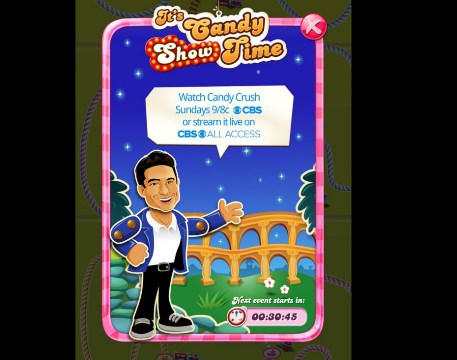 In order to promote the TV show King will be launching a series of in-game events across the CC Saga games, with a candified version of Mario Lopez playing his part as the show's host.

Each week in CC Saga you'll get four mini challenges to boss through, imitating the obstacles contestants will face on the show. You'll get a prize each time you beat one of the stages and if you defeat all four of them you'll get a hunky treasure chest full of delicious rewards.

In CC Soda Saga you'll be able to choose from four teams and then try to reach your team's set target. An in-game tracker keeps tabs on how you're doing. Finally, in CC Jelly Saga you'll face a time challenge to collect as many cupcakes as possible. If you reach your target you'll get a gift at the end of it.

The events will be running for a period of 48 hours every weekend for the television show's entire 10-week run, starting on July 7th.

Digital board game Onirim gets updated with new expansion, Crossroads and Dead Ends