Mini Guns is a real-time PvP battler where it's all about strategy, not just gun power

Set in a vibrant, cartoony world, Mini Guns is a strategy game where players battle each other in real-time PvP combat. Play on your own in intense single-player mode, or form an Alliance with friends to play cooperative multiplayer.

Combat-wise, you'll be able to deploy two factions at first: The Republic or The Dominion. As the round progresses you'll build up Action Points to be able to unleash your Minis on the battlefield and use tanks, warplanes, and drones as you push on the enemy's base. There are over 100 to collect, so you're spoilt for choice.

Minis are teeny little army men and women that you can collect and upgrade. Split into three categories (infantry, vehicles, and air), you can choose the right approach and devise the right tactic for taking down your opponent.

There's no definitely release date for Mini Guns just yet, but it is in soft launch on the App Store in Canada, the Philippines, Brazil, and Singapore. Apparently the game'll be launching worldwide 'soon'.

If you'd like to give the game a go but you're not in the aforementioned regions, check out out our handy guide on creating a foreign iTunes account to get you started. 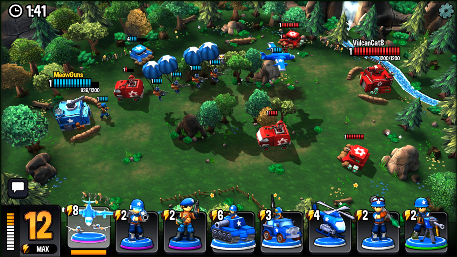 Build up the ultimate racing team in Grand Prix Story2, out now on iOS and Android

Last Pirates codes and how to redeem them - July 2021