By Harry Slater
| Jul 5, 2017
iOS
|
Kalimba
Get Kalimba on...
Find out more about Kalimba
Available on: iOS

There's something really rather special about Kalimba. When it kicks off you're going to think you've seen it all before. Another platformer where you're controlling two characters at the same time? Big whoop.

Well, actually, yes. Because Kalimba takes the subgenre in directions you've never even thought of before. It's smart, it's tough, and it's not afraid to punish you when you fail.

But you're not going to mind when that happens. The learning experience is part of the fun, and there's an awful lot of fun to be had here.

The game is all about rebuilding a giant totem pole. To do this you need to collect the shattered pieces. And to do that you leap through a series of gorgeous looking levels.

The twist, as I might have mentioned, is that you're controlling two little critters. One's purple, the other's green. Get them both to the end of the level and you'll unlock a new chunk of the pole and the next challenge. 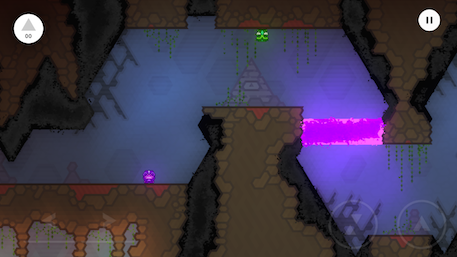 But it's not just about getting to the end. Finish the level and you'll get a new part of the pile, but finish it having collected all of the glowing pick-ups and not having died, and you'll get a pole-section that's made of gold.

Every death, every missed star, and you'll lose some of the sheen from your prize. It's a clever system, and it adds replayability to the experience.

The controls are standard enough. Buttons move you left, right, and let you jump. There's also a button to swap the positions of your characters, and this is key.

There are times when you'll be met with sections of glowing coloured ooze. The purple monster can move through purple goop unfazed, the green through green. But if they touch the wrong coloured material they'll die instantly. 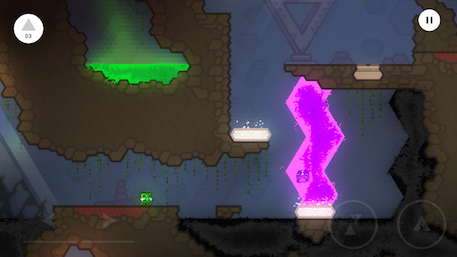 You'll need to stack them on each other's heads, use double jumps to avoid touching the wrong things, and swap quickly to avoid tumbling deaths.

It's incredibly smart, and it's not even the half of it. Sometimes one of our heroes is walking on the roof, the other on the floor. Sometimes the floor is so slippery you can't halt your movements.

Every level seems to add a new idea, a new challenge, and it makes you want to push on to see more.

Kalimba isn't just slick, it's utterly compulsive. Each time it adds something new you need to change the way you think. Yet that core platforming experience is still thick, juicy, and delicious.

If you think you've seen everything that mobile platformers have to offer, think again. And then go and pick this up, because it's really rather brilliant.

A smart and slick platformer that just gets better the deeper you get into it
By Harry Slater
| Jul 5, 2017 |
iOS
Find out more about Kalimba

Futurama: Worlds of Tomorrow - There's a fun game in there if you dig deep enough