It's time for a heist

Only a few days after the voice talent was announced, we know now that Augmented Empire will be headed to Gear VR in a couple of weeks. 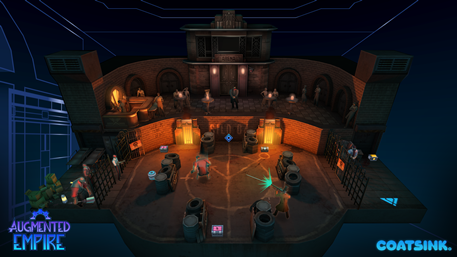 The world of New Savannah is a harsh one with clear, dividing lines between three tiers of the Citizen Grade System. The elite live comfortably atop the city in lush apartments whilst the less fortunate are cursed to live in the grime and shadow of the lower districts.

From the armchair of your hideout, you control a team of six misfits through an 'augmented reality' world and interact with the office around you. Develop your team's skills, make calls, plot jobs.

With 10+ hours of gameplays, 26 missions, six upgradable characters, 60 environments, and the voice talents of Nick Frost (Hot Fuzz), Kate Mulgrew (Orange is the New Black), Doug Cockle (The Witcher series), and Garrick Hagon (Horizon: Zero Dawn), this is one to keep an eye on.

Friday is the digital adaptation of the solo board game, out now for iPhone and iPad