Safari Kart review - A game about driving karts, and not much else

There's nothing in the way of tinkering. Your kart is your kart, it is standard. Get in it and go race. You can choose a different character, but ultimately they're all basically the same.

There are weapons, there are speed boosts, but in the end this is a slightly unimaginative trundle around tracks that we've all trundled around before.

You're playing a creature stuck in a brightly coloured vehicle. You've got no control over your acceleration - you go forwards, inevitably pushed towards the sweeping corners of the track.

Buttons on the left and right of the screen let you steer in that direction. Exclamation marks between them are your brakes. You probably won't use them to begin with. Pick up a weapon and it pops up on the right of the screen, to be tapped and unleashed. 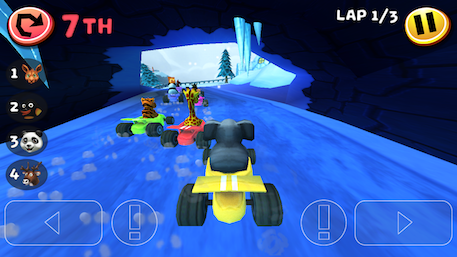 There are two modes, practice and career. Don't bother with practice. Career sees you driving in a series of championships. Win them and you'll unlock the next one, as well as some other goodies.

Once you've completed the three championships in normal, you'll unlock speeded up versions of the cups. Repeat that feat and you'll unlock even faster renditions. It's unlikely you'll get that far though.

The racing here is on the bland side. There are moments of seat-gripping thrills, but too often you'll end up at the front of the pack, not even bothering to look behind you.

You'll toss balloons and homing missiles and mines out, but they add little to the sense of tension that the game sorely lacks. And the AI seems incapable of using them in any meaningful way. 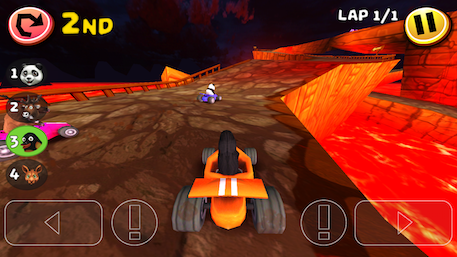 There's no multiplayer here, which stands as a huge black mark. Racing against opponents with human intelligence would at least have added some friction to the experience. As it stands, that's something else that's sorely lacking here.

Then there's the general roughness of the game. It's not a polished product, and the art style lacks any of the pop or pizzaz needed to keep your eyes interested.

There's nothing horribly broken with Safari Kart, but there's nothing here to entice you in either. It simply exists, a kart racer that's there and is basically fine but probably isn't worth picking up.

In the end there are better, more accomplished, and, most importantly, more entertaining kart racers out there.

A by-the-numbers kart racer that doesn't really offer anything new to the genre
By Harry Slater
| Jun 29, 2017 |
iOS
Find out more about Safari Kart
SEE COMMENTS