As in JezzBall, your goal in Scale is to repeatedly cut a square arena down to a smaller and smaller area without slicing the wildly bouncing ball trapped within those boundaries.

While the gameplay is fairly simple, there are certain strategies we've detailed below that can help determine if you walk away with a score of two or twenty. 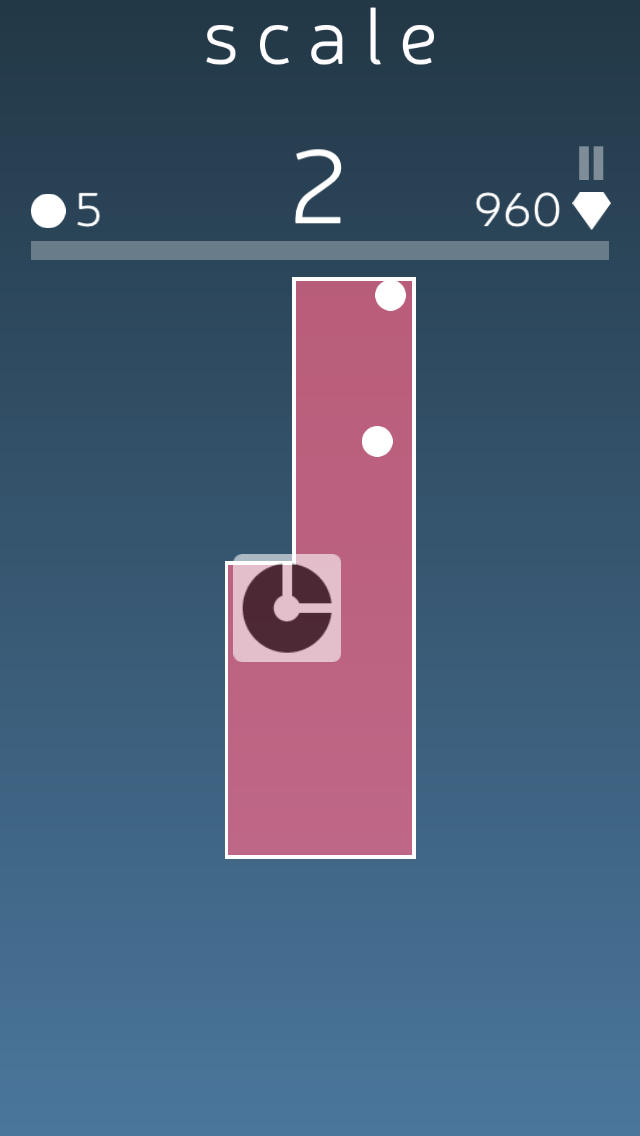 If there's only one skill you prioritise when playing Scale, it should be patience. Although the only way to make progress and earn a higher score is by slicing the screen at just the right moment, Scale is primarily a game about having the patience to actually wait for that moment.

None of the game modes contain a timer, so you have as long as you want to decide where to place your slicer and then wait for the right time to drop it.

The ball(s) in play often get stuck in a predictable trajectory, offering you a chance to place your slicer just as a ball passes a certain area.

However, they can also randomly bounce off a corner or each other and change speed or direction, so you have to pay careful attention to the balls at all times.

Don't get flustered by a change in direction: just hold fast and wait for that perfect moment. It will appear eventually. 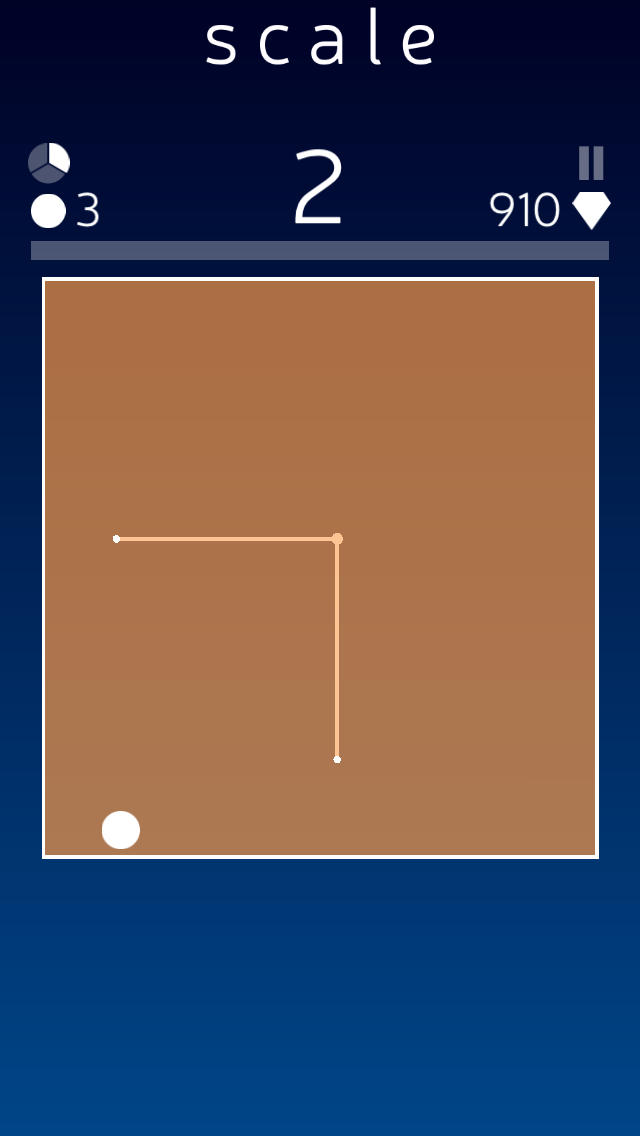 The only rule in Scale is that a ball cannot touch your cutting line while it is being created. Remember that you can trap a ball inside or outside of your slicer's cut: only the line itself is the danger zone.

It takes a few seconds for the slicer line to extend from where you place it to the actual border. This means you have to place a slicer not only in a section currently free of balls, but one that you can confidently predict will remain empty until the line finishes being drawn.

It's safest to place your slicer near the edges of the border to reduce the time it takes to draw the line. Drawing a line across the entire screen will cut more off the area in total, but is more dangerous than trimming a remote corner. 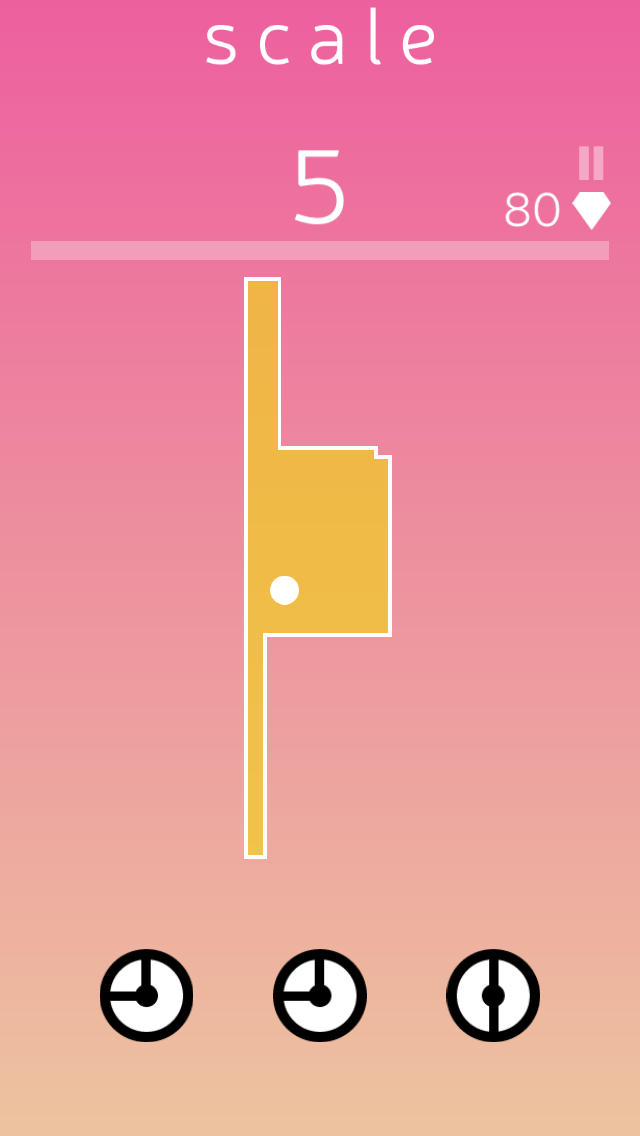 The name of the game

The board can only scale if there is room for it to grow. If you trim the board at awkward angles with long, thin corridors hanging off the sides, it will not be able to scale up. This makes the game much harder because your ball will be trapped in the smaller area and you essentially forfeit the "zoom in" bonus you get upon scaling.

Because of this, you always want to try and trim your area evenly, aiming for straight-edged squares or rectangles as opposed to lopsided boxes with tendrils sticking off the edges. 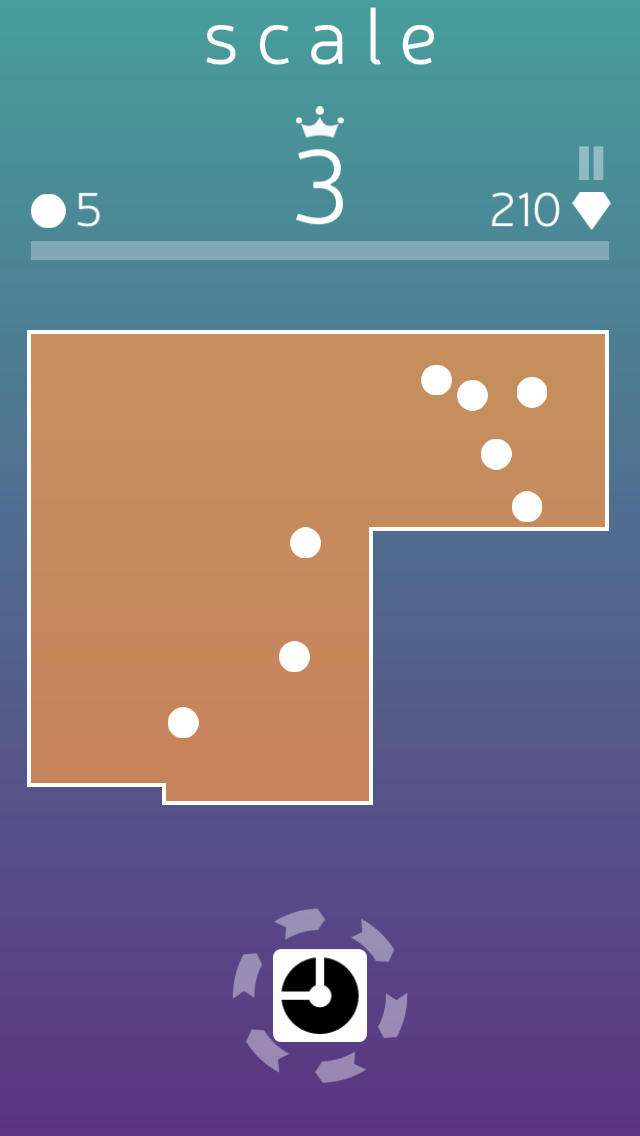 Scale currently contains five different game modes you can unlock with the diamonds you earn at the end of each playthrough.

The first mode, Scale, lets you make as many slices as you want to reach the next scale-up. You are given one slicer at a time and must use that slicer, although white slicers (in the original color scheme) can be rotated.

If you make a "perfect cut"—which is hitting the scale-up point with a single slice (cutting off a large chunk of the board all at once)—you'll earn a point towards an extra life. Three points equals one bonus life.

The second mode, Just 3, requires you to reach the scale-up point with only three slices. You are given three slicers to start and can use them in any order.

If you make a perfect cut with one slicer, the other two will be discarded and you'll receive three new slicers for the next round.

Plus 1 lets you use endless slices like Scale, but every time you scale-up a new ball is added to the screen.

You can cut between balls to eliminate them, reducing the number on screen to make later rounds easier.

The game will keep the larger segment with a ball inside of it. So, if you make a cut between two balls, whichever segment is larger will remain and the smaller piece will be disposed of. 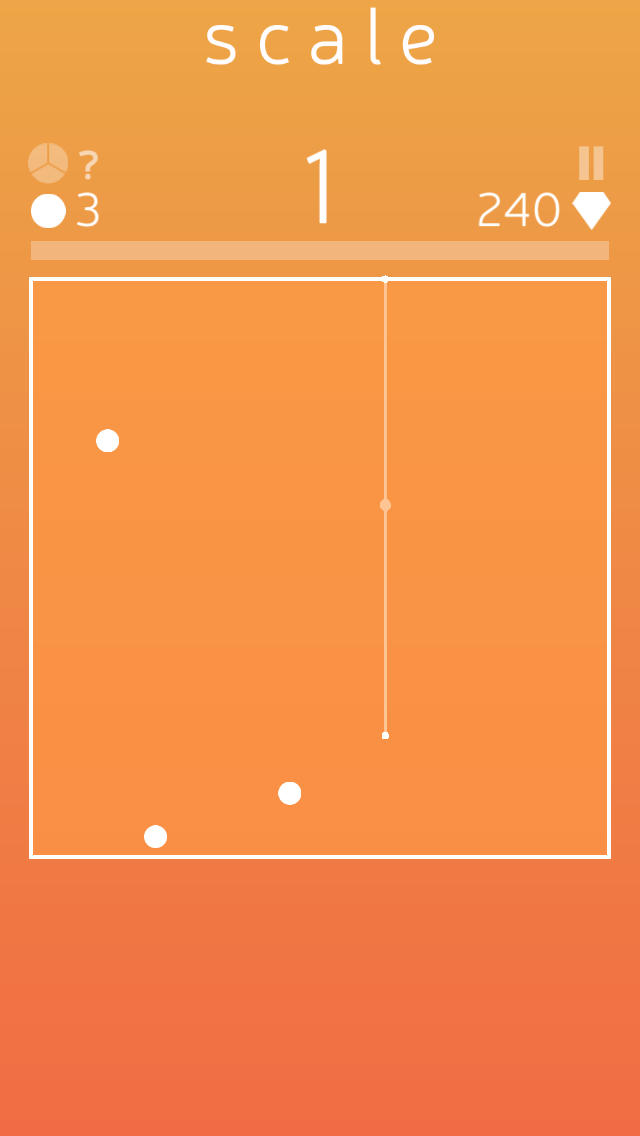 Trio begins every round with three balls. Even if you remove balls with a cut, the next round will start with three.

As in Scale, removing balls counts towards an extra life. You can cut out two balls at once to earn 2/3 of the progress needed for one extra life.

The last mode, Double, doubles the number of balls each round. If you end a round with two balls, you will start with four in the next round. If that round ends with all four, the next round begins with eight.

More than any other mode, Double really requires you to make cuts between balls and dispose of them before scaling up.

In this mode it's less important to make large cuts and critical to instead make cuts that will separate and remove balls. You really want to aim for ending each round with only one ball if possible. This is arguably the hardest of the five modes, and as such, you always begin Double with five lives.