Papa's got a brand new quest

Creature Quest is at it again -- they’re going all out to celebrate the fathers out there in their newest event. From June 13 to June 26, players can join in on new quests and summoning events, while the game’s been re-skinned with a more fatherly theme.

A new Event Quest, Appeasing Poppa, is running until June 27. This exciting quest takes a more . . . intimidating interpretation of Father’s Day. An Astral Watcher descends upon the town with an ultimatum: the watcher requires a valuable gift or the city will be destroyed.

It’s your job as a seasoned adventure to head out and find the gift that will ultimately save the day. You may even find yourself facing down the legendary Astral Watcher himself in an epic battle. Appeasing Poppa grants players the rare chance to capture a Draconic Gallant, and a high chance to capture a Clockwork.

It’s not a Creature Quest party without a Summon Event, and the team behind the scenes has definitely got you covered. The Pillaging Poppas Summon Event starts this weekend, running from June 16 - 18. It’s the perfect opportunity to make any Poppa proud of their fledgling hero. 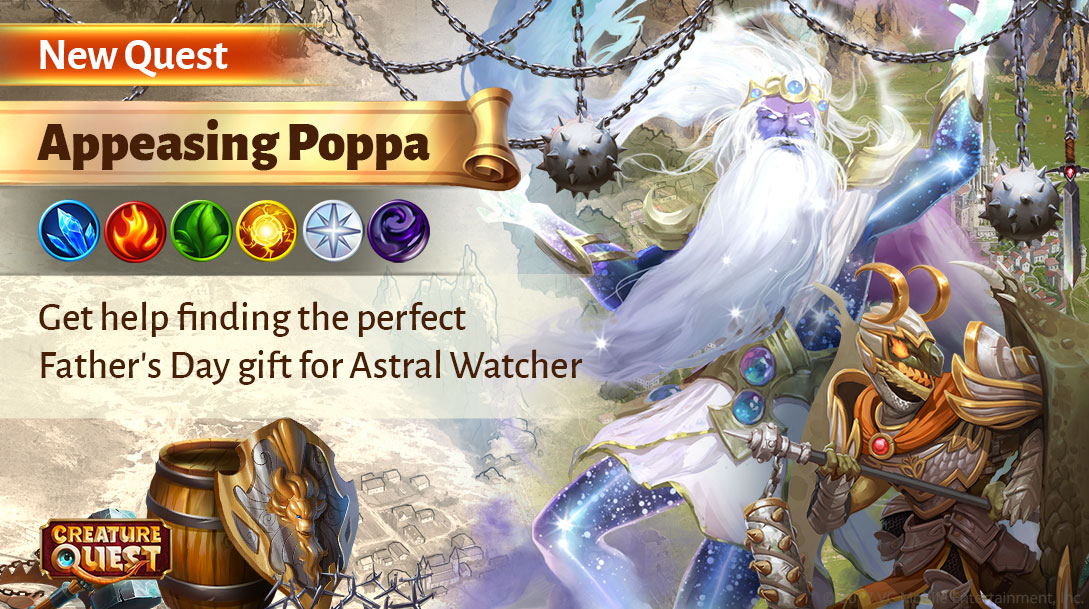 Pillaging Poppas challenges you to test your mettle against a number of Legendary Creatures, including the powerful Astral Watcher. Each Diamond Summon during the event has a chance of yielding a Tool Box that contains one of 10 Legendary Creatures on a paternal theme. The Astral Watcher is making his debut in this event, but you also may capture a Titan, Cyclops, Wizard or Marid. You might also find Epic Creatures including the Gorgon, Walrus Rikishi, Ogre, Shard Golem, or War Elephant. Not bad for a weekend’s work.

Bounzy! is an action arcade game by Gram Games, out now on iPhone and iPad