Mr. Mustachio 2 review - A number puzzler that you can count on?

Mr. Mustachio 2 is a game about maths. It's a puzzler and a brain training experience wrapped into a package of lovely graphics and interesting ideas.

The game takes place on a series of grids. These grids are made up of numbers on coloured tiles. Each challenge gives you at least one number that you need to find using a mathematical function.

These functions are represented on the sides of the grid. Columns multiply, rows add or subtract depending which direction you swipe or which side of the grid you tap.

You need to choose the row or column that gets you the result that the game asks for. To begin with you're only playing on a grid of four numbers, so picking the right solution is reasonably simple. 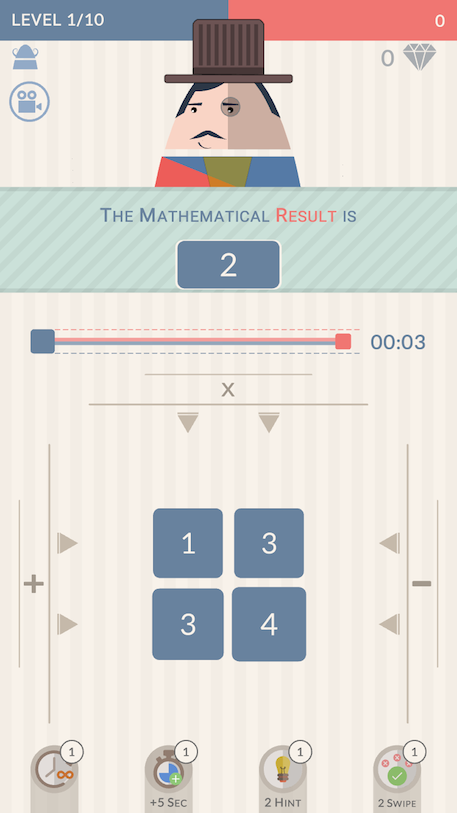 But as you get deeper the game adds more numbers. Then it adds different coloured numbers into the mix, and you need to choose the line in the grid that gives you the right answer for each colour.

There's a ticking time limit as well, represented by a bar at the top of the screen. It adds an edge of panic to things, but that panic often leads to you making rash decisions.

There's an arcade beat at the heart of the game, but it's sometimes at odds with the consideration you need to work out which of the lines you need to choose.

There's fun to be had here, don't get me wrong, but the game can sometimes be a little too challenging. It's very much not for anyone who doesn't like maths, that's for sure.

If you do though, you're going to lap this one up, possibly fanatically. It's smart, it looks great, and it's not like any other numbers game on the App Store.

Mr. Mustachio 2 is certainly challenging, but if you're up to it you'll find a slick and smart game here
By Harry Slater
| Jun 9, 2017 |
iOS
Find out more about Mr. Mustachio 2
SEE COMMENTS