Subdivision Infinity review - A space shooter that's worth checking out

Subdivision Infinity is a deep space shooter with some flashy graphics and a decent story. It rumbles along at a decent pace, and there are lots of explosions. Space explosions are cool.

And it manages to bypass a lot of the problems we've seen with other space flight sims that have been recently released on the App Store.

That's not to say it's perfect, far from it in fact, but there's definitely a lot here to like. And while it might not hold your attention for quite as long as you'd like, you'll enjoy the time you do spend with it.

The game sees you piloting a ship through a series of different missions. They're reasonably small, taking place in tightly packed and gorgeous looking maps.

You'll swoop through wreckage and blast drones to the backdrop of massive stars and distant planets. And it all feels suitably epic, at least to begin with. 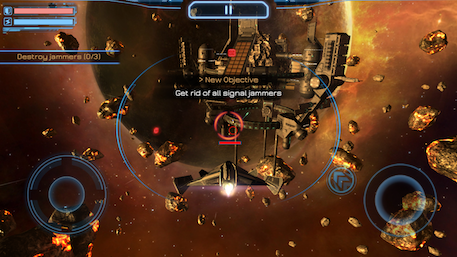 There's no travelling massive distances to get from A to B here. You're dropped into the action from a galaxy map, and you start shooting.

The controls are pretty simple. It's basically an FPS in space. Move a stick to look and another one to dart about. You're flying forwards automatically, and you've got a button that lets you speed up.

You'll earn coins and other items as you play, and you can spend these on upgrading your ship or buying an entirely new vehicle.

There are also mining missions to undergo. Here you just fly about an asteroid field and shoot the big rocks with your laser. It's a bit slow paced, but it offers a break from the dog fighting. 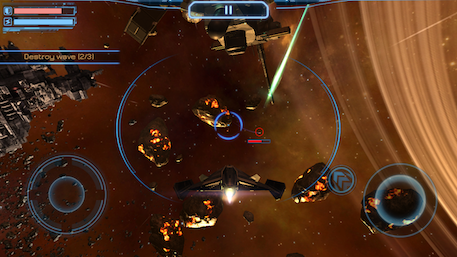 While the game never really lets you get to grips with the vastness of space, it does keep things moving along nicely. The space battles are reasonably interesting, but they do get a little samey after a while.

But you'll probably plough on, just to see what the game is going to offer up next. There are boss fights, new enemies to take down, and the story is reasonably well polished too.

In the end though there's not quite enough here to give Subdivision Infinity a place at the top table of the space shooter genre. It's solid, it's fun, and it looks great, but it doesn't quite sparkle as brightly as it needs to.

That's not to say that it isn't worth picking up. You're definitely going to enjoy the time you spend in its little corner of the galaxy, just be ready for it to frustrate and annoy you a little too often.

There's a decent chunk of space-based action here, but it loses its shine perhaps a little too quickly
By Harry Slater
| May 25, 2017 |
iOS
Find out more about Subdivision Infinity

Ready your insult game as Oh...Sir! The Hollywood Roast hits iOS, Android, and Steam next week

App Army Assemble: Subdivision Infinity - Has Galaxy on Fire got a new competitor?

Fly, fly away in space shooter Subdivision Infinity, coming next week on iOS