Get Me Outta Here is a shooter that's a little more complex than your average arcade blast. It might look simple, but there's actually a complex control system to get to grips with here.

And that means that for the first few rounds you're going to be struggling. Quite a lot. Then, when things start to click, and you realise how important it is to stay out of the way of bullets, you'll find yourself having a lot of fun.

This is one of those games that's worth sticking with. It might be a little rough to begin with, but once everything starts to fizz and bubble, you'll find your scores creeping up and your enjoyment growing.

The game is all about trying to escape from a group of aliens that want to probe you. In time honoured fashion, rather than negotiating, you shoot everything in its big alien face until it explodes in a splodge of goop.

A d-pad on the left of the screen controls most of your movement. Pushing a finger down on the right fires your weapon. Swipe up to jump, down to drop down, and left or right to dodge. 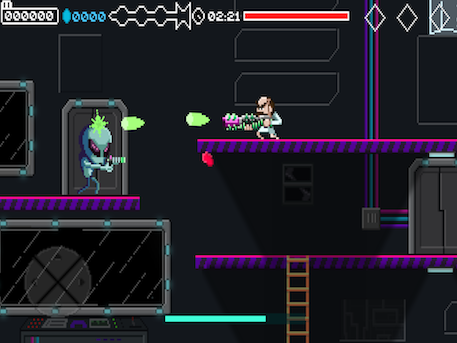 And you're going to need to dodge. Like, a lot. You can't take much punishment, even when you've got the difficult modifiers set as low as possible. Since everything wants to kill you, there's always something flying in your direction.

That might be a rocket, a laser blast, or a genetically altered cow that's firing bullets out of its udders. Obviously.

You get more points for chaining together kills. And there's a healing station somewhere on the level that you can jump into to make yourself feel better. It's on a recharge cycle though. 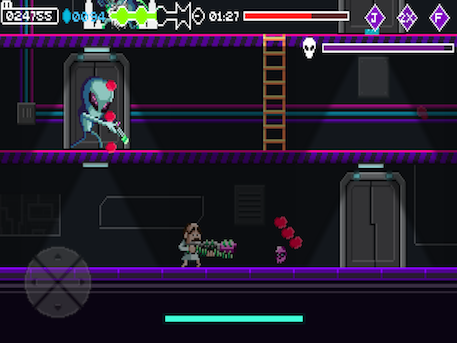 To begin with your scores will be paltry. But once you get the rhythm of the game everything opens up. It's a slick production, and makes you feel like you're actually in jeopardy a lot of the time.

There are problems though. Sometimes your weapons lack a bit of weight. And you're not sure if your blasts are connecting until the alien you're shooting explodes.

These are small niggles though. And there's a lot more to like in Get Me Outta Here. It's fast and frenetic in all the right ways, and it makes you feel like you're getting better with every step you take.

If you fancy some silly space-based slaughter then this one is definitely worth checking out. Just make sure you stick with it.

Get Me Outta Here

It takes a while to get going, but when it does it's well worth the wait
By Harry Slater
| Apr 20, 2017 |
iOS
Find out more about Get Me Outta Here
SEE COMMENTS

App Army Assemble: Get Me Outta Here - Will you cry that out yourself, or is this a keeper?