Real Boxing Manny Pacquiao just launched, and it stars the punchy mega star himself. To celebrate, we're giving away a pair of boxing gloves signed by the man himself.

Real Boxing Manny Pacquiao is the franchise as you know and love it - just with more Manny. You can play as him and take part in weekly tournaments, battle other players in multiplayer, and even feel what it's like to train as Manny in his challenge room.

If you prefer to play as your own boxer, you can still do that. Simply create one, dress him up (even in Manny's own gear if you'd like), and train in the gym to increase your stats. To help you win, you can gather a variety of perks and power ups.

Rather play the arcade experience? No problem. There's a side-scrolling arcade mode for those that just want to have fun. 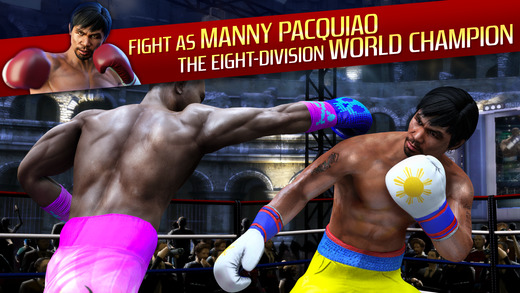 Win a pair of signed gloves

But back onto this giveaway. As we mentioned earlier, we've got a pair of boxing gloves signed by Manny Pacquiao to reward a lucky participant. All you have to do is sign up to the App Army here, then write your name as it appears on Facebook in the comments of this article.

We'll then randomly select a winner on April 27th, announce them the following day in the App Army, reach out to you on Facebook. Please make sure you can receive PMs and that you keep a close eye on your notifications!

Why not go ahead and grab Real Boxing Manny Pacquiao as well while you're at it? It's out now on the App Store and Google Play.

And that's all you have to do. We'll do the rest.