The Elder Scrolls: Legends review - A CCG that takes its time, but gets there in the end

The Elder Scrolls: Legends isn't Hearthstone. I want to get that out of the way as quickly as possible. Sure it's a CCG set in one of the most famous RPG universes, but the similarities sort of end there.

This is a far more dour game, and it takes a while to get going. But there are some interesting twists to the formula here, and plenty for players to sink their cat-people teeth into if they're willing to stick with it.

Is it likely to be as successful as Blizzard's card-chucker? Probably not. But it's still more than worth some of your attention.

The game is a one on one card scrapper in the vein of Magic The Gathering. You've got a deck of cards, a character with a health bar, and a mana pool that lets you toss out your cardy creatures and spells.

You're aiming to murder your opponent before they murder you. You do that by attacking their portrait with your soldiers, monsters, and magical powers. And it's quite a lot of fun. 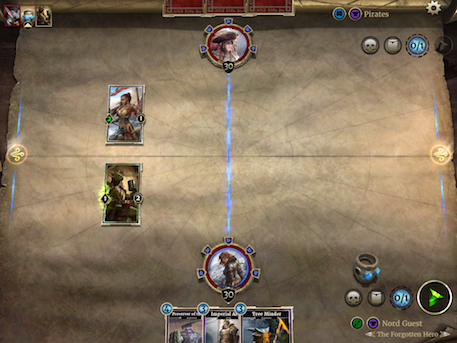 Things start off a little rocky though. The game lays its mechanics on you slowly, so to start with it feels very much like you're just tossing cards at one another until one of you dies.

But then things get more interesting. You get guard creatures that can protect one of the two lanes the game takes place on. These need to be taken out before anyone else, including your avatar, can be attacked.

You unlock new decks as well, and these need different considerations to be played properly. Slowly but surely the depth of the experience opens itself up, and you'll be pleased when it does.

After an hour or so of play you'll finally get to fight it out in PvP battles, and it's here that the game really starts to shine. Simply because taking on real people changes the strategies and skills you're going to need to win. 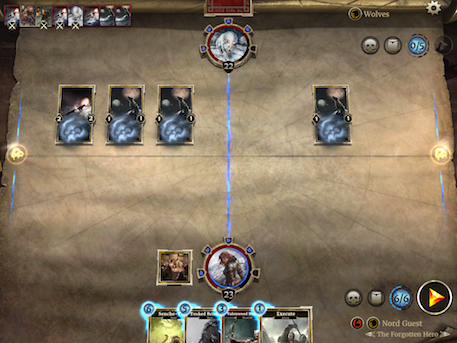 There are daily challenges here too, and plenty of different modes to smash through. It's maybe not as well thought out as some of the other games in the genre, and the wait to get to the PvP is probably going to put some off.

And that's a shame, because if you stick with The Elder Scrolls: Legends you'll find an awful lot to like. There aren't any jokes, but there are a lot of nods to other games in the series.

This is a mobile game that needs you to sit down and take the time to learn it, and that's something that's getting rarer on the App Store nowadays.

So I urge you, pick it up and try it out. There's a lot here to learn, and even more to like. You're just going to have to make sure you're ready for the long haul before you jump in.

Want more? Check out our growing collection of The Elder Scrolls: Legends articles!