The Big Indie Pitch keeps on getting bigger and better. It's an event we run where small developers get to present their in-progress games to press, publishers and pundits. And this year’s Big Indie Pitch at GDC was one of the largest we’ve ever had. Over 120 fresh games submitted, with 30 coming along to pitch live in San Francisco.

From dodging traffic, to flying cats and even a black hole or two, there was certainly a lot to get excited about. You can check out all 30 entrants below.

What’s more, make sure to check out our winners article over on sister site PocketGamer.biz which takes a closer look at the three finalists.
Crashy Cars
By Pixelbizarre
Coming May 2017 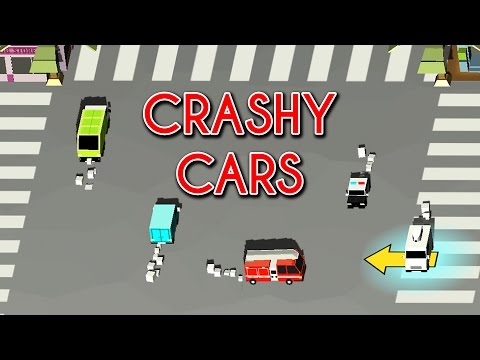 Our winning team created a solid favourite for our judges with this one. Imagine a world without traffic lights on the roads, and you basically have a panic-inducing game. You have to safely direct cars across an intersection without smashing into each other. It’s not as simple as it sounds. 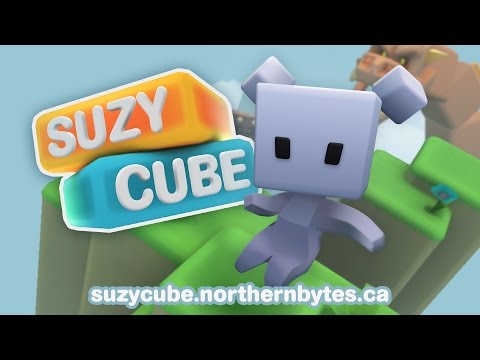 Remember the good ol' days of 3D platformers? (No? Well this is awkward...) Sure you do! Re-live the classic genre with this excellent offering by NorthernBytes Software. Run, jump and solve puzzles in this super-smooth Mario 64-style adventure for mobile.

This atmospheric puzzler takes place in a mysterious and abandoned world, and has players using light and shadow to change the world around them. It’s all very Monument Valley-esque while retaining its own unique style. 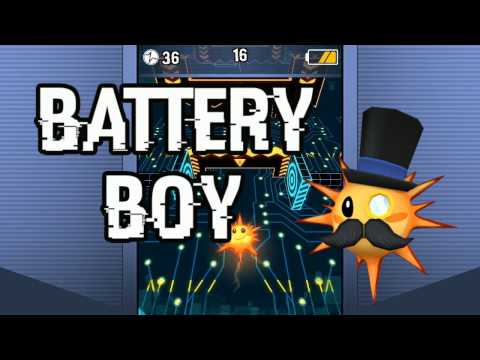 Battery Boy will test your twitch reflexes to the max. The rhythm puzzler has you quickly evading oncoming objects in a game that features fully customisable music tracks and unlocks for different instruments. You’ll need a fast-acting mind for this one. 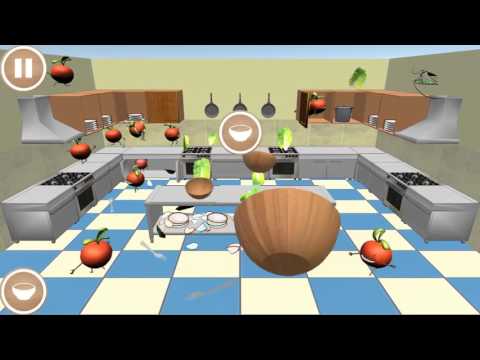 Salad Hunt is an arcade shooter with whacky physics that sees you playing as a chef and trying to save the kitchen from vegetables which have come alive, by throwing whatever you can at them. Naturally. 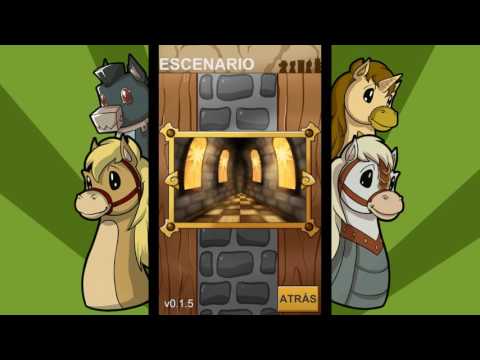 You play as a knight (as in, the horse piece in chess) and must carefully venture across an endless chess board while avoiding obstacles and other chess pieces. The catch is you can only move in an L shape, as in the actual game of chess. Your incoming villains are based on other chess pieces. It's a great way for youngsters to learn the rules of chess in a frantic, scrolling action game.

One of the more unique and experimental titles from the GDC BIP, Metamorphoseon is pitched as a playable poem. It's based on the classical stories of Ovid. Players work their way through the verses by completing actions each related to the words you read. Haunting and beautiful. Keen
By Cat Nigiri
Coming late 2017

Keen is a dungeon crawler and puzzle action adventure all in one. You play as grumpy girl Kim on a journey to stop an evil corporation destroying from her village, all via turn-based movement which requires precision planning to execute attacks and cut your enemies down to size.

Retro fishing game Hook, Line and Thinker will have you racking your brain as you try and solve its puzzles to reel in all the fish in each level. The game features 30 stages, including three boss puzzles.

Wild Guardians
By Corsegames
Out March 2017 Wild Guardians is a multiplayer tower defence game with all the typical gameplay mechanics you might expect from such a title – except for its competitive nature against other players of course. And it’s a bit of a looker, too. Mao Mao Castle
By AsobiTech
Coming March 2017 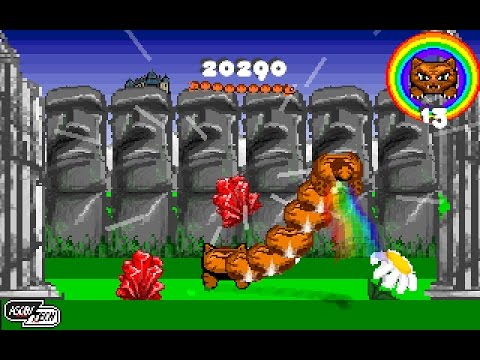 Inspired by retro classics like Space Harrier, Outrun and Afterburner, Mao Mao Castle takes you on a quest to help MaoMao the Cat-Dragon on his quest back to his - can you guess? - castle. Use your finger, or even a LEAP Motion controller in order to collect rainbows and rack up those all-important points, all whilst speed dashing through trees and pillars. But be careful, as you only have nine lives to do it in.

The Biumbis
By 3OGS
Coming March 2017 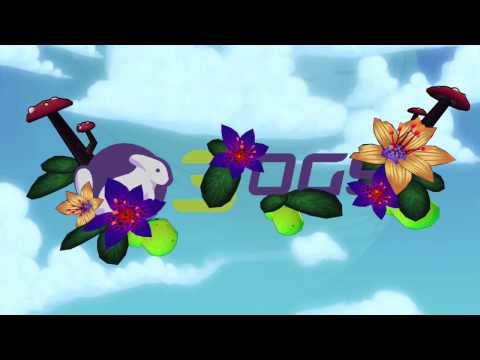 In VR title The Biumbis, players get to dive into an immersive VR world filled with fun colours and loveable characters. Once in this world, players direct the Biumbis by using their head, all with the aim of trying to defeat all of the enemies between them and the magical seed at the end of each stage. Beware though, as there’s a range of toxic drops and obstacles for the little floating beasts to avoid on their way to heal the world. 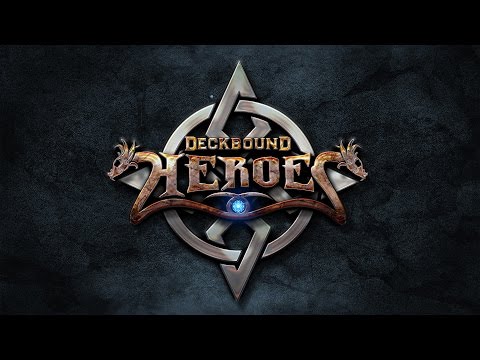 Deckbound Heroes is a turn-based multiplayer strategy card game. Players compete head to head using a points-based deck across a variety of unique maps. There’s also a vast amount of depth too, with cards both levelling up and being trade-able. 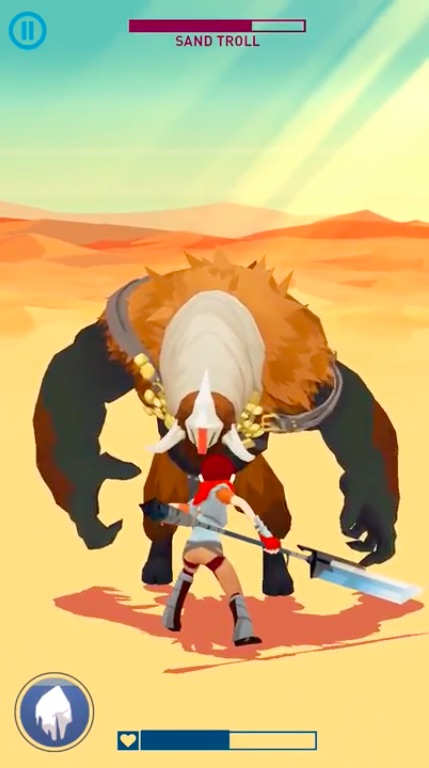 Transform an empty desert into a luscious oasis by feeding the land with the remains of the creatures that roam the land. Quicksand is a game that looks to replicate the sense of adventure found in the likes of the text-based adventure titles of old. As such, expect to traverse and explore large worlds, whilst also growing all aspects of your world through RPG mechanics. 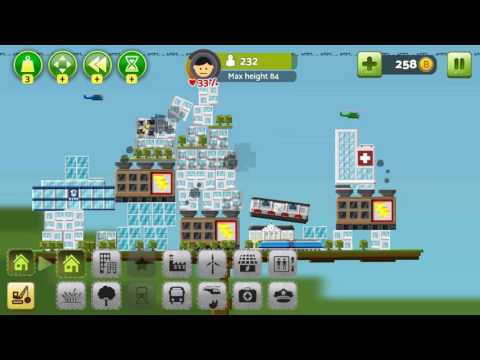 SimCity meets Jenga in this city builder physics puzzler mashup. In BalanCity players must battle it out to build the tallest towering city. What's more, you’ll be able to do this all around the world too thanks to the game’s scenario mode which will take you to the likes of San Francisco, New York, London, Paris, and more.

Orbit - Playing with Gravity
By HIGHKEY Games
Out now 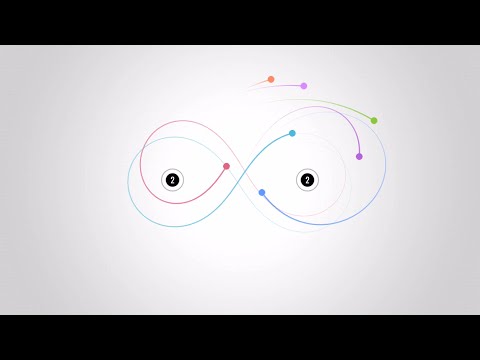 Voila: a puzzle game wrapped in a gravity simulator. Launch planets with the flick of a finger in order to guide them directly into the a stable orbit, in turn avoiding the life sucking black holes. The game even features a nearly unlimited supply of puzzles to solve too, thanks to a community creation feature. Beautiful music makes this a hypnotic experience. 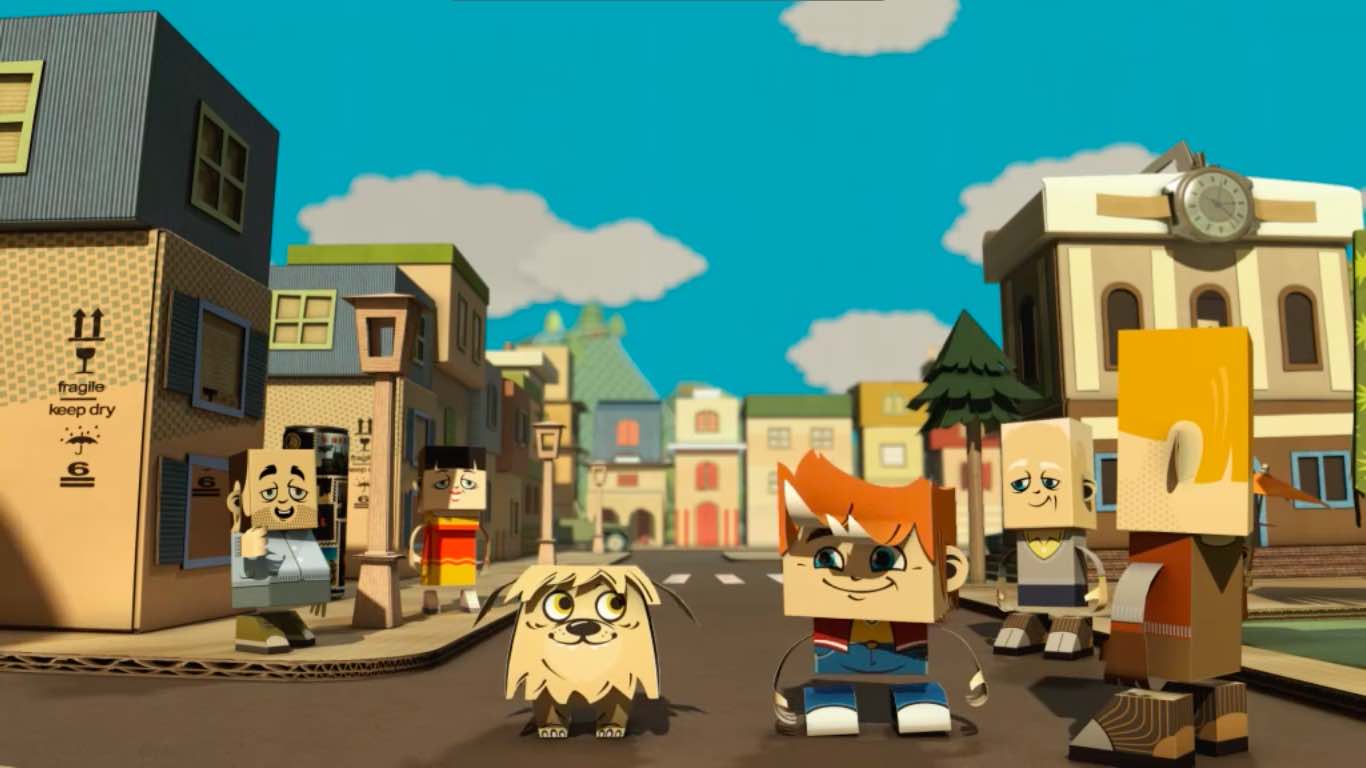 Meet Boxie and his loveable sidekick dog. Based on a European animation series, Boxie is set in a paper-folding universe, one in which players must help our hero and his pet save the town from a variety of woes. You fold locations and characters like cardboard cut-outs to reach new areas. 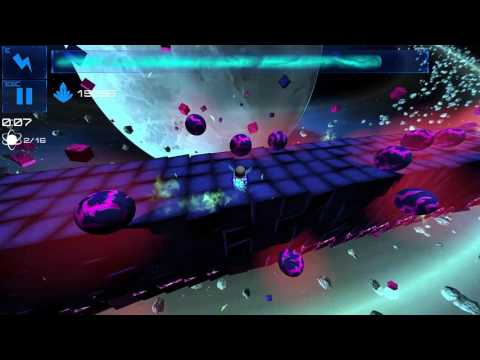 Take a surreal adventure through space, move between unexplored parts of the universe and beware of everything what is purple. Deep Blue is a journey that requires caution, concentration and importantly imagination, as players must find their way through a fast-movie platform architecture and escape on time from destruction. Also, make sure to avoid anything purple! 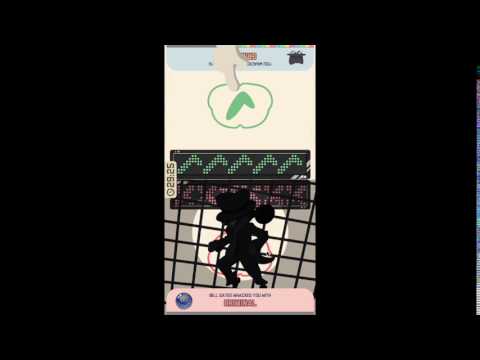 This is a casual title that pits players against each other in a battle of intellect and skill across a range of topics, from geography to maths, pop music to the natural world. You can even take on the whole world in online mode. The judges enjoyed the fast paced player-on-player multiple choice quizzing. 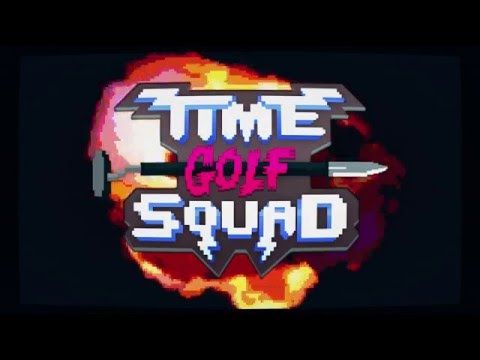 Ever fancied travelling through time and space in order save the universe through the power of... golf? Well if so then Time Gold Squad is the game for you. Players not only get to battle through an extensive range of unique missions, but they’ll also have the chance to take some time out in order to chill in the Game Room with a selection of unlockable mini games.

Fhacktions is a cyberpunk-themed, location-based battle game for mobile. Set in a Tron-like future ruled by hackers, it's a MOBA for iOS and Android where you fight for control of shops, bars and other public spaces in the real world. You can customise your avatars and battles are short, around five minutes. 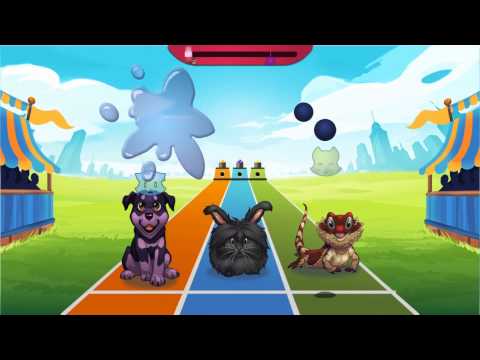 Need a cute cat, dog or iguana to tickle and tease? This idle clicker game is your mobile pet, with over 50 adorable creatures to collect and grow. The game also provides virtual helpers with friendly personalities to help you progress. 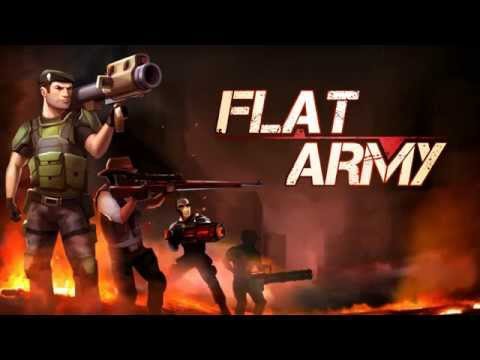 Get ready for frantic action. Flat Army is a 2D side-on shooting game intended for PvP multiplayer online battles. The maps contain destroyable environments - there are more than 60 types of weapon and traps and you can also craft your own equipment. 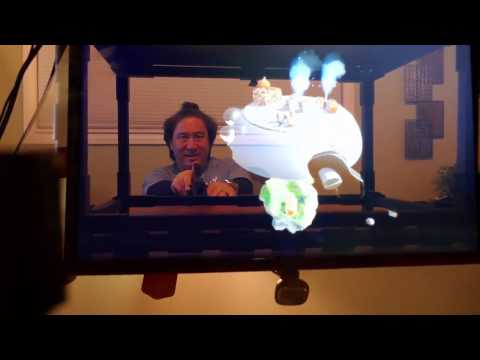 Spatial is a platform not a single game. It's a piece of affordable holographic gaming kit that turns your device into a holographic projector, creating an Augmented Reality experience (no glasses required). It projects what's happening on screen - which could be a game like Defender - into the air above your table, and uses the device camera to interact with your fingers, toys or cards. 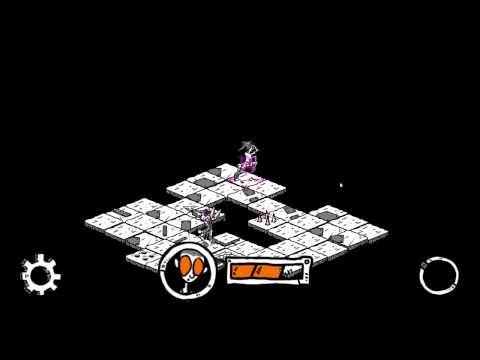 The judges loved the retro aesthetic of this monochrome, isometric puzzles game. It's procedurally generated but draws inspiration from games like Downwell, Don't Starve, and the old Pokemon ice tile sliding puzzles. Push the blocks around the short levels to open wells for you to drop down to the next level. 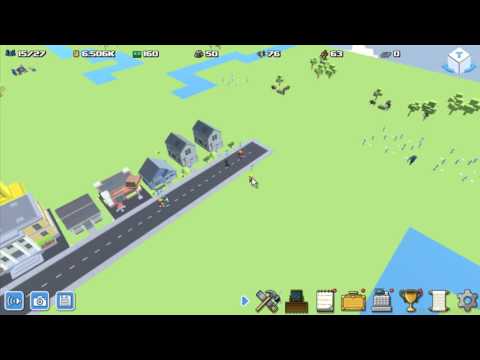 An idle city-building resource-management game, Turbo Town's inspirations are obviously games like SimCity. There are leaderboards for passive online competition, and simple controls for building your own town. The game boasts a whimsical tongue-in-cheek humour and will come to PC as well as mobile. 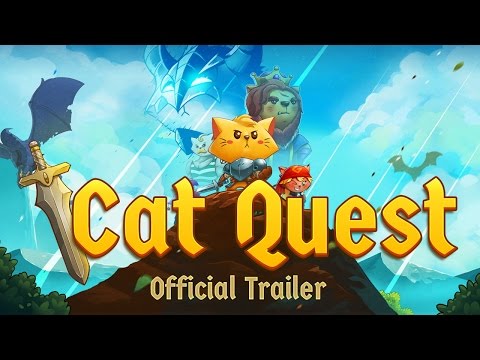 One of our personal favourites from the Big Indie Pitch, Cat Quest is an ambitious indie game - an open world RPG with a cat theme. Think Zelda and Final Fantasy, but with feline puns. You'll explore, loot and meow across 10 to 15 hours of gameplay, in what looks like one of the biggest hand-crafted 2D worlds on mobile.

Trains VR
By The House of Fables
Coming late 2017 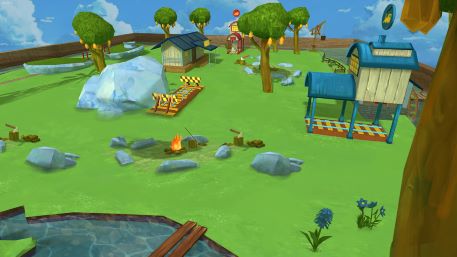 It's a classic rearrange-the-tracks puzzle, but in VR. Build a train set on a virtual table… and then leap into the driver's cabin and see if you crash or not. There are also rewards for building the shortest route, or the most scenic!

Together
By Together
Coming July 2017 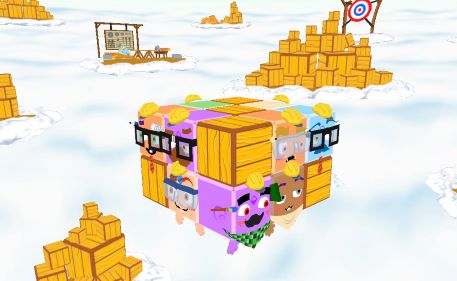 Coming to mobile devices, PC and mobile VR, Together is a block puzzle which encourages you to reassemble cute 3D shapes. You'll need to twist the blocks around in space to make sure they'll fit together. There's an overriding theme of unity and harmony behind the fiendish challenge.

Kitty In The Box VR
By Mokuni
Coming later in 2017 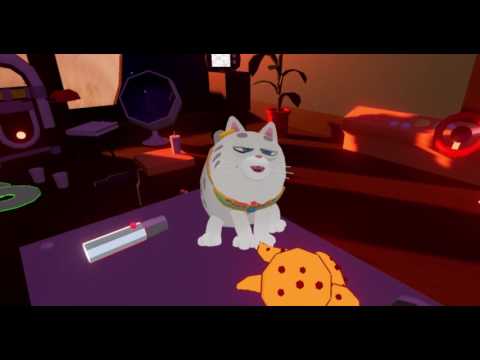 You work in a parcel delivery firm in space. And you've got cats to process! That's the plot behind this story-driven VR strategy game. It's an ambitious project which sees you buying resources, manipulating objects and luring cats into boxes - even defending them from aliens - in a curious first-person experience.