Super Bomberman R review - Does the R stand for resurrection?

The Nintendo Switch was designed with local multiplayer in mind, so it was hardly a surprise when Konami announced it was reviving the long dormant Bomberman franchise on the lauded new hybrid console.

The result is Super Bomberman R, a dolled up Bomberman experience which offers local and online multiplayer (the first on Switch to do so), a story mode, and a variety of character customisation options.

Half a decade may have passed, but little has changed for Bomberman. It's still a primarily multiplayer experience, pitting you against up to seven other bombers in a battle of wits. Blow everyone else up, don't get blown up yourself. Simple stuff.

You collect power-ups to assist you. These increase your things like bomb radius and speed, or allow you to perform actions like kicking and throwing bombs.

Die, and you can win your way back into the fight by taking out an opponent. It's not as easy as it sounds though. You can only travel around the circumference of the arena, and you can't chuck bombs very far, so you'll have to bide your time.

Bomberman diehards will be nodding their heads - this is by the book. So what's changed? 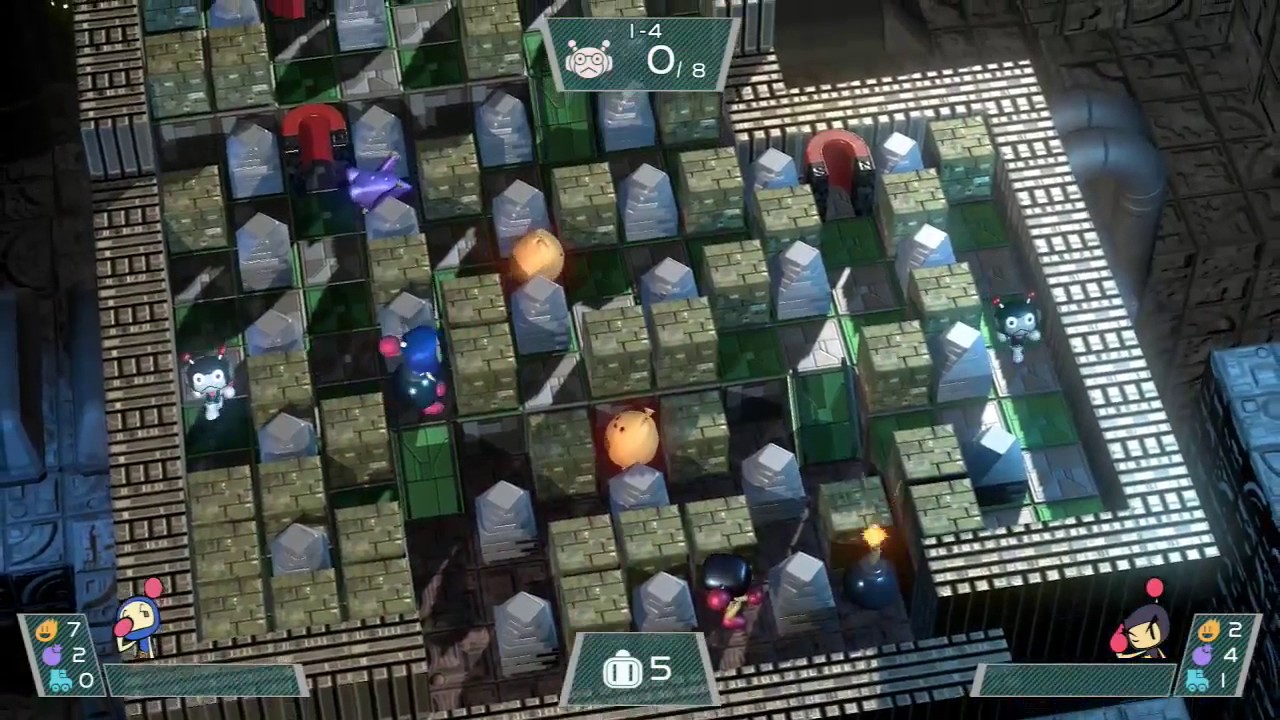 The visuals, for one, are an improvement, but not much so. You won't be gushing over the graphics when discussing with your friends, and you might even comment on the lacklustre bomb animation. This is Bomberman - a game based around explosions - so why are they so limp?

You are given better incentive to play though, and that's all thanks to gems. Play a bunch of battles, and you'll earn currency which can be spent at the shop on a variety of different hats and battle stages.

Apparently, you can buy additional characters as well, but this section was empty at the time of review.

The stages in particular are a nifty addition, periodically freshening up the experience. The hats are a bit naff though. It's nice to customise your bomber, but the designs are a bit bland.

It's silly that you can't just pick the colour of hat you want, instead you have to pay an incrementally higher number of gems until you unlock the hue you're after.

You'll also need those gems during story mode. This features 50 stages across five different worlds as Bomberman and his friends try and stop a bad man from doing something awful.

The plot's reminiscent of a Cartoon Network show, and the animation's just as high in calibre. I can't tell you what's going on though.

It's all there to justify a single player or cooperative mode filled with puzzling levels in which you have to blow up all the bad guys, press a bunch of switches, or collect keys. 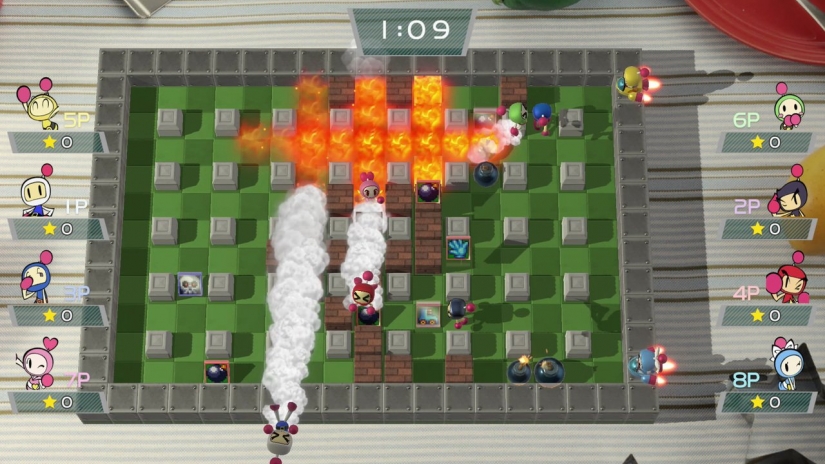 You have to complete every stage with just a set number of lives though, or you have to pay gems to continue. Don't have enough or don't want to? It's back to the start with you then.

It's a nice addition, particularly for those not in the competitive mood, but we've seen it all before. Enemies with different patterns to learn, switches to press, bosses to battle. Nothing groundbreaking.

Super Bomberman R is, for better or for worse, Bomberman as we know and (maybe) love it. Diehards will appreciate the ease at which they can hop into the experience and start blowing each other up.

But even they will balk at the price - particularly as the new additions are so lacklustre. The story mode will provide some cooperative fun but it has no real lasting power, the visuals are nothing to write home about, and the animations are disappointing.

The customisation options provide a nice incentive to play, but are a mixed bag. We appreciated the new stages, but the hat implementation was way off. And if there are new characters to unlock, where are they?

At half the price we'd have an interesting proposition on our hands, but at £59.99 / $49.99, we'd struggle to recommend Super Bomberman R.

If you're the hardest of Bomberman fans you'll probably find something to like - but even then you may be disappointed with the lack of bang for your buck.

Bye-Bye BoxBoy!, the latest entry in the BoxBoy! series, will arrive March 23rd in Europe

Snipperclips review - Is this the real star of the Switch launch roster?