Nintendo Switch Pro Controller review - "How does it hold up against the Joy-cons or DualShock 4?"

Just like the Wii U, Nintendo has opted to release a Pro Controller for the Switch. This is likely to satisfy the core gamers amongst you, who just want a traditional experience when sat in front of the TV.

But at £59.99 / $59.99, it's far from a no-brainer purchase. The Switch already comes with the Joy-con grip which turns the two controllers into an almost-traditional controller, and you can get a DualShock 4 or Xbox One controller for around half of that.

The real question though, is: is it any good? Let's dig into it to help you make that difficult purchasing decision.

The Switch Pro Controller, like the Wii U's before it, mimics the Xbox variety of controllers quite closely. The two joysticks are placed diagonally, with the arrow keys and face buttons placed to the lower, and upper right of them respectively.

Also on the face of the controller are - and + buttons, which serve as start and select, and a home and screenshot button. 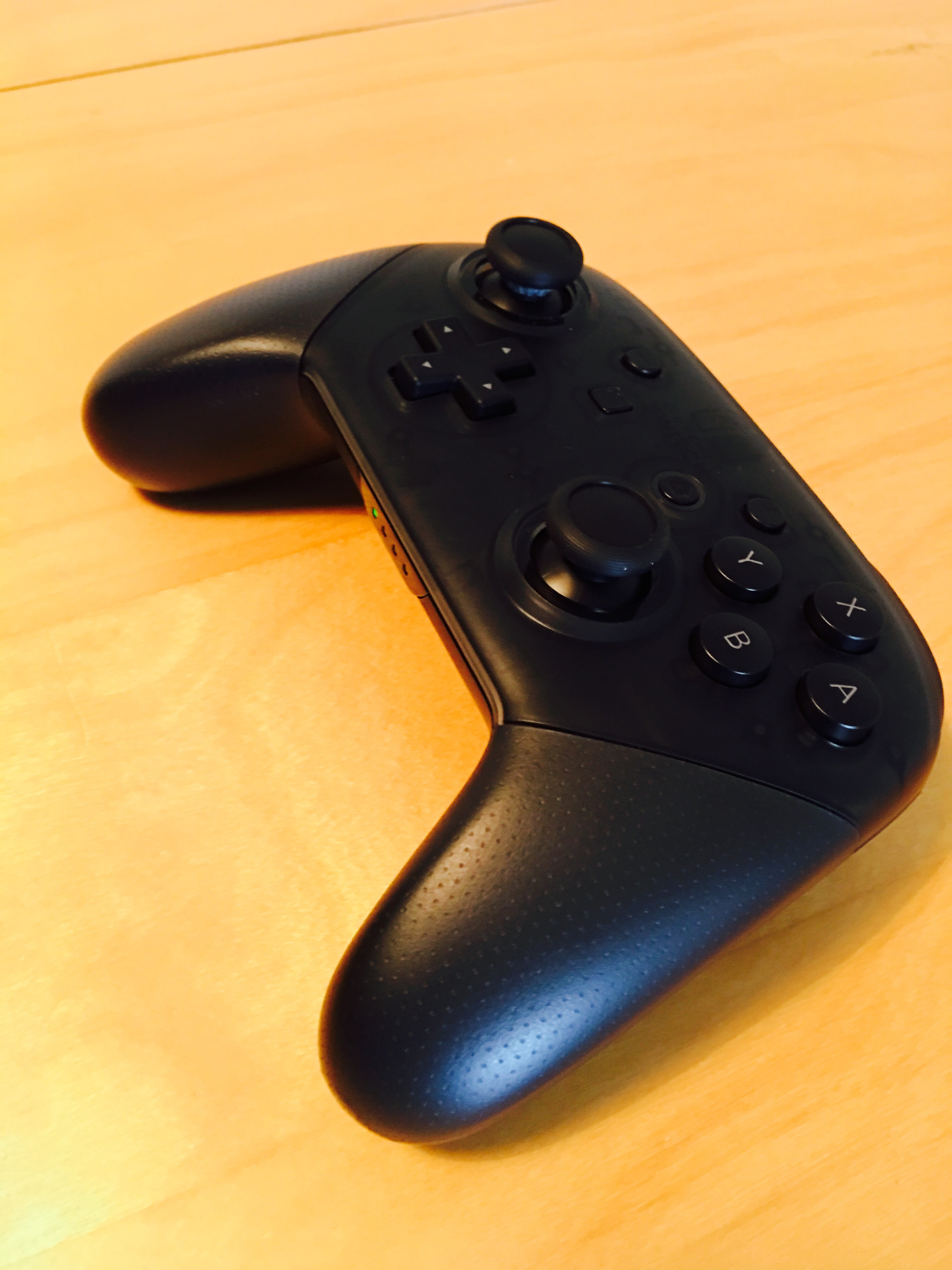 On the rear, you've got two of each bumpers and triggers, and a sync button. This is also where the USB-C charging port is located.

Finally, on the front underside of the controller, there are 4 LEDs which denote which player number you are.

The design itself is nice and premium, with a grippy texture where your palms sit, a transparent matte finish on the face and rear, and a front and rear glossy panel.

All transparent sections have a nice pattern effect on the interior - sort of like hieroglyphics in appearance - and the Switch logo is front and centre.

It's a lovely design that looks a lot more premium and appealing than the Wii U model, with well placed buttons, a nicely textured finish, and interesting art features dotted about.

It's a little heavier than the Wii U Pro Controller, which results in a comfier hold. That's impacted by the grippy finish where your palms and fingers sit, and the rubbery feel of the triggers, bumpers, and joysticks.

You also won't have trouble hitting any buttons. They're nicely spaced, and each one has nice clicky feedback when pressed.

I'd argue that majority of the buttons are improved over the Joy-cons - in terms of feel, if not function - though I did prefer the clickiness of the face and home buttons on the Joy-cons. The + and - keys actually taking that shape on the Joy-cons was also a nice touch which is missing here.

However, the d-pad is an improvement over the arrow buttons on the Joy-cons - though we appreciate that's a design limitation that couldn't be helped.

Against the DualShock 4, it's a comparable experience - though still, ultimately, a lesser one. The grip on the DualShock 4's triggers was, well, grippier, and the lack of analogue triggers hurts the Pro Controller somewhat. 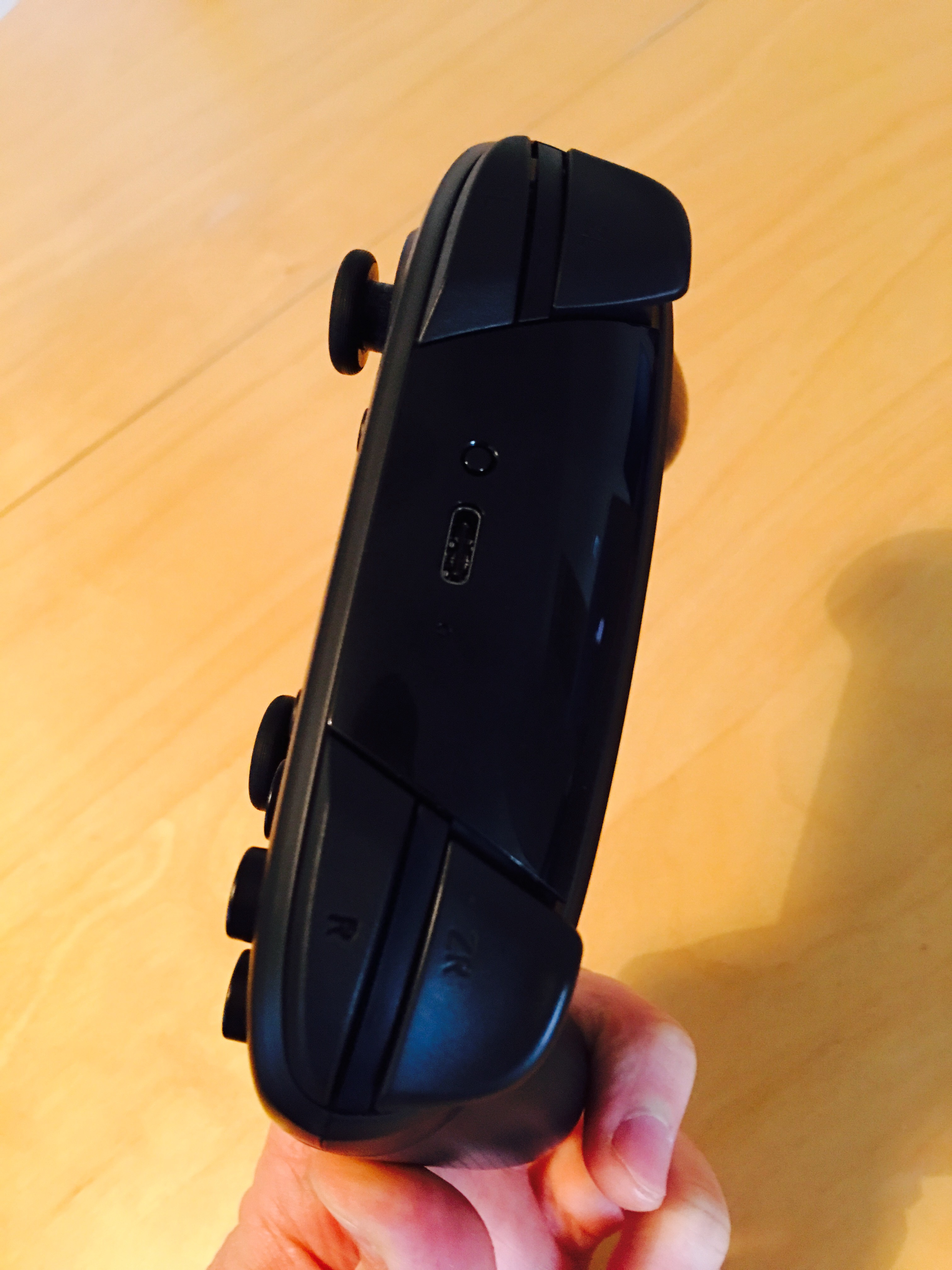 The d-pad on the DualShock 4 is also an improvement, as it feels way clickier than the comparatively floaty Pro Controller.

Not much to say here, other than it has a total estimated battery life of 40 hours when completely charged, and takes about three hours to do so when flat.

It charges over USB-C as well, and you get a cable in the box which is nice. You won't have to be fighting with the Switch for the power cable.

Syncing up is nice and easy as well, with two different options. You can plug it straight into the Switch to sync it instantly, or use the sync function on the main menu of the Switch. That pretty much just involves pressing the sync button on the controller. You won't have problems.

The Pro Controller might be an expensive purchase, but if you're planning on spending a lot of time playing the Switch in front of the TV it's definitely worthwhile.

It is a lot more comfortable than the Joy-con grip, with a nicer weight, improved button layout, and generally improved controls. You also won't have to perform the same finger gymnastics you occasionally have to with the Joy-cons.

For the curious, it doesn't quite hold up against a DualShock 4, with a poorer d-pad, joysticks, and triggers. It is a marked improvement over the Wii U Pro Controller though. This one genuinely looks and feels premium.

So should you buy it? We're not sure. It's certainly a better option than the Joy-con grip - particularly given the syncing issues the left Joy-con is currently experiencing - and it does look, and feel, very nice and premium.

But it's expensive, and you can absolutely get by with the Joy-cons alone. If comfort is paramount, and you have the money, you certainly won't regret this purchase. But if you plan on spending the majority of time in handheld mode, or aren't too fussy, you'll get by just fine with the Joy-cons.

The Pro Controller is not a must-buy, but you certainly won't regret owning one either.

After the End: Forsaken Destiny is a surprising puzzle adventure, out now for iPad and iPhone