Breakforcist review - A Breakout revival with a delicious early-morning feel

There are at least three different puns in Breakforcist's name. It's almost like the dev designed it with my love for wordplay in mind.

And beyond that, there's actually a really good game here. It's takes the shape of retro classics like Breakout, but adds its own modern twist on things.

And when I say its own, I do mean its own. This is a game that bucks the aesthetic trend and scurries off in its own direction, and it's all the better for it.

You control a paddle along the bottom of the screen with a slider beneath it, and it's your job to bounce a ball off the paddle, smashing the blocks that are moving down the screen above.

There are no lives here. If your ball drops below the paddle you get a restart, but the wave of bricks moves further down the screen, giving you less time to smash them all.

I say bricks, because they're square, but really they're breakfast foods. There are waffles, eggs, and all manner of other tasty treats to destroy. And it just so happens that they're haunted by spooky ghosts. 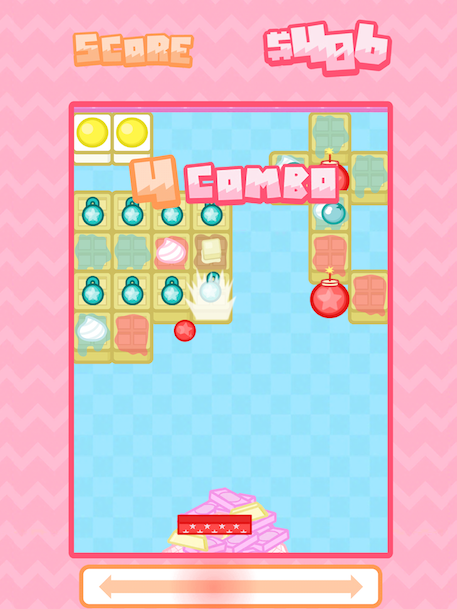 Smashing an egg gets you a power-up. Some of these are reasonably standard - you'll get multiple balls, lasers that smash blocks (although it's actually rashers of bacon), and a fireball that smashes everything in its path.

You'll also get a power-up that fires out lightning, and one that turns your ball into a giant pancake. These buffs stack as well, so you can end up with multiple flaming giant pancakes while blasting chunks of smoky pig from your paddle.

There are challenges to complete, and they reward you with different items. There are songs to unlock, iStickers to collect, and new and more devastating power-ups to grab.

And it all works really rather well. It gets a bit repetitive at times, but there's a delightful mania to the game that makes destroying the blocks feel perfectly chaotic.

Where other arcade games of recent times have been on the sedate side, especially to begin with, Breakforcist throws you into a chaotic maelstrom of waffles and giggles while you figure out what's going on.

This is a polished, well thought through blast, and while it might not have extensive staying-power, it's still well worth adding to your library.

A bright and silly block breaker that's got a lot more going for it than a lot of its kin
By Harry Slater
| Mar 2, 2017 |
iOS
Find out more about Breakforcist
SEE COMMENTS

The Legend of Zelda: Breath of the Wild's just got its day one update, and here's what's in it

[Update] Breakforcist is a fast-paced arcade brick breaker, out now on iOS

Arknights, the popular dystopian tower defence game, has been updated with new storylines and 4 operators