The match-3 is quite common on mobile, but the match-3 RPG less so. However within that subgenre lies some of platform's best, from the lovely named 10000000 and its boat building successor to the party-based battles of Hero Emblems.

Tavern Guardians is developer Wombo Test's debut release and first entry into the genre, and yet it proves to be one of the genre's best, delivering a match-3 RPG where every match feels tactical and the board can be manipulated in myriad strategic ways.

There isn't much of a story to worry about in Tavern Guardians, it's all in the name. Taverns are under siege by wolves, undead, and all other manner of beasts, and your hero must protect the establishments. It's part RPG, part roguelike test of endurance.

A choice of four heroes lets you tackle those monsters in surprising varied ways; the Paladin unleashes holy fire and heals upon bigger matches, the Gunner wields shotguns and rockets, the Mage can transform enemies to sheep then strike them with chain lightning, while the Berserker sacrifices health to deal massive damage.

With their unique skills, both active and passive, each class requires you to consider the board differently, with skills often affecting specific areas on the grid or in specific patterns.

Augmenting those skills are random items, earned through chests or bought from a store after each level. Much like Binding of Isaac, items can be passive gear, stacking to offer powerful buffs, or special tools that can encase enemies in ice or collect all health tiles at once.

But items and skills are only part of what makes Tavern Guardian's gameplay so satisfying. More importantly is that enemies can only be damaged by adjacent matches, meaning that positioning is extremely crucial. Strategically making matches to drop enemies into position can mean the difference between defeat and a massive seven hit chain.

That's no easy task, since Tavern Guardian's bestiary is vast and ruthless. You face a diverse menagerie of creatures that can burrow beneath the board, heal each other, poison tiles or lock them in place, or bombard the tavern with powerful projectiles. 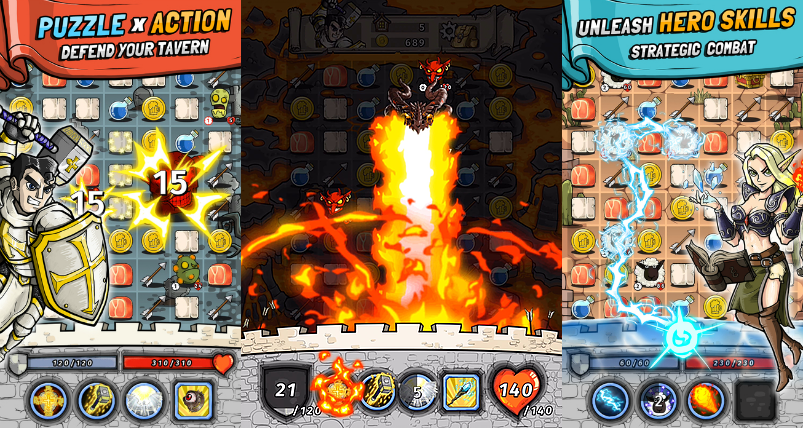 Bosses are even more challenging to defeat, testing your ability to juggle armor, health, skill cooldowns and skill synergies, and effective matches to survive.

Those looking for a deeper RPG elements or more involved persistent aspects won't find them in Tavern Guardians, but even with a focus on high scores, this match-3 RPG offers a surprising amount of strategy and variety. The thrill of facing new enemies may wear off after hours of play, but Tavern Guardians remains engaging and enjoyable throughout.