Shuffle your way to glory in this new action-puzzle game

German publisher European Games Group has officially launched Tiles & Tales in the UK – a free-to-play puzzler for the mobile.

The aim of the game is simple. Zanira is a medieval kingdom beset by monsters. Its survival depends on the bravery of a few plucky heroes taking on the forces of evil – and that’s where you come in. The gameplay of Tiles & Tales cleverly combines the tile-matching antics of popular puzzlers with turn-based RPG elements. There are loads of levels to complete as you progress across the kingdom, as well as daily and weekly quests to keep things interesting.

But every have-a-go hero needs a little helping hand, so here are some tips and tricks to get you started.

At the outset of Tiles & Tales, you can choose between two heroes – there’s Lilly, a squire who is handy with a sword, and Gareth, a prince who isn’t in the least battle-shy. You’re confronted with a vertical map of the kingdom, broken up by levels – and there are hundreds of them.

During each level, you’re challenges with a series of one-on-one battles with members of the Norbold hordes. On the top left of the screen you’ll see your chosen character, and on the top right you’ll see your opponent. You take it in turns to attack, but the power of your attack is determined by your success in the tile-matching puzzle below.

You have a limited number of moves to swipe left, right, up or down to shuffle the available tiles on the board – the number of moves you have left is displayed at the top of the board. Combining matching tiles maximises your damage, loot, health and more. There are different tile types (we’ll get onto that in a moment), so you’ll have to think ahead before deciding on which way to swipe and which tiles to combine. 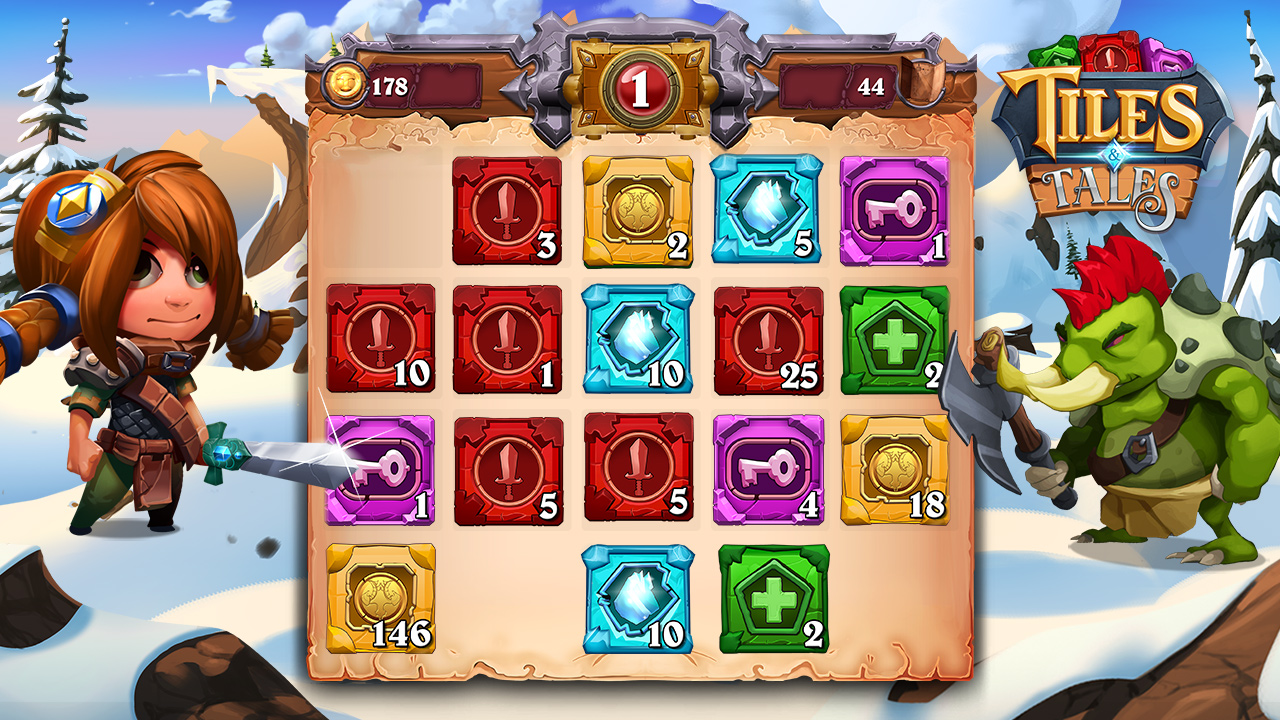 On the board, you’ll see five tile types, differentiated by colours and symbols.

Red (Sword): The red tiles with the sword emblem determine the damage of your attack. The little number beside each one is that tile’s damage points – combine these tiles together to do greater damage. Whatever attack tile on the grid has the highest damage points will be the one used against your opponent during your turn. If the damage points of an attack tile match or exceed the HP of your opponent, you can dispatch them in one go like a badass. If they survive your attack, however, it’s their turn. So watch out.

Green (Cross): The green tiles with the cross emblem determine health points. Each stage includes the periodic appearance of health shrines. You can use these rounds to get back some of the HP you might have lost – combine green tiles together, and once your moves are used up, the shrine will convert the green tile with the highest number into a health boost. Free healthcare – Zanira would be a utopia… if it weren’t for the monsters.

Purple (Key): The purple tile with the key emblem is used to unlock the chests that crop up periodically throughout a stage. Combine the purple tiles to achieve one with a score that matches or exceeds a chest’s entry level, and you’ll crack it open and reap the rewards - typically a special item and some gold.

Yellow (Coin): The yellow tile with the coin emblem signifies gold coins – the most shiny and piratey of all in-game loot. If you successfully open a treasure chest, you’ll receive the amount in gold of your highest scoring yellow tile. Gold can be used to purchase upgrades to make life a little easier as you advance into more difficult stages.

Blue (Crystal): The blue tile with the crystal emblem is used to construct the escape portal at the end of each stage. You’ll have the chance to combine and collect these blue tiles throughout each level – but you have to collect enough to meet the minimum stipulated at the bottom of the screen or you’ll fail the stage! Keep that in mind when you’re deciding which tiles to combine as you go. 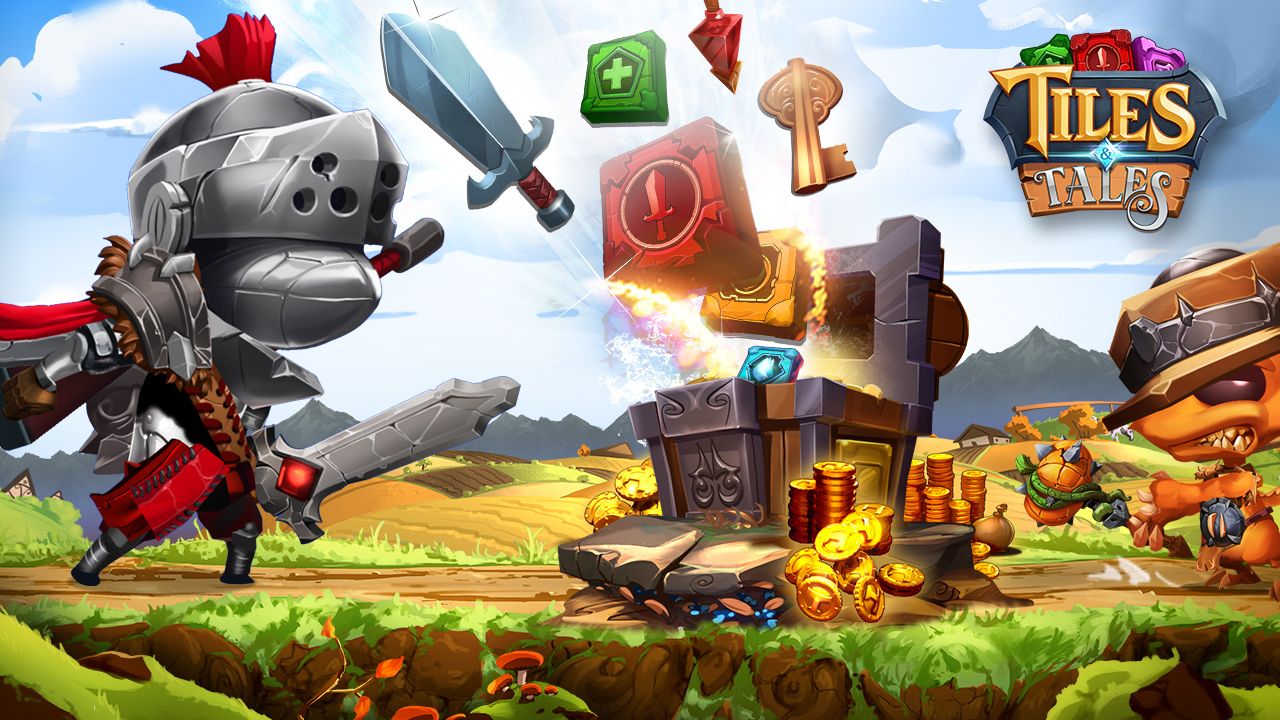 Those locked chests that turn up every so often hold some neat special items that can make the difference between life and death during a round. The special items include:
Sword – If you leave this on the board, the damage you do is increased. Alternatively, if you use it during a turn, you instantly defeat an opponent.

Shield – Leave this on the board, and damage against you is reduced. Use it up during a turn, and you’ll block the enemy’s next attack.

Double-Up – Leave this on the board, and all new tiles will have an increased value. Use it up, and whatever tile you select will have its value doubled.

Swapper – Leave the Swapper on the board, and you’ll have an increased chance of dodging a deadly blow. Use it up, and you can swap two selected tiles with each other. 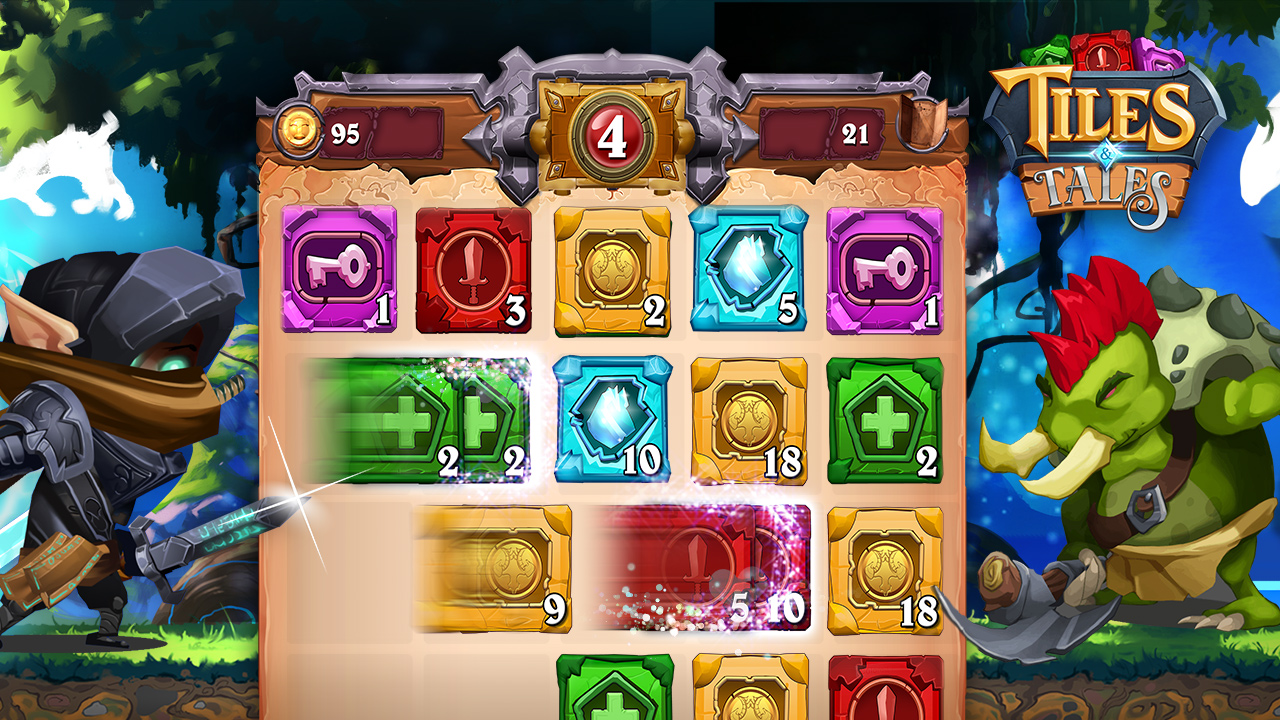 What to do with all that loot

As you go through Tiles & Tales, you’ll be picking up lots of gold coins and rose-tinted diamonds – all that loot is bound to weigh you down in battle, so it’s probably best you spend it. Diamonds and gold can be used to upgrade your skills, as well as unlock new characters including Igua the rogue and Knight Rumford, making progressing through the more difficult stages easier.

You can also purchase gold and diamonds in-game if you don’t want the hassle of the grind.

So now you’re ready to do your bit for Zanira. You can download Tiles & Tales for Android and iOS, or play the game via Facebook.

Retroarch gets a big update on Android and iOS with Netplay, Vulkan support and more

The Zero Escape collection has been delayed on Vita in Europe, will release in March in the US

Swipe, stack, and attack in adventure puzzler Tiles & Tales on iOS and Android